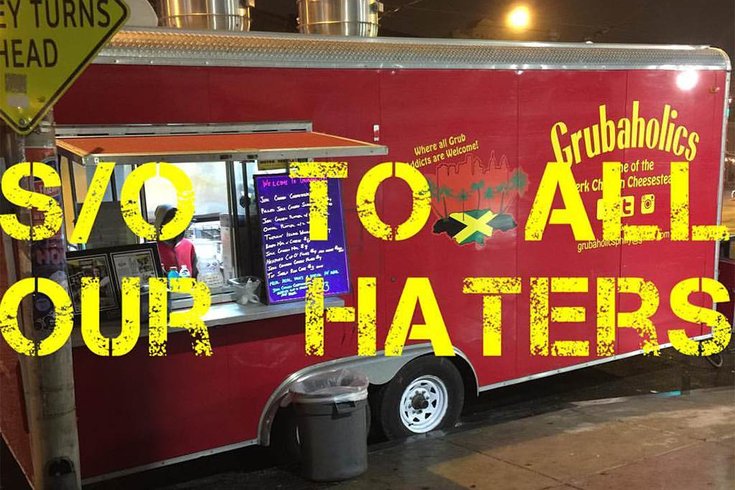 The Grubaholics food truck responded on Facebook to the city's crackdown this weekend on staying open after midnight.

Thinking of grabbing 2 a.m. nachos after a night out in Fishtown? Don't expect your favorite food truck to be parked at Frankford and Girard avenues when the bars let out – the Philadelphia Department of Licenses & Inspections has stepped in after neighborhood residents and brick-and-mortar businesses complained to police.

The result is the sudden – and strict – enforcement of a city ordinance that prohibits food trucks from vending after midnight.

Police said the growing nightlife scene, too much noise, as well as the trash that's been left behind by vendors and patrons has forced L&I to crack down on the trucks, to which Philly officials have mostly turned a blind eye to for years.

Steven Way, owner of BBQ/Tex-Mex food truck Smokin' Tacos, said it had been business as usual last Friday night until three L&I inspectors approached him around midnight and forced him to shut down.

One officer threatened to throw away the food on Way's truck and said his vending license could be taken away if he didn't obey and close down for the night – even though Way's said he's been serving the 2-3 a.m. crowd for about three years, since he first opened.

"My reaction is kind of like, 'What the heck is this about?'" Way told PhillyVoice on Tuesday. "It was pretty tense. A lot of people were unaware and I guess I was unaware."

The rule is indeed true and outlined here in the Philadelphia Code and Home Rule Charter. And as Way was told, the most severe repercussion for a violation could be revocation of a vendor's license if L&I found that the food truck "create(s) a public nuisance, cause(s) a breach of the peace or constitute(s) a danger to the public health, safety, welfare or morals or interfer(es) with the rights of abutting property owners."

Karen Guss, L&I spokesperson, said it has a Public Nuisance Task Force that's so small, that they rely heavily on police to get in touch with her department when they see a problem. Philadelphia Code is so vast, Guss said, that the department can't enforce every rule, which is why those food trucks at Frankford and Girard avenues hadn't seen much pushback until someone found it a problem and spoke up.

"We at L&I like nachos as much as the next guy," she said. "But when the community is grappling with issues like trash, rodents, and when we have to worry about that kind of stuff and the police notes that action is needed, that's when we need to be responsive."

Yo @PhiladelphiaGov you're killing food truck business here in Fishtown! Frankford & girard is the best place 2 get food after Bars close👎🏾

I hope there's some sort of food truck parked near Frankford and girard post 3 am today!

Sean Kong-Quee said in the seven years he's owned of the Caribbean and Latin food truck Calle Del Sabor, there's never been a problem. This will hurt his business badly, said Kong-Quee, who relies on the late-night crowd for big bucks.

He said he's forming a tangible paper petition while one of his neighboring food trucks, Grubaholics, has already started a Change.org petition called, "Help us keep the late night food trucks open after midnight."

Its main purpose is not the break the law, but change it. It reads:

Vendors are encouraging patrons who are upset about this spontaneous enforcement to reach out to First District Councilman Mark Squilla, who represents Fishtown.

A spokesperson for Squilla's office declined to comment on the issue on Wednesday, except to say the office had not gotten any complaints.

Philadelphia police Sgt. John Massi, of the 26th District which covers Fishtown, said he had to bring L&I into the situation because of consistent complaints he has gotten for years and that talking to vendors and ticketing them hasn't been working. Vendors left trash behind, poured grease onto the sidewalk and caused traffic by parking in places they shouldn't be.

"At some point, I gotta do something," he said.

Massi said he doesn't feel bad for the food-truck vendors because they're not following the rules.

Vendors – and even Guss – said they hope the new, strict enforcement of the midnight curfew for food trucks won't last forever, though Massi said he plans to keep the rule going indefinitely.

Rob Mitchell, president of the Philly Mobile Food Truck Association, said he's aware it's illegal to vend after midnight, but he knows the city's market for the late-night snacks remains strong.