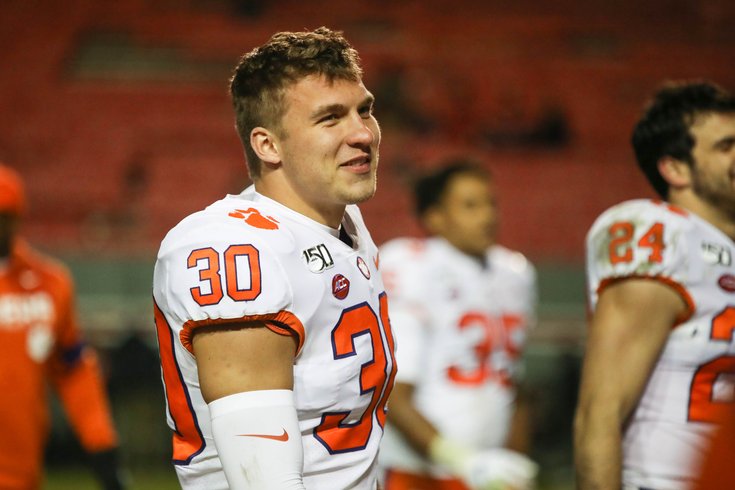 At Clemson, there is a long-standing tradition when the Tigers emerge from the team bus and enter Memorial Stadium. Before each home game, they run down “The Hill,” which rests above the east end zone, and each player will touch Howard’s Rock. That’s when it dawned on Keith Maguire that he wasn’t in Media, Delaware County, anymore.

Looking down from the hill’s apex back in August, the 6-foot-2, 230-pound true freshman linebacker from Malvern Prep was smacked by the reality that he was about to enter the enormous world of major college football.

Maguire is going to make a more significant step tonight, on the sidelines for Clemson during the national championship game against LSU at 8 p.m. from the Mercedes-Benz Superdome, in New Orleans, La.

Maguire, who has seen time in four games in order to keep his red-shirt status, has made the most of a limited role, credited with two tackles (one for loss), an interception and nine defensive snaps over his four games. He made his collegiate debut in the Tigers’ season-opener against Georgia Tech, recorded a three-yard tackle for loss at Syracuse and had a tackle against Charlotte. He came up with his first career interception in the ACC Championship Game vs. then-No. 22 Virginia.

And tonight, in the College Football Playoff title game between the third-ranked Tigers and No. 1 LSU, Maguire will be the only player on either team from the Philadelphia area. Maguire may see some time on special teams or play a sparse role on defense, but there’s no doubting that he loves Clemson and being a part of such a rich experience in his first year of college football.

Not to mention that he’ll have the best seat to observe the must-watch game.

But, that’s the small problem. Keith Maguire, a red-shirt this season because of Clemson’s deep linebacking corps, has never sat and watched anything before in his life. He’s always been a game-charger since he first tugged on a helmet. It’s one of many adjustments the local star has had to make in his first season at the national powerhouse.

“The work and film study, the time you actually put in at practice — and we watch more film than we do practice — so I would say that’s been the biggest adjustment from high school to college,” said Maguire, whose neck is like a bridge cable and his weight has jumped 10 pounds since he played for Malvern. “You have to keep your body right and make sure you don’t get too sore.

“When I first got here in the summer, we had a 5 a.m. workout. I had to get up at 4. You prepare yourself to put the work in. I was in bed around 10 the night before, and drove over in the dark for the workout. That’s when it hit me that this was going to be different. But it became real when I went down the hill [for the season-opener against Georgia Tech]. Once I was on the field, it was just football again, like I was back at Malvern locked in and focused on what I have to do to win.

“But it was pretty cool, looking around at all of these people in orange, thanking God. After I touched the rock, it all left and I couldn’t wait for the game to get rolling.”

Maguire is a stellar athlete, so the game speed and physicality of major Division I football was not an abrupt introduction. The only thing that kept him off the field this season was his overall knowledge of the defense, which he’s consuming in large chunks. He admits he’s still getting it, calling strengths, where weakside help is, being able to know what everyone is doing and where they should be so he can play fast and physical.

He knows that will come in time.

It’s a grind. Everything is regimented and exact to the minute. Maguire schedules his day down to when he takes naps and Clemson’s 10-hour per week study hall requirement. His days start at 7 a.m. and end around 9-9:30 p.m.

LSU is a great team. But so are we, and it’s something we don’t get credit for. We hear things like we don’t play anyone, but we know what we can do... To the media, we still have one more game to prove it.

“You’re tired at the end of the day, [so] you re-energize and start it again the next day,” said Maguire, who took Jeremiah Trotter Jr. under his wing during his recruiting visit to Clemson. “I’ll admit, it’s hard to watch. But I have to be honest, I don’t know the defense so I can't play the way I’m able to play. Sitting was hard in the beginning, but I am learning and I’m really part of something special here. I made the right choice by coming here. The coaches are awesome here, the players are awesome here.

“This is a special team, and it’s special because there are a lot of stars on this team, but you wouldn’t be able to tell. Everyone from the starters to the scout guys treat each other the same. They’re all close. They’re all great guys. No one big times anyone. Trevor Lawrence, Tee Higgins, Isaiah Simmons, they’re all good guys that it seems you’ve known for three years. That’s the one thing, you don’t feel like you have to be put in your place and reminded that you're a freshman.”

“Coach Swinney is a real dude,” said Maguire, who shares something rare with his head coach, the same birthday, November 20. “That’s the thing with coach Swinney, he’s a real guy. What you see on TV and everything is what you get and who he is. He’s a real guy, who’s pretty funny. And one thing about this team, we’re better than people think.

“It’s going to be a war [on Monday night]. It’s going to be a great game. LSU is a great team. But so are we, and it’s something we don’t get credit for. We hear things like we don’t play anyone, but we know what we can do. The media sees a confidence in us, because they don’t like us to win, but we keep our heads down and play against each other every day in practice. We face the best each week. We find a way to win, and we proved ourselves. To the media, we still have one more game to prove it.

An ongoing standard, it seems, that will go forward with players like Keith Maguire.