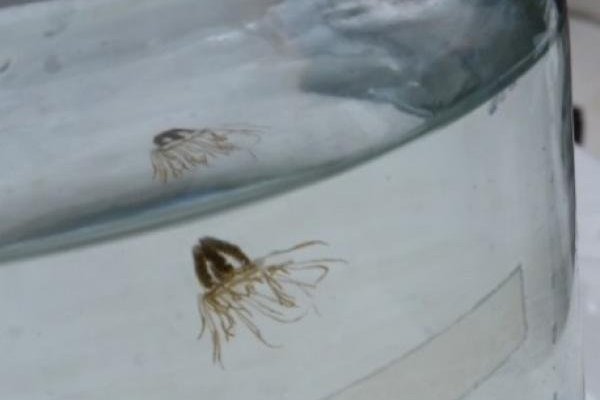 Researchers have found that clinging jellyfish, a spider-like invasive species with a powerful and debilitating sting, have reappeared in New Jersey waters for the fourth straight year.

Researchers have spotted hundreds of young, clinging jellyfish along the coast of the Jersey Shore this month — just in time for Memorial Day weekend revelers.

Clinging jellyfish, native to the Pacific Ocean and introduced invasively only recently to New Jersey's coastal waters, have between 60 and 90 tentacles that contain stinging cells. They typically are found in bays and surrounding estuaries, where they can cling to vegetation.

CBS New York reported that researchers have started to pull algae from waters to investigate how prevalent the jellyfish will be this summer. So far, they've found between 200 and 300 of them. Last week, NJ.com reported that small jellyfish, from one to nine millimeters in diameter, were also found in Barnegat Bay and the Metedeconk and Shrewsbury rivers.

PhillyVoice reported the species originally came to the East Coast in 2016 and have since hospitalized dozens of swimmers and fishers who didn't know to look out for the dime-sized, nearly-invisible sea creatures with painful stingers. The stings of these little guys is so debilitating that victims reportedly have had to use morphine drips during hospitalizations. In 2016, water sports events in nearby rivers were even canceled due to the risk of their presence.

In 2018, the New Jersey Department of Environmental Protection developed an interactive map so residents could track where they were last spotted. The jellyfish were found in waters east of Island Beach State Park, Mantoloking, and Monmouth Beach.

But these jellyfish are typically active during unseasonably warm weather and increased water temperatures, so it's no surprise Memorial Day weekend is marking their 2019 return.

Ocean temperatures down the shore this weekend are expected to be in the mid-to-low 60s.

Scientists are still actively investigating how the jellyfish impacting the native plants and animal species and why they came to the Jersey Shore in the first place.

If you're stung by a clinging jellyfish, here are some steps you can take, via the New Jersey Department of Environmental Protection.