The controversial monument has been concealed for more than 2 years. Its fate remains undecided amid a legal dispute 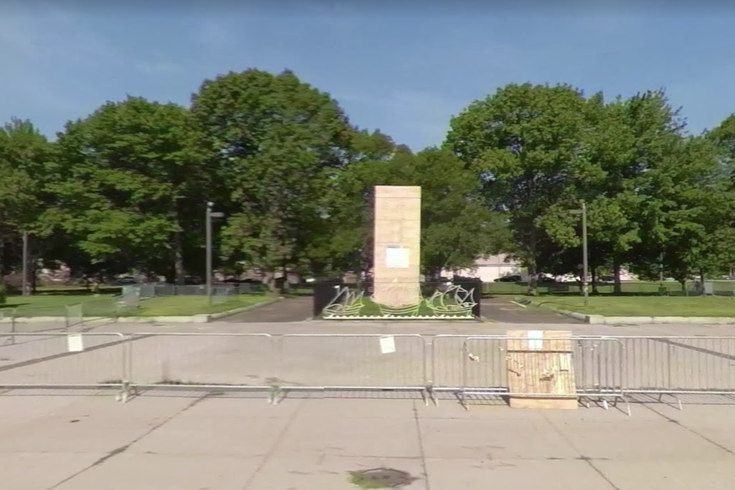 On Friday, the plywood box concealing the controversial Christopher Columbus statue in Marconi Plaza was painted in the red, white and green of the Italian flag. The photo above shows the box before it was painted.

Over the weekend, the box concealing the statue in Marconi Plaza was painted in the red, white and green of the Italian flag. City officials refurbished the box per the request of district Councilmember Mark Squilla, KYW reported.

MORE: Woman's urn returned to daughter after washing ashore in Ocean City, more than a year after her death

Residents who gathered in the park for an Italian American heritage festival and parade Sunday afternoon said city officials agreed to paint it as conciliation in the ongoing struggle over the statue's fate, the Inquirer reported.

You can’t make this up.

The Columbus statue has been covered since 2020, when an armed group of people clashed with a group protesting for its removal. Those in favor of preserving the monument say it is a cultural representation of their Italian heritage, while those in opposition view it as a symbol of oppression.

In 2020, a pair of city commissions voted to place the statue in storage, drawing a lawsuit filed by the volunteer group Friends of Marconi Plaza.

Last October, Pennsylvania's Commonwealth Court ordered the statue to remain covered by the plywood box – not long after the Court of Common Pleas ordered it to be uncovered. The legal case remains ongoing.

Though there are people who see the paint job as a compromise, others view it is a step backward.

"It doesn’t seem like the right direction to continue to celebrate and attach themselves to somebody who has a history that is so complicated and problematic," Mabel Negrete, executive director of Indigenous Peoples' Day Philly Inc., told the Inquirer.

In previous years, South Dakota, Alaska, Oregon and Vermont officially recognized Indigenous Peoples Day as a holiday, with several other states celebrating it through proclamations. Indigenous groups have called for Columbus Day to be replaced, noting the Italian navigator brought genocide and colonization to people who had been living in America for thousands of years.

In 2021, Philadelphia Mayor Jim Kenney signed an executive order changing Columbus Day to Indigenous Peoples Day on the city government calendar as part of a larger initiative to promote racial justice. The city has tried to reframe Columbus Day celebrations by referring to Sunday's parade as the Italian Heritage Parade and declaring this week "Italian Heritage Week."