The money is intended to help business owners impacted by the COVID-19 pandemic, which research shows disproportionately affected those owned by women and people of color 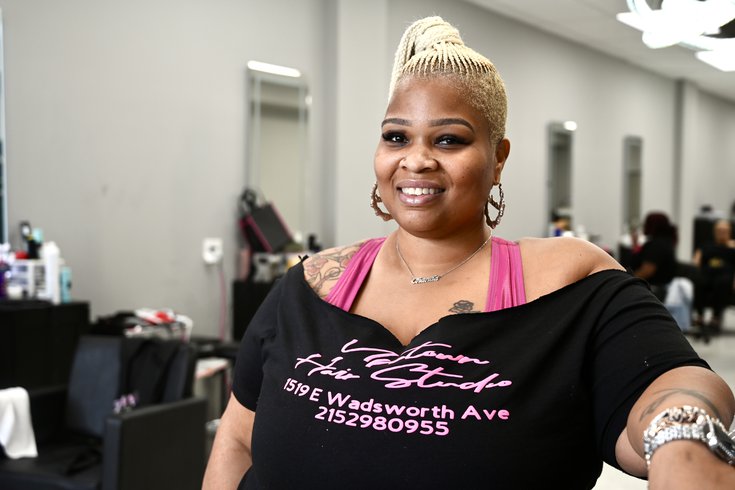 Chanda Anderson, who owns two hair salons in the Cedarbrook neighborhood of Philadelphia, said she received a $10,000 grant through Comcast RISE last year to help their businesses during the pandemic. Comcast RISE is preparing to award more grants to Philly business owners; Applications will be accepted June 1-14.

Small businesses in Philadelphia with minority or women owners, that were impacted by the COVID-19 pandemic, can apply to receive $10,000 grants from Comcast through the telecommunications and media company's RISE initiative.

There will be 100 businesses selected to receive the grants. Applications will be accepted online from June 1 through June 14 via the Comcast Rise website. In addition to a businesses being owned by a person of color or a woman, it must have 25 or fewer employees and been in operation for at least three years in order to be eligible.

There are no restrictions on how businesses receiving the grants use the money. When Comcast RISE grants were awarded last year, Chanda Anderson, who owns two hair salons in Philadelphia's Cedarbrook neighborhood, used the $10,000 to purchase hair for her customers.

"At a time when I was seeing one client a day in my house versus five to seven clients a day pre-pandemic, it helped more than you can imagine," Anderson said.

Doverne Moore, who owns a commercial cleaning business in East Oak Lane called A Green Thing Environmental Services, said the grant helped him pay staff and purchase new equipment during the pandemic. And Kariema Milligan, who owns an electrical construction company, the Milligan Group in East Germantown, said the $10,000 allowed her business to keep doing work for the School District of Philadelphia.

During this latest round of RISE grants, in addition to the money being awarded in Philadelphia, 100 grants, each for $10,000, will be awarded to minority- or women-owned small businesses in Pittsburgh, Atlanta, Detroit and Minneapolis-St. Paul

In addition to making monetary assistance, Comcast RISE awards grants for marketing services and technology makeovers to small businesses, applications for which are being accepted now through June 17.

Comcast RISE is part of Comcast's Project UP, a $1 billion, 10-year campaign to promote digital equity. RISE recognizes that minority- and women-owned small businesses were disproportionately affected by the COVID0-19 pandemic.

During the first two months of the pandemic – from February to April 2020 – the number of small business owners, overall, decreased by 3.3 million, or 22%, according to research by University of California, Santa Cruz Economics economics professor. Those declines were steeper among business owners who are Black (41%), immigrant (36%) Latinx (32%) Asian (26%) and women (25%).

Philadelphia's economy continues to recover from the pandemic. Delinquency in paying bills among Philadelphia's small and midsize businesses steadily declined through 2021 to 7.1% but that was still its highest point since March 2020, according to the lates Pew Charitable Trusts annual reports on the city released last month. The city's unemployment rate had fallen to 5.8% in December, about where it was prior to the pandemic, the report said.

Business owners interested in applying for the latest round of Comcast RISE grants must include one of the following with their applications: incorporation articles, partnership documents, official registration, or business license. They also must include a W-9 form for their company and their social security or employer identification number.

RISE is an acronym for representation, investment, strength and empowerment.