A first-ever food event rolls into South Jersey on Sunday 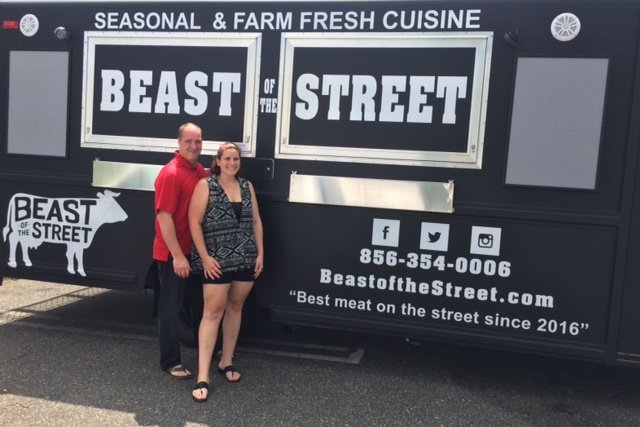 Ridgeway Grace and her husband, Mark Rooks, debut their new food truck Sunday at a festival of food trucks on Sunday at Cooper River Park in South Jersey.

Come hungry, but buy a ticket online. And bring some cash.

You'll need it when you visit the Bacon Broad, the "Beast of the Street" and the Cannoli Express, all participants in the SJ Food Truck Festival at Camden County’s Cooper River Park on Sunday. The event goes from noon to 8 p.m., according to organizer Lori Deslandes.

The first-ever food truck festival could be major draw to the park. As of Thursday afternoon, Deslandes’ Facebook page said nearly 3,000 people have plans to attend.

That’s a pretty good measure of the current popularity of what once was a lowly old West chuck wagon, became the ubiquitous taco truck and is now a Zagat-rated phenom.

Deslandes, who has organized 5K foot races at the county park, decided on the food truck fest after seeing one in Atlanta.

“This concept is not new, but there are not any in that area and people are tired of having to go to a metro area for events,” said Deslandes, who has more plans for food truck festivals later this summer in South Jersey.

“There is plenty of room, the view of the river and lots of grass for people to sit on. The location is central to many neighborhoods,” she said.

The festival will include a DJ, a jazz group and a classic rock band, kid activities, vendors, an obstacle course and dancing contests, she added.

And patrons who vote for a favorite food truck can win a $500 prize at the end of the night.

But of course, food is front and center.

And while there is not enough space here to talk to all the truck operators, what better way to start than with dessert?

Mannino’s Cannoli Express has had a food truck for the past two-years, but operator Gaby Mannino began selling her hand-filled cannolis eight years ago at the Hammonton Blueberry Festival, in a town where folks know a thing or two about the Italian pastry.

While she operates out of Folsom in Atlantic County, she makes the filling at her family’s Italian restaurant in Pitman, Gloucester County.

She buys shells baked in Sicily. They are wider than many domestically-made shells – more room for filling – and have a distinctly vanilla flavor.

What’s in the filling, either plain, chocolate chips or blueberry?

Mannino laughs. “A lot of love. And sugar,” she answers.

Those looking for something meatier may want to consider a bacon patty.

It's a best-seller for Renee Eaton, AKA the Bacon Broad. The Burlington County woman has been in the food truck business for the past three years and is a fixture at the gigantic Columbus Farmer’s market in South Jersey.

She fashions the patty from a quarter pound of bacon.

Other faves are a hunk of bacon on a stick, baked potatoes loaded with bacon and macaroni and cheese sprinkled with bacon.

Oh, and bacon-covered strawberries, though she won’t have them at Cooper River.

“I do a different dessert for every event,” and she’s not yet certain what she’ll do for Sunday.

The Cooper River event is the debut for a truck dubbed “Beast of the Street” by married couple Mark Rooks and Ridgeway Grace of Cherry Hill.

While the truck is new, the couple are veterans of the food business in South Jersey.

After working for others, Chef Rooks knew he wanted to do his own thing. Support from the Woodbury-based paving block company, EP Henry, made that a reality.

He’s now been in the food business for himself, 16 years in Haddonfield, where he operates Rent-a-Chef, working mostly corporate events and private dinner parties.

Grace, who worked for Rooks as an intern before marrying him, ran My Little Kupcake bakery shop for several years in nearby Collingswood.

But thyroid cancer and young daughters and their schedules led her to close the successful bakery shop.

With the children older and her health stabilized, the couple discussed how to get Grace back in to the food business and develop a second revenue stream.

“I talked to one of my chef friends and he said, ‘Mark, food trucks equal money’” said the chef.

The going price for a finished new food truck is $150,000, but the couple found a used truck, worked with a refurbishing company in Virginia, and created the "Beast" from the ground up for $86,000.

East Coast Custom Coaches even financed the work and holds the note on the truck.

The plan is to take the Beast to corporate events and festivals, showcasing a wider variety of food than many trucks, with changing choices such as crab fries topped with crab and cheese sauce and pulled pork mixed with macaroni and cheese served on panini bread.

The couple found the festival on Facebook and decided its localness made it the place for them to get started.

“We did it for Ridgeway and the little girls,” said Rooks standing next to the Beast. “Maybe they’ll work the truck one day. Maybe it will be theirs someday."