Mascot shares stories about Philly, the Super Bowl and the blessed life inside a sweltering costume 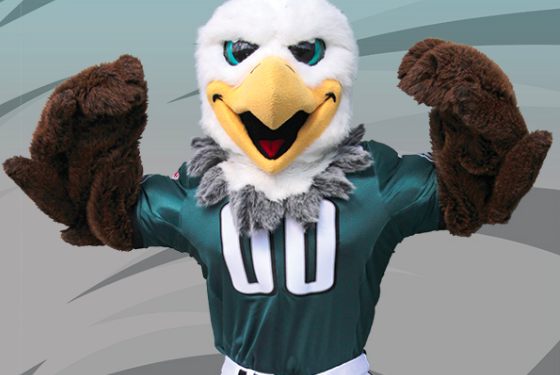 The life of a professional mascot is far more interesting than most of us would ever have imagined. It may be pure fiction that the Eagles' Swoop of "Ace Ventura: Pet Detective" went to blows with Jim Carrey in the mid-nineties, but there's a lot to be said in real life for repping one of the most rabid fan bases in the United States.

That's the subject of the most recent episode of Jamie Arrington's "Arring it Out" podcast. A former mascot himself, Arrington brought in Ryan Hughes, the relatively unknown local legend who manned the helm as Swoop for twelve years.

He's got some great stories. First of all, did anyone know that the University of Delaware boasts an elite professional mascot training program? It's one of the strongest traditions in the country, apparently. Dave Raymond, son of the longstanding head coach at Delaware's football program, became the first ever Phillie Phanatic. The school also produced mascots for the Houston Rockets, Baltimore Ravens, and Washington Capitals and Nationals, in addition to two Swoops.

Hughes, a native of the Baltimore area, got his gig with the Eagles in 1999. Right at the start of the Andy Reid era, his break came largely as a result of the reckless goof committed by his predecessor.

"There was an unfortunate situation where the first Swoop was not paying attention during a game and was driving his four-wheeler, not looking where he was going, and ran into a security guard during the game," Hughes said. "Luckily, she was okay, but as you can imagine, with about 70,000 witnesses, they had to call it quits for him there."

As Arrington points out, getting in trouble is in some ways a rite of passage for the best mascots. Hughes' experience with the Eagles was a bit different.

"At the Eagles, I was more worried about my bosses' bosses," he said. "Every once in a while, I got called into Joe Banner's office. It was like going to the principal's office in high school."

As a mascot-in-training, however, Hughes accidentally "cleaned a guy's clock" at the University of Delaware. A Towson University campus officer who saw him wanted to make an arrest but didn't have the legal teeth to follow through.

Across the board, Hughes paints the Swoop job as a highly desirable position, one with significant engagement responsibilities that required legitimate business savvy. He was constantly hired to do weddings, birthday parties, "Rocky" game promos for the national media, and charity events with the likes of Donovan McNabb, Jevon Kearse and Todd Pinkston.

"It was an honor," Hughes said. "Once you're in in Philadelphia, you are like family. Let's all be honest. It's the bad 10 percent that give the rest of that 90 percent a bad name."

As for Super Bowl XXXIX against the Patriots, Hughes recalls a great time despite the crushing 24-21 loss. Jacksonville, apparently, was sorely unprepared. Food sold out before the game even started. A burst pipe messed up the Eagles introduction, forcing them to walk the circumference of the stadium while Swoop, unaware, ran out of the tunnel by himself. It's there if you dig up the video.

Otherwise, the bright lights of the biggest game brought him the highest form of mascot glory.

"It's exactly what you would imagine. The dream come true."