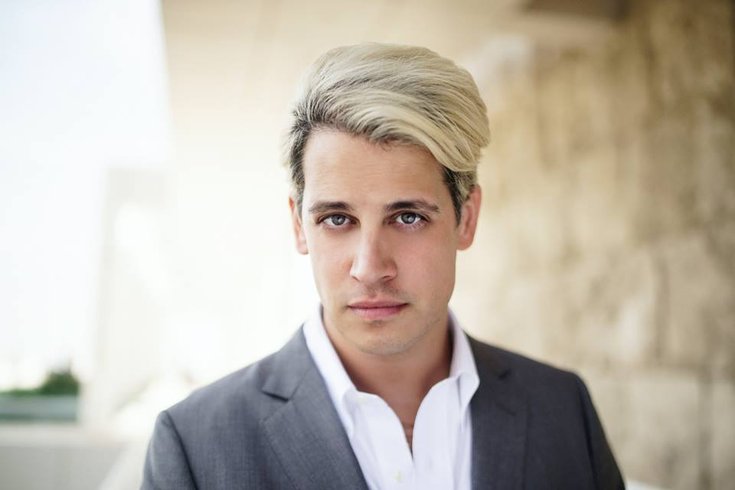 He's been banned from Twitter, and he's been slammed by Democratic presidential nominee Hillary Clinton. And he apparently thought he'd be speaking at Villanova University this fall.

Milo Yiannopoulos, tech editor for conservative news website Breitbart and a leader of the so-called "alt-right" movement, was scheduled to speak at the Radnor Township school on Tuesday, Nov. 15, according to his website.

But Villanova spokesperson Jonathan Gust told PhillyVoice that the event was unsanctioned because the Villanova College Republicans — the organization holding the event — did not follow the process for having a speaker on campus. The protocol includes getting approval from a staff adviser and then the university's Office of Student Life.

But planning around the event hadn't even gotten to that stage by the time the school became aware of it, according to Frank Connor, an executive board member of the Villanova College Republicans. Connor said the group had been in contact with Yiannopoulos' people to possibly speak on campus because he was a "big free speech guy," but never confirmed his appearance.

Students caught wind of the provocative speaker coming to the school because of the listed event on Yiannopoulos' site, as first reported by The Villanovan. Several students expressed outrage over having Yiannopoulos on campus, and it was brought to the attention of the school organization that handles student activities.

Now, the College Republicans have abandoned any plans to bring Yiannopoulos to campus. Connor said the group has a good reputation on campus, something they didn't want to ruin.

Connor didn't know why Yiannopoulos had put the Villanova appearance on his website before confirming it with VCR; the College Republicans hadn't even secured a room yet.

Yiannopoulos did not respond to an email request for comment on this story.

Yiannopoulos has been widely identified as one of the leaders of the "alt-right" movement, a conservative idealogy described by a Los Angeles Times columnist as promoting "white nationalism" that "opposes feminism, diversity, gay rights, globalism, gun control and civil rights."

NPR summarized the movement, which many have attributed to spurring the rise of Republican presidential nominee Donald Trump, as a group of "young white men who see themselves first and foremost as champions of their own demographic."

Yiannopoulos attempted to explain the movement in a long piece for Breitbart, writing that the alt-right is a group that "wants their own communities, populated by their own people, and governed by their own values."

Yiannopoulos, who is gay, has named his series college-speaking events the "Dangerous Faggot" Tour.

Giving speeches with names like "10 Things Milo Hates About Islam," he's caused controversy on college campuses. In May, protesters interrupted his speech at DePaul University in Chicago. The morning of the speech, the phrases "Trump 2016"" and "F*** Mexico" were found painted on campus sidewalks. The university president resigned shortly afterward.

That incident, along with the firestorm of controversy that seems to follow Yiannaopoulos, hashed a ripple effect. The University of Miami canceled an upcoming Yiannaopoulos appearance on its campus due to security concerns.

The Villanovan reported there had been a backlash to news of his scheduled appearance on social media and on campus. Some expressed anger and annoyance on Twitter:

Why in the world is Milo Yiannopoulos coming to Villanova? Last time I checked racism, bigotry, and misogyny weren't in the handbook.

I would just like to say how disappointed I am that the Villanova GOP decided to bring Milo to the university. They are better than that.

One student defended the event. Elliot Slade, a political science student, wrote on Facebook that if people were offended by Yiannaopoulos, they simply shouldn't go.

"It's so strange that we've come to a point where everyone is so overly offended by everything that they need to shut it out of their lives," Slade wrote.