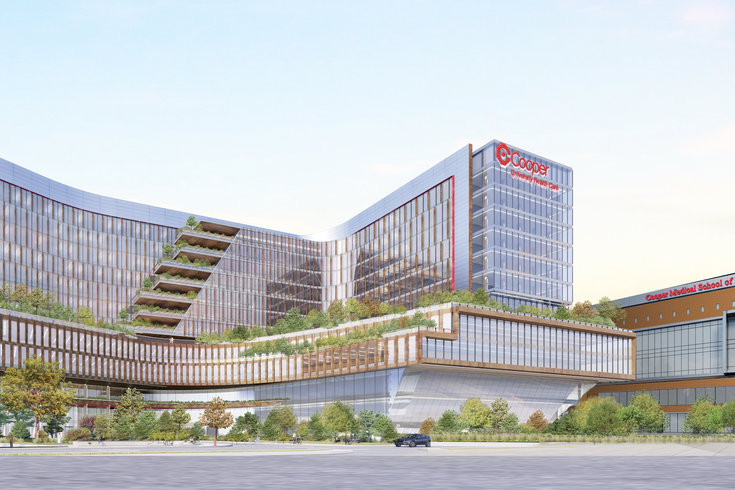 For the first time in more than a decade, Cooper University Health Care will embark on a major expansion to its facilities in Camden. The $2 billion plan features three new clinical towers that will grow the hospital's bed count to 745 in the years ahead, intensifying competition among South Jersey's growing health systems.

The non-profit health system will begin the phased expansion with the construction of a new patient care building at the intersection of Dr. Martin Luther King Boulevard and Haddon Avenue, near the Roberts Pavilion. Work on that building is expected to begin in 2023. Details about the other two facilities, planned over the coming decade, were not specified.

The health system released a panoramic rendering of the long-term vision for its facilities in Camden.

Together, the three new buildings will include more than 100 new private rooms and will expand teaching space for the growing academic medical center. They will also feature emerging technologies for advanced care and support, officials said.

“Cooper's commitment to its home community is a model of how corporate leadership can spark imagination and new opportunities that benefit local residents," said George E. Norcross III, chairman of Cooper University Health Care. "Camden's transformation from being America's poorest and most dangerous city to one on the rise is a national model of what cities can achieve with commitment, faith, and hard work.”

Cooper is currently licensed for 663 beds, handling more than 30,000 inpatient admissions and more than 1.6 million outpatient visits every year. The hospital in Camden is the only level 1 trauma center in South Jersey, with more than 85,000 emergency department visits annually. Cooper also has more than 100 outpatient offices in South Jersey, in addition to the Children’s Regional Hospital at Cooper and three urgent care centers.

Cooper Univeristy Hospital was founded in 1887 by prominent Quaker phsyician Richard M. Cooper, whose original mission was to serve low-income residents in Camden.

Cooper University Health Care last expanded in 2008 with the opening of the $220 million Roberts Pavilion, a significant step in the turnaround of a health system that was on the brink of bankruptcy at the turn of the century. It later opened Cooper Medical School of Rowan University in 2012 and the MD Anderson Cooper Cancer Center the following year.

Today, Cooper is the largest private employer in Camden County with more than 8,900 employees. Its physicians and providers encompass more than 75 specialties.

“Camden has seen a dramatic transformation in recent years as many state and local partners have worked together to improve the city, and Cooper has played an integral role in those efforts,” Murphy said Monday. “By supporting public safety, educational opportunities, and job creation in addition to providing quality medical care, Cooper has taken a holistic and meaningful approach to strengthening the health of the community it serves. I applaud this new expansion and Cooper’s ongoing work to improve the lives of Camden residents.”

Cooper's move to expand in South Jersey comes after other health systems in the region have taken similar steps over the past decade.

In 2017, Jefferson Health acquired Kennedy Health's three hospitals and undertook expansions on each of them in recent years. Virtua Health expanded with Camden's Our Lady of Lourdes Medical Center in 2019 and has plans to open a proton therapy center in Voorhees in partnership with the University of Pennsylvania. Inspira also opened a new medical center in Mullica Hill in 2019 and is acquiring Salem Medical Center.

“This expansion will give our dedicated professionals the resources, innovation, and flexibility to continue to serve, heal, and educate our community and allow us to further recruit top-notch talent,” said Dr. Anthony J. Mazzarelli, co-CEO of Cooper.

Disclosure: George E. Norcross III, is the chairman of the Board of Trustees of The Cooper Health System. He is the father of PhillyVoice Founder and Chairwoman Lexie Norcross.