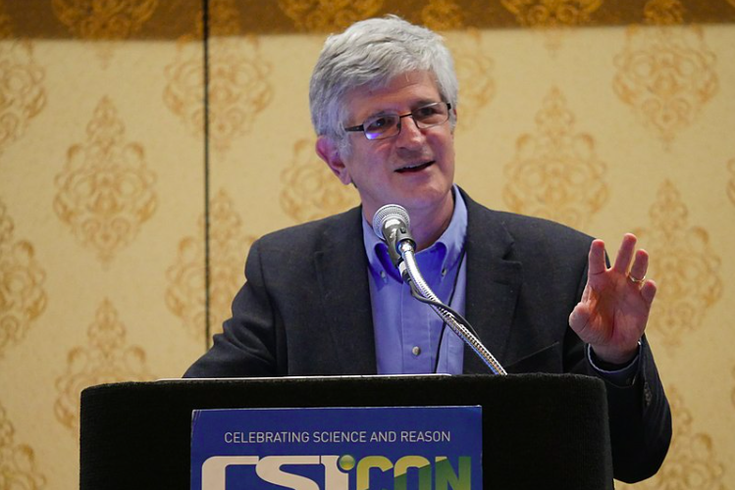 Dr. Paul Offit, a Philadelphia-based expert in infectious diseases and immunology, says his faith in the Philadelphia Eagles translates to his optimism in the fight against a coronavirus pandemic. Offit appears here at the 2018 CSICon in Las Vegas organized by the Committee for Skeptical Inquiry.

As health officials worldwide grapple with the potential spread of a novel coronavirus, one local researcher told CNN he draws his optimism about containment from being a Philadelphia Eagles fan.

Dr. Paul Offit, director of the Vaccine Education Center at the Children's Hospital of Philadelphia, told CNN that some particularly contagious viruses, like measles, can spread easily to people located across the room from an infected person. But others require much closer contact to transmit.

Offit, who also is a pediatric infectious disease specialist at Penn's Perelman School of Medicine and an advisor to the U.S. Centers for Disease Control and Prevention, then referenced the Eagles as a source of calm, as one Reddit user pointed out.

Eagles Fan Optimism and the Wuhan Virus from r/eagles

After a Super Bowl victory and two straight 9-7 seasons that required heroism to sneak into the playoffs, Offit has a point. It was a curious thing to slip into an interview about coronavirus, but it just goes to show how much life in Philadelphia revolves around the Eagles.

By Monday morning, the respiratory illness had been confirmed in five people in the United States. Philadelphia health officials are currently investigating whether a William Penn Charter exchange student may be infected.

In China, where the novel coronavirus originated, 80 people have died and more than 2,700 cases have been confirmed. All of the cases in the U.S. have involved individuals who traveled to Wuhan city, where the virus was traced to a seafood market.

In an alarming development, Chinese officials claimed Sunday that the virus can be spread before people become symptomatic. If those who are infected can't be quarantined early on, the coronavirus potentially could be a far more dangerous contagion than initially thought.

The CDC isn't yet convinced that transmission of the virus can occur before the presence of symptoms, according to CNN.

U.S. health officials believe there is a two-week incubation period for the virus, with a low probability of transmission during that time. Though they're questioning whether Chinese researchers have enough data to support their contention, U.S. officials are still treating coronavirus as a potential pandemic.

The CDC is hoping China will soon invite U.S. health officials into the country to further investigate the risk of transmission. The National Institutes of Health, meanwhile, is already collaborating with researchers worldwide on the development of a vaccine.

While the CDC continues to treat coronavirus as a serious threat, health officials urged moderation of panic in a statement on Sunday.

"Outbreaks of new diseases are always of concern – and in today's connected world, an outbreak anywhere can be a risk everywhere," the CDC said. "Risk is dependent on exposure."