Could the next Wing Bowl also be the last? 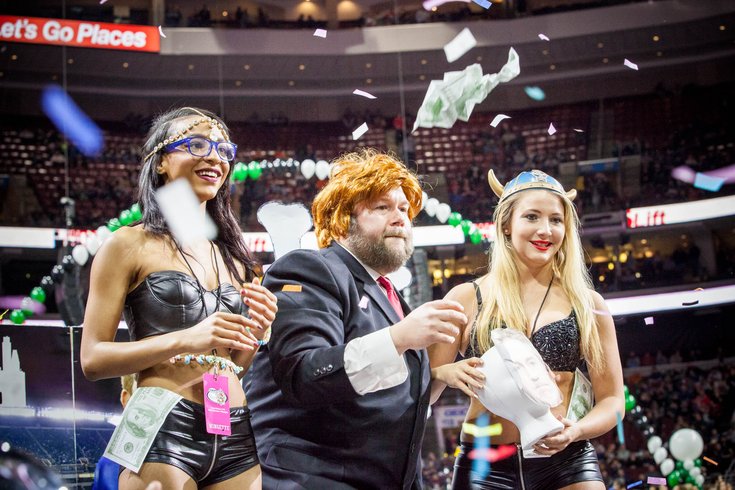 UPDATE [Wednesday, 9:55 a.m.] - Apparently, the reports of Cataldi's demise were premature. According to him, his retirement is very much up in the air.

"My date of my retirement has become a running joke because I’ve been so wishy-washy about it for at least the last six years," Cataldi said in an email. "I guess it depends on what day you ask me. I have every intention to complete my contract through the  end of 2017, and then we’ll see.

"Right now, it looks like a reasonable end point, but I have to take into consideration WIP’s needs and wants. It’s the only station I have ever worked at, and I want that decision to be in WIP’s best interests, too."

I really have no idea [if he'll actually retire]," co-host Al Morganti said in an email. "But I am afraid, if he retires, that he would drive around Philadelphia with a megaphone every time there was a sports issue. But he wouldn't start driving until 6:30 a.m. On the other hand he might not retire until the Eagles win  a Super Bowl."

And as for Wing Bowl?

"Twenty-five is 24 more than I figured," Morganti added.

That being said, it appears there's no need for you to panic (or celebrate, depending on how you feel about the annual gluttony fest). It's not going anywhere, regardless of what Cataldi decides.

"Wing Bowl will be here long after both Al and I are gone," Cataldi said. "We have absolutely no say on the future of the event. It is owned by WIP (and CBS) and they have total control over what happens to it. If we had our way, would the next one — the 25th — be the last? Maybe. But since we don’t have that power, everyone can calm down.

"Wing Bowl isn’t going anywhere unless WIP says it is."

Love him or hate him, Angelo Cataldi has been a staple in Philadelphia for as long as many of his younger listeners have been alive. He's been on the air for over a quarter of a century, but according to a recent interview with Philadelphia Magazine's Victor Fiorillo, next year may be his last at SportsRadio 94 WIP.

With his contract at the station up at the end of the year, the 65-year-old is seriously considering retiring when it expires.

"I think that will be the end of the run," he told PhillyMag. "I will walk away really happy."

Catladi also added his doctor told him he should have quit 10 years ago and that while the money is great, the "worst thing is getting up at two every morning. That grinds on you after 26 years."

If this isn't just a bluff -- philly.com's Jonathan Tannenwald has pointed out that he's said similar things towards the end of previous contracts -- it remains to be seen what this means for Al Morganti, Rhea Hughes and the rest of the WIP Morning Team.

Cataldi and Morganti are PhillyVoice contributors.

If Cataldi goes, would he take Wing Bowl into retirement with him?

In the interview, the morning host said that the people who think Wing Bowl is trash "have a point."

"Even we have grave misgivings about it," he added. "What it is now wasn’t the plan that we designed 24 years ago."

Now, it's become less about devouring chicken wings and more about exposing human breasts. Back then, it was just a couple of guys in a hotel lobby trying to eat more than the other.

As it turns out, this may be a perfect time bring Wing Bowl to an end. In 2017, it will turn 25. Coincidentally, that's also the age when you're officially too old to attend Wing Bowl.

Emails to Cataldi and Morganti seeking comment were not immediately returned. We'll have an update once we hear back.