John Zurlo once helped the NIAID head with HIV/AIDS research. Now, he's an invaluable cog in the local pandemic response 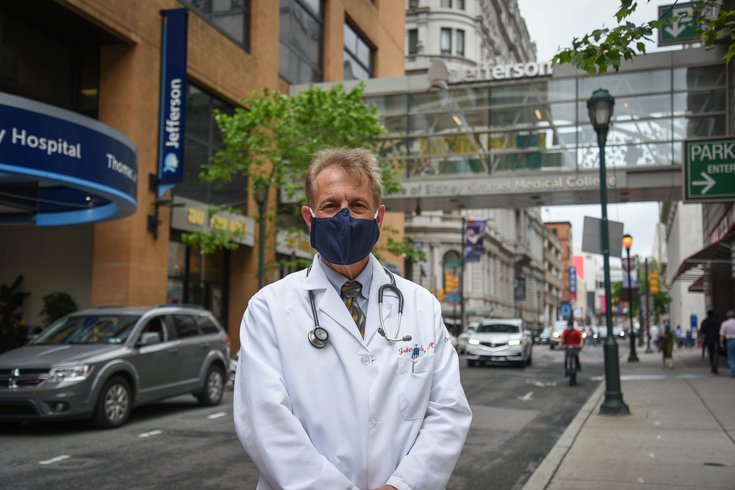 At the height of the COVID-19 crisis, Dr. John Zurlo would join a Zoom call every morning with about 150 Jefferson Health physicians, department chairs, service line leaders and quality and safety experts.

As the chief of Jefferson's infectious disease division, it's Zurlo's responsibility to update the health system's leadership on the latest COVID-19 research, policy changes and system response.

That's the required portion of his job. But Zurlo also views his now occasional briefings – since dubbed "The Zurlo Report" – as an opportunity to provide hope to a health system that has treated more COVID-19 patients than any other in the Philadelphia region.

"I really feel the world's single-minded intention is focused on solving this," Zurlo said late last month. "To think we're going to be in the same position (as) we were in March in October, November (or) December, without any advances, without any improvements, is foolish. I think there are a lot of ways we're already moving ahead with COVID."

Zurlo is an optimist. He's quick to point out that the medical community has confronted emerging pathogens in the past, though he also notes this coronavirus is unique. But he's confident that scientists will identify a vaccine and that, in the meantime, incremental advancements will propel the nation forward.

"It's my job, I think, at least in part, to provide that kind of guidance," Zurlo said. "Not trying to be a Pollyanna, but presenting an approach and a future that is more realistic than just total negativity. I really feel that's an important part of my job and I think people enjoy hearing these things and my perspective on the data."

In many ways, Zurlo is Jefferson Health's version of Dr. Anthony Fauci, the nation's leading infectious diseases expert who quickly became a calming presence – and a household name – as the country searched for answers amid the coronavirus pandemic.

It just so happens that Zurlo spent several years training under Fauci at the National Institutes of Health in the late 1980s.

Zurlo began his residency at the National Institute of Allergy and Infectious Diseases in the midst of the HIV/AIDS crisis.

At the time, doctors were still searching for an effective treatment. There were lots of questions – and fears – about how the virus was transmitted. Just a few years earlier, when Zurlo saw his first AIDS patient, he had worn full protective garb.

As a trainee, Zurlo had the opportunity to help Fauci conduct clinical trials for various HIV therapies.

He came away impressed by Fauci's work ethic, grounded nature and selflessness. Fauci, already the head of NIAID, was still conducting inpatient rounds at least once a week.

"I have not met anybody in my entire career who I've seen work harder than Tony Fauci," Zurlo said. "He was there – always. He's been in that position since (1984), just always working, yet always taking care of himself. Back in that day, he'd go out running at mid-day almost every day."

In time, Zurlo and Fauci realized they each had graduated from Regis High School, a small Catholic boys school on the Upper East Side of Manhattan. At the end of Zurlo's first training year, Fauci pulled Zurlo aside during an annual pool party at his house.

"He was anxious to bring me up to his office and he showed me his yearbook from our high school, where – I think he's 5-foot-5 or 5-foot-6 – he was the captain of the basketball team," Zurlo said. "It was kind of a high point for him."

The two have remained friendly over the years, bumping into one another at conferences. After his residency ended, Zurlo headed to Penn State Hershey Medical Center, where he spent 28 years, before accepting his current role at Jefferson in July 2018.

Fauci, of course, continued at NIAID, forgoing what Zurlo said could have been a lucrative career in the private sector. His commitment and selflessness epitomize the ideals stressed at Regis High, Zurlo added.

"When ebola came around, they admitted several patients to the clinical center in D.C.," Zurlo said. "He donned and doffed personal protective equipment to see these patients. That's crazy. He didn't have to do that. He's the head of an institute."

Now, he's become the face of America's response to the coronavirus, standing alongside White House officials at press conferences and, at times, correcting the misinformation they put forth.

"If anybody is ready for this, or is the right person at the right time in history, it is Tony Fauci," Zurlo said. "This is what he's successfully dealt with over many years in his public service. I'm not surprised to see Tony at the head of this, and right in the center of it, because that's where he belongs.

"To decline his advice, you do it at your own risk, and the risk of the country, is my take."

In some ways, the coronavirus pandemic reminds Zurlo of the early days of the HIV/AIDS crisis. There are many differences between the two deadly viruses, but there are parallels in the uncertainty they sparked.

"Just remembering all of that, and going through that, in many ways it's the same," Zurlo said. "This is a virus that leaped from animals to humans in a different way than COVID did, but it's one of the many emerging infections that we've seen develop over my career." 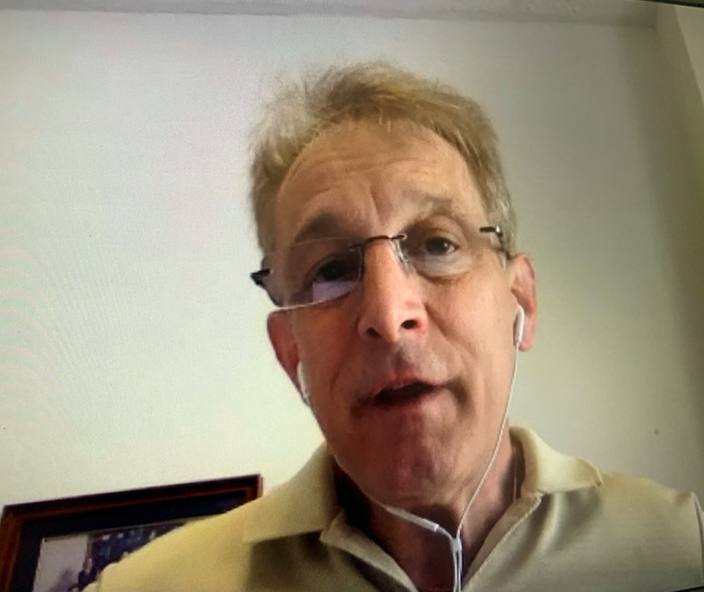 Finding hope in a pandemic

Last September, Zurlo gave a lecture on emerging diseases to Jefferson University's medical students. He ran through the various pathogens that had emerged during his career – HIV, SARS, MERS and ebola.

"My concluding slide was 'infections will continue to emerge,'" Zurlo said. "I said, 'The only predictable thing about it is its unpredictability."

Four months later, Zurlo was back in front of the same student group. The novel coronavirus had just been identified in China. It hadn't even been given a formal name, but in all likelihood it already was spreading around the world.

Within a couple months, Philadelphia was on lockdown, COVID-19 cases had mounted, and Zurlo's typical duties as division chief had been upended, at least temporarily.

In early March, he was tasked with being the infectious diseases expert on Jefferson's COVID-19 task force. Within a week, the task force had evolved to an incident command team with Zurlo serving as the COVID-19 expert for the 14-hospital enterprise.

"Did I want to do this? I don't know," Zurlo said, somewhat philosophically. "Does anyone really want to do something like this? It pulled away from everything we're doing. But the reality is we had to deal with it, and we still have to deal with it. That's my job and that's become my job."

So Zurlo spends much of his time steering decisions on everything from COVID-19 treatment guidelines to personal protective equipment. He keeps a close eye on the latest medical literature – a process he says is "like drinking from a fire hose." He hops on Zoom call after Zoom call and occasionally participates in Jefferson's town hall meetings, addressing hundreds of employees.

And though much of his work is administrative, he continues to treat patients, including those battling COVID-19.

Through it all, Zurlo has sought to maintain a hopeful outlook. It's one that has been, well, infectious.

"From the very beginning, that had a positive impact on everyone," Devine said. "We didn't know where this was going. There was so much concern and anxiety about this, especially among our staff. When he spoke to leadership about the things that were going on, and he could transcend that message, it created a lot more confidence in our organization."

Zurlo couples expertise with a humble nature and a willingness to reconsider his positions based on the latest medical data – and that's made him a vital leader, Devine said.

"He's so well-read on the topics and so connected that he's able to decipher things that work and don't work," Devine said.

That knowledge begs the questions that so many people want to know: Will the coronavirus surge in the fall? How soon will we have a vaccine? And, of course, when will life begin to feel normal again?

From Zurlo's perspective, the path forward includes widespread masking and and a lot of hand-washing. Nursing homes and vulnerable populations must be protected. Some level of social distancing must continue as the economy reopens.

Doing so will take a collective buy-in, he said.

Yet, he fears that the country's political chasms are chipping away at this. To him, masks seem "a small price to pay" to regain a level of normalcy. But he recognizes the decision to go maskless has become a political statement for some people who view the pandemic response as overblown.

As the medical community searches for a vaccine, Zurlo stressed that it's also necessary to identify treatments that can be taken immediately after someone tests positive for COVID-19.

Zurlo envisions a drug similar to Tamiflu, the oral medication given to influenza patients. Such a drug particularly would benefit the people most at risk of developing severe COVID-19 complications. It would reduce hospitalizations and ultimately save lives.

COVID-19 is not going away anytime soon, Zurlo said. But in time, all those strategies will gradually bring life closer to normal.

"I really am (optimistic) that we'll eventually get out of this and move on back to something, well I hope, pretty close to normal," Zurlo said. "I'd love to see a normally functioning Philadelphia. I think we all would."