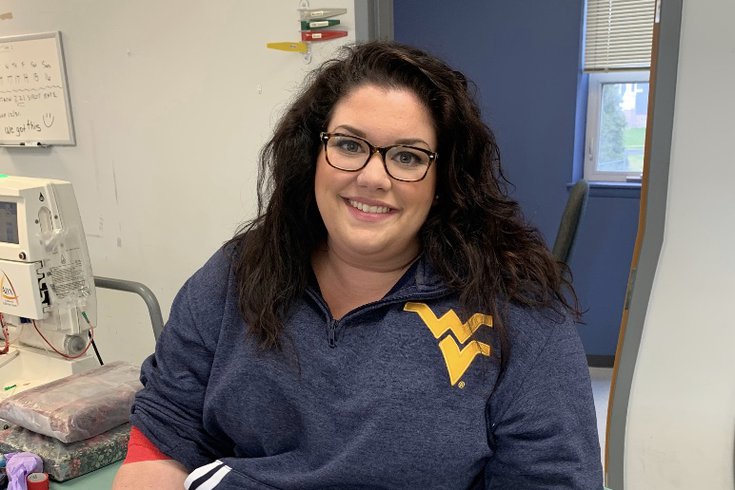 Marisa Leuzzi, of Downingtown, Pennsylvania, donates her plasma donation after recovering from the coronavirus. Two Virtua patients who received a transfusion of her plasma, including her aunt, are rebounding from severe COVID-19 cases.

Both patients were removed from ventilators within two weeks of receiving their transfusions. They later were discharged from the intensive care unit and transferred to the general medical floor. Now, they both are on track to return home to their families in May.

Convalescent plasma therapy has been around for more than 100 years and can be an important line of defense against diseases that don't have a vaccine. The therapy involves plasmapheresis, a process in which a donor's plasma is separated from the blood cells so that it can be transfused into a sick patient, providing them the antibodies needed to fight a particular infection.

"We must remember that while convalescent plasma has helped these two patients, it is not guaranteed to help all people," Virtua Dr. Lukasz Polisiakiewicz said. "More studies are needed, and it is premature to speculate on the ultimate role this treatment option will play. What I do know for certain is that it was a great honor for me to provide these two families with good news and a second chance."

Bannister had been on a ventilator for three weeks when she received a convalescent plasma transfusion from her niece, Marisa Leuzzi, of Downington, Pennsylvania, who had recovered from COVID-19.

Polisiakiewicz coordinated the donation and transfusion process with the American Red Cross. The plasma donation also was used to treat Fei.

Bannister was admitted to the hospital on March 22 with severe respiratory symptoms and placed on a ventilator two days later. Five days after the transfusion, her vital signs had returned to normal and by the 11th day, providers were able to take her off the ventilator.

She is now alert and able to video-chat with her family. She will most likely spend time at a rehabilitation center before going home.

Fei, a professional opera singer from Mount Laurel, had been on a ventilator for six days before his April 5th transfusion. He was removed from the ventilator nine days later. While his recovery has been gradual, his family is hopeful.

"Each day when we spoke to the nurses and doctors, we heard tiny indications that his condition was improving," his son Patrick said. "Sometimes we could even hear Luciano Pavarotti [recordings] in the background, which we had asked them to play for him. Pavarotti is dad's favorite.

"We can't wait to hear him sing again someday. Frankly, just to have a meal together as a family is going to be an amazing experience."

Virtua is a member of the FDA-authorized Convalescent Plasma Expanded Access Program, a national coalition of health care organizations and industry partners led by the Mayo Clinic.

"We are incredibly excited about these remarkable recoveries," Virtua Health Medical Director Eric Sztejman said. "We performed the transfusions just days after the clinical trial was announced, so it is gratifying to be among the first in nation to explore this promising approach to combating the coronavirus."

There isn't a vaccine or treatment approved for COVID-19, but clinical trials are underway to evaluate the safety and efficacy of using convalescent plasma.

The American Red Cross is asking people who have fully recovered from COVID-19 and meet additional criteria to donate plasma for clinical trials of the plasma therapy.