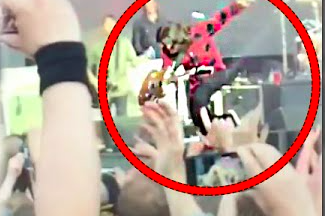 Dave Grohl takes a dive off the stage while performing the Foo Fighters' "Monkey Wrench" in Gothenberg, Sweden, on June 12, 2015

Gutsy performances deserve all the applause they're given. Usually, it happens when athletes play through injuries. Take LeBron James against the Warriors in Game 4 of the NBA Finals on Thursday night. A gash in his head was glued shut so he could keep playing, and yes, the Cavs lost, by a lot, but it's still admirable.

Musicians should get their due credit for performing through mishaps on stage, too. On Friday night, two songs into a concert in Gothenburg, Sweden, Foo Fighters' singer and guitarist Dave Grohl fell off the stage and fractured his leg.

As you can see, it's pretty gnarly.

Thank you Gothenburg. That was amazing. pic.twitter.com/BXvuxIfVEv

Many others would probably have called it a night right then and there, but Grohl's appreciation for fans and fascination with heroism prevented him from walking away.

It's not always the case. In 2008, a drunk fan at an Oasis concert in Toronto infamously jumped on stage and shoved Noel Gallagher (right around 1:30 mark), breaking three of his ribs. That show did not go on, though to be fair, singing with broken ribs just isn't going to happen.

Athletes are usually contending with opponents, unless they're Ron Artest, but for musicians, all kinds of mad concertgoers can strike when security is lax enough. In October of 1978, Aerosmith was in for a rude surprise in Philadelphia after a supposed fan chucked an M-80 onstage just before the encore, reportedly burning Stephen Tyler's cornea and rupturing an artery in guitarist Joe Perry's hand.
In November of the following year, Aerosmith returned to Philly and a fan threw a beer bottle from the balcony, sending shards of glass into Tyler's face. He wanted to keep playing, but but the rest of the band voted against it.

The Foo Fighters have canceled two shows in Europe as a result of Grohl's injury, according to the Hollywood Reporter. Even so, Grohl's decision to take the injury in stride and return to the stage speaks volumes to his commitment as a musician.

With that in mind, here's a video counting down the top 10 concert tragedies and mishaps.