Day 3 NFL Combine preview: Edge rushers to watch who could interest the Eagles 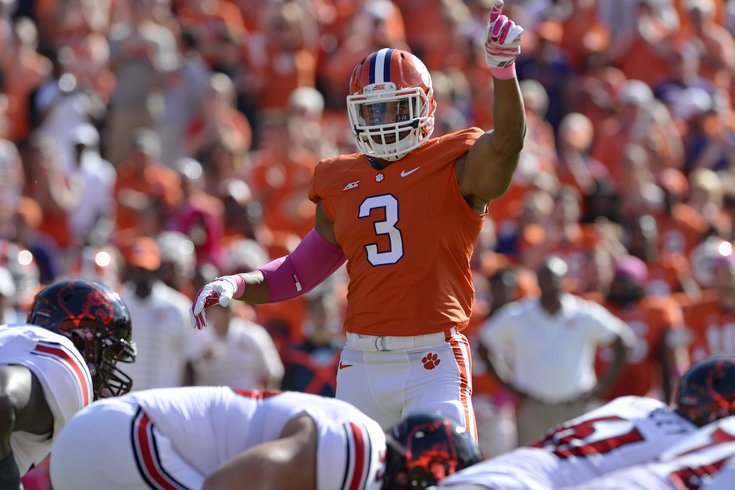 Vic Beasley is one of many edge rushers who could be drafted in the first round this year.

INDIANAPOLIS -- After two days of watching players on offense work out, it's the defense's turn. Here we'll look at a position of interest to Eagles, depending on how free agency shakes out for Brandon Graham and Trent Cole. The good news for the Eagles is that talented edge rushers are plentiful in this year's draft. In case you missed any of our offensive previews, you can find them at the bottom of this post:

• Vic Beasley, Edge rusher, Clemson (6'3, 246): Beasley is a pure speed rusher with the most sacks in Clemson history, and could be an immediate impact player in a pass rushing role. He has an outside shot of falling to the Eagles at 20 if other teams are scared off by his size.

• Bud Dupree, Edge rusher, Kentucky (6'4, 269): Dupree is considered a high character guy with excellent athleticism and hustle. He also has experience as a stand up edge rusher, which makes his projection to a 3-4 scheme much easier. Obvious potential Eagles target.

• Randy Gregory, Edge rusher, Nebraska (6'5, 235): Very thin, but an athletic freak. He was compared to Dion Jordan, in a bad way, but he'll be off the board early in the first round.

From Zierlein's scouting report: Exceptional personal and football character with a desire to learn his new position. ... His desire and character combined with his superb physical traits could make him a late-round project who teams show patience with as he gets bigger and continues to learn the position.

Sources Tell Us: "This guy is going to blow some people away with his explosion numbers and teams will love him in interviews because he's a genuinely good guy. As a player, he still needs a lot of time to develop and you better set aside time for that and have a plan for him." -- NFC South area scout.

At 6'5, Gwacham has the length the Eagles crave at OLB.

• Eli Harold, Edge rusher, Virginia (6'3, 247): If you stop Harold's initial pass rush move, that's it. He's done on that play. But, you can see his raw speed and athleticism here.

Kikaha makes all kinds of sense for the Eagles, for the following reasons:

- To begin, he's a highly productive edge rusher who can get to the QB. In 2013, Kikaha had 13 sacks (9 in the last 5 games), 3 forced fumbles, and 15.5 tackles for loss. In 2014, he had 19 sacks and 25 tackles for loss. Here's Washington's bowl game against BYU last year. Kikaha basically ruins BYU's offense, as he beat their LT like a rented mule all day. Watch his violent hands and quickness.

- He is considered a "high character" guy with outstanding work ethic. #Culture.

- Obviously, at 6'2, 253, Kikaha doesn't have the size to play 3-4 DE regularly in the pros, but I believe he can fill in there a pinch. Look at where Washington has him lined up in a goal line situation. He holds up at the point of attack far better than his size would suggest.

But there is one huge negative -- Kikaha has torn the ACL in the same knee twice. This is an obvious player that Eagles would check out medically before they'd ever draft him, but if he stays healthy this season and his knee checks out in evaluations, Kikaha could be an attractive option for the Eagles at the right spot in the draft.

The other negative would of course be his size, at 6'2. Kikaha also did not stand out at the Senior Bowl.

From Zierlein's scouting report: Confident and tough with high football character. Gives second effort and doesn't quit on plays. ... Known for strong mental makeup, Mauldin is expected to check all of the character boxes, according to scouts.

Sources Tell Us: "He overcame a tough childhood and developed a mindset that nothing is going to stop him. He works his butt off and he wants to be great. I'm cheering hard for this kid and I'll bang the table for him when the time is right." -- NFC North scout

• Nate Orchard, Edge rusher, Utah (6'3, 250): Orchard had major production his senior senior, with 18.5 sacks and 21 tackles for loss. He was also unblockable at times during the week of Senior Bowl practices. However, when he got opportunities to drop into coverage, it wasn't pretty. If the Eagles think they can make him into a player who can be functional as a complete OLB, Orchard could get a look, but he'll probably be valued more highly by 4-3 teams.

• Lynden Trail, Edge rusher, Norfolk State (6'7, 269): Loooong, athletic guy with minimal experience playing OLB at a small school, which makes him raw. Trail also got some reps at the Senior Bowl as a tight end. Late round developmental prospect.

• Tony Washington, Edge rusher, Oregon (6'4, 247): Washington was the Eagles' fifth round pick in my first mock draft of the offseason:

Washington is a versatile linebacker who could serve as quality depth at OLB behind Connor Barwin at the "Jack" position, but also fill in at ILB in a pinch. In his last two seasons at Oregon, Washington had 13.5 sacks and a very impressive 7 forced fumbles. He actually reminds me a little of a less athletic Marcus Smith but with a nastier demeanor. The difference is you can probably get Washington in the 5th round instead of, you know, at 26th overall.