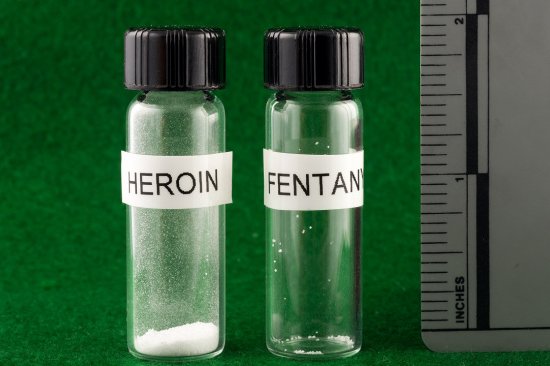 This photo, released last fall by the New Hampshire State Police Forensic Laboratory, shows the amount of heroin needed to match the potency of a smaller batch of fentanyl

As Pennsylvania battles a complex and evolving drug epidemic, sobering new statistics from the Drug Enforcement Administration (DEA) show the state saw a frightening 37 percent increase in drug overdose deaths from 2015 to 2016.

The annual joint intelligence report, compiled with data from coroners and medical examiners across all of Pennsylvania's 67 counties, provides analysis of how patterns of drug use reflect changes in local markets.

Statewide, a total of 4,642 drug-related overdose deaths were reported by coroners and medical examiners in 2016, a rate of approximately 13 deaths per day. 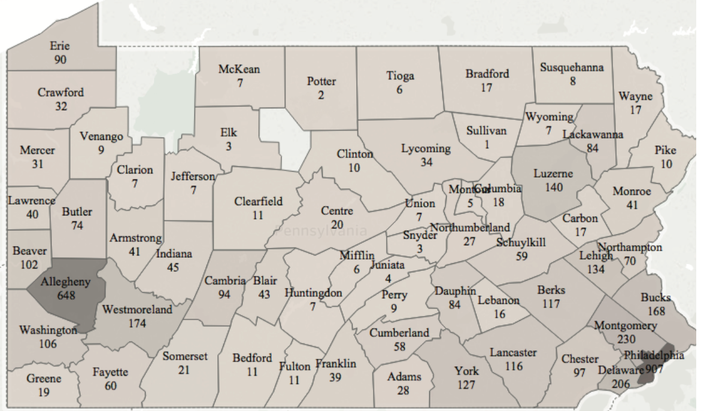 Among the report's most alarming findings was a dramatic increase in the number of fatal overdoses involving fentanyl, an extremely potent opioid often mixed together with heroin. Fentanyl was present in 2,294 toxicology reports, or about 52 percent of all cases, while Fentanyl-Related Substances (FRS) and Non-Prescription Synthetic Opioids (NPSOs) pushed the total in this drug category up to 2,395 deaths.

While the data shows a marked shift from heroin to fentanyl deaths in late 2016, particularly in western Pennsylvania counties, the report notes that a trend cannot necessarily be confirmed by overdose statistics alone. Even so, the surge in popularity of fentanyl is not an aberration — only 27 percent of 2015 overdoses were attributed to the substance — and drug dealers appear to be meeting a demand.

"Because fentanyl is so potent, it can cause a much higher rate of overdose death than heroin, despite lower user rates," the report authors wrote. "Additional indicators reported by law enforcement indicate that users are now seeking out fentanyl instead of unknowingly purchasing fentanyl disguised as heroin, and street-level traffickers are openly marketing fentanyl to customers instead of disguising it as heroin."

Philadelphia, despite dropping from first to fifth in this year's county overdose rankings, has been hard hit by fentanyl and related substances, as shown in the chart below. 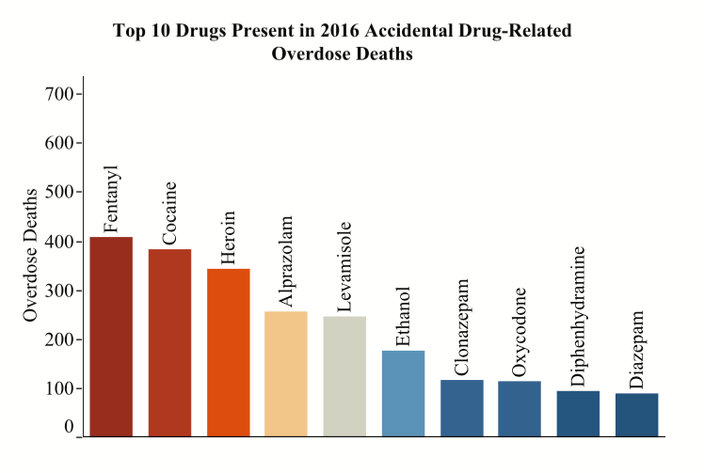 Overdose numbers in counties across the region all saw increases despite some improvements in state rankings based on deaths per 100,000 people.

This year's report comes after a 23.4 percent increase in Pennsylvania overdose deaths was recorded between 2014 and 2015. The 2016 report was prepared in conjunction with the University of Pittsburgh’s School of Pharmacy Program Evaluation Research Unit (PERU) and Technical Assistance Center, which seek to provide context and analysis to public health data.

“Looking at overdose data from counties across the state, we see the devastating effects opioids have on the people of Pennsylvania. Through PERU’s partnerships with the DEA and other community organizations, we are working to do more than analyze numbers,” PERU Director Dr. Janice L. Pringle said. “We strive to provide counties with accurate information and tangible resources that can be implemented to prevent this epidemic from progressing any further.”