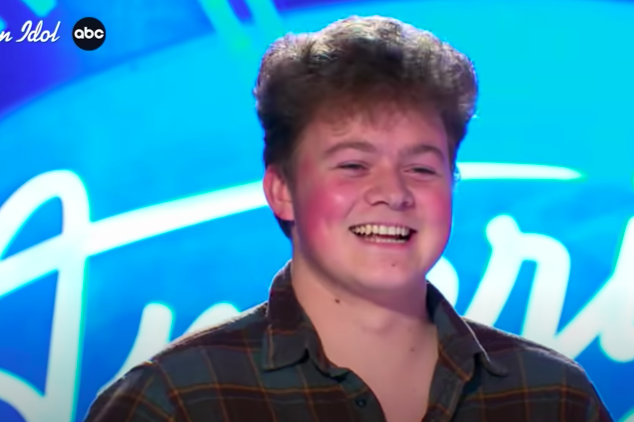 Delaware County native Luke Taylor auditioned for American Idol on Sunday, performing Johnny Cash hit "Ring of Fire" and "Frosty the Snowman," before leaving with a ticket to Hollywood.

A local talent out of Thornton, Delaware County, will be heading to Hollywood after appearing on American Idol.

Luke Taylor, a 20-year-old singer and student at Liberty University in Lynchburg, Virginia, sang two songs during his audition on Sunday's episode of the ABC singing competition.

Taylor, who currently has 2.1 million followers on TikTok, rose to social media fame during the early months of 2021 during the app's "sea shanty" craze. Taylor would add a bass note to other users' shanties, in a form called "dueting." He later formed a sea shanty group with other TikTok users called "The Anchor Men," and considered taking the act on the road post-pandemic.

In January 2021, Taylor and a group of TikTok artists formed "The Wellermen," and posted a full length version of the viral song on YouTube.

After gaining recognition on the video sharing app, Taylor was featured in a 6abc segment and was later asked by representatives from American Idol if he would be interested in auditioning.

"My real musical inspiration is my dad," Taylor told 6abc. "He's the one who really pushes me to work hard on my music and keeps me loving it more and more everyday."

He began his audition by joking around with country singer and judge Luke Bryan, using his deep voice to try his hand at an impromptu movie trailer narration. Each of the three judges were shocked by the depth in his voice, and sat intently as Taylor began to sing "Ring of Fire" by Johnny Cash.

Halfway through his audition, Bryan stopped Taylor and asked him to sing "Frosty the Snowman." Taylor responded by saying he doesn't know the song off of the top of his head.

"You're the next (is it) Burl Ives," Bryan says, pulling the song up on his phone and bringing it to Taylor. "Well listen son, you're going to Hollywood, I don't care if I have to cut an arm off."

After his rendition of the holiday classic, the judges began their deliberations, offering Taylor advice and feedback on the strength of his voice and room for improvements. Only one of the judges, Katy Perry, warned Taylor that he will need to improve his range, rather than focusing in on the "gimmick" of his unusually deep singing voice.

Even with one "no" vote, Taylor received his "golden ticket" to the next round of the competition. Taylor's full audition is below.

In the meantime, Taylor is still active on his popular TikTok account, most recently performing a rendition of "The Misty Mountains Cold" from "The Hobbit," which currently sits at more than 155,000 likes on the video platform.