“Disrupt (the shooter’s) process,” a police officer advised. “If you have something in your hand, throw it at him." 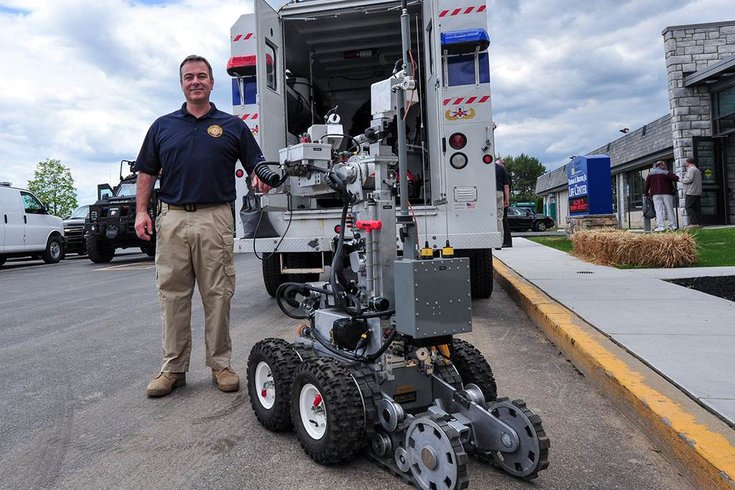 Sgt. William Gordon, a detective with the Delaware County Criminal Investigation Division, stands outside of Neumann University with a bomb sweep machine and its transportation vehicle during a forum on public safety on Thursday, May 19, 2016.

When Sylvia Seegrist opened fire at the Springfield Mall in Delaware County on the day before Halloween in 1985, the township had just completed its first disaster plan.

The township had scheduled a drill to put the plan through its paces. Two days before that drill, Seegrist, who had a history of mental illness, exited her car at the mall on Baltimore Pike with a Ruger semi-automatic long rifle and started shooting. Before it was over – an EMT/firefighter who was shopping in the mall managed to disarm Seegrist – three were dead and seven were wounded.

“It actually played out very, very quickly,” Pietrafitta said. “We had two-way communication and the original dispatch was there was one shooter, and then there were two shooters with BB guns, which wasn’t true. There was only one shooter. 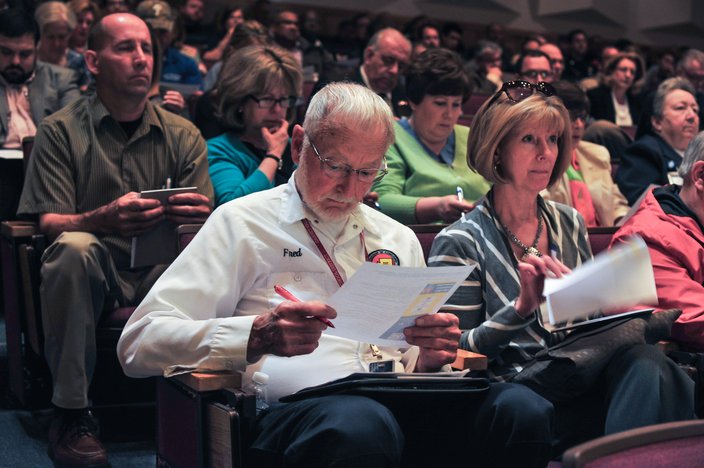 Fred Field, fire marshal and emergency management coordinator in Concord Township, reads the agenda before the Planning and Preparing for an Active Shooter forum begins at Neumann University.

"(The response) played out kind of well," he recalled. "It was resolved fairly quickly. Jack Laufer, an EMT and firefighter, just happened to be in the Springfield Mall shopping and he stopped her and held her down until police came. He was the hero of the day.”

“You need to be aware at any moment that something could happen. You have to have a plan. Visualize what you would do .... Run, hide and fight are the options you need to decide.” – Tim Boyce, Delaware County District Attorney's Office

“It was a pretty good program for the target audience,” said Pietrafitta, who studies incidents to see how they are handled. “I learned some new techniques.”

Rich Cordivari, vice president of national operations support for AlliedBarton, a security company, recommended preparing for workplace violence by putting a plan in place and conducting drills before an incident.

“The definition of an active shooter is an individual killing or trying to shoot you in a confined space,” Cordivari said. “It’s a big topic.”

"Everyone should have situational awareness, recognition that a threat exists and training readiness," he said. “Awareness training can include effective communication. And review and regularly update your plan.”

Three panelists – Tim Boyce, preparedness coordinator with the district attorney’s office, Radnor police Lt. Christopher Flanagan and Haverford police Officer Brian Coleman – challenged the nearly 300 attendees on what they would do if a gunman suddenly entered the auditorium. 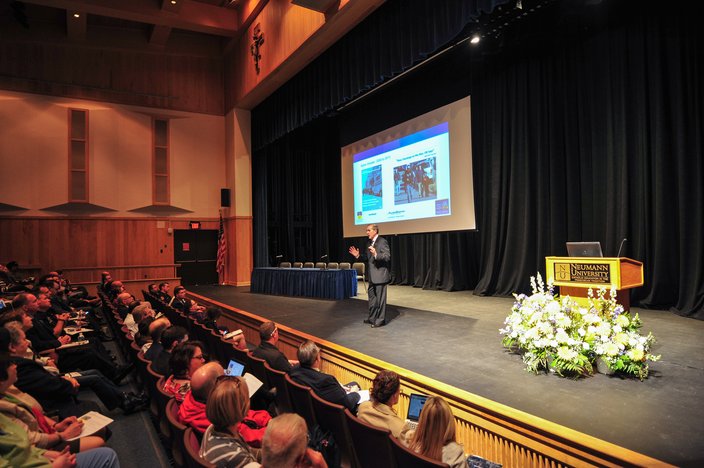 Rich Cordivari, vice president of national operations support at AlliedBarton Security, gives a presentation on practical preparedness during Wednesday's forum on protecting businesses and employees during an active shooter situation.

“You need to be aware at any moment that something could happen,” Boyce said. “You have to have a plan. Visualize what you would do. How would we lock down this room? Where would you hide? Run, hide and fight are the options you need to decide.”

The three officers recommended trying to hide behind something solid, rather than a counter or drywall, to get added protection from gunfire.

“Disrupt (the shooter’s) process,” Coleman said. “If you have something in your hand, throw it at him,” keys, hot coffee, a laptop computer.

A checklist and a guide for active shooter preparedness are available on the Department of Homeland Security web site.

Guillaume Perrin, hospitality vice president of Sun Center Studios, a film and television production facility in Aston, was in attendance because the firm does not have a plan in place.

“I came because my company is planning a much bigger project,” Perrin said. “We have eight employees but when we have a production there, it is up to 400 in place.

“We will have a meeting, sit down and write a memo. We never had a drill but we will train," he said. "I think the public needs to be trained, too.”