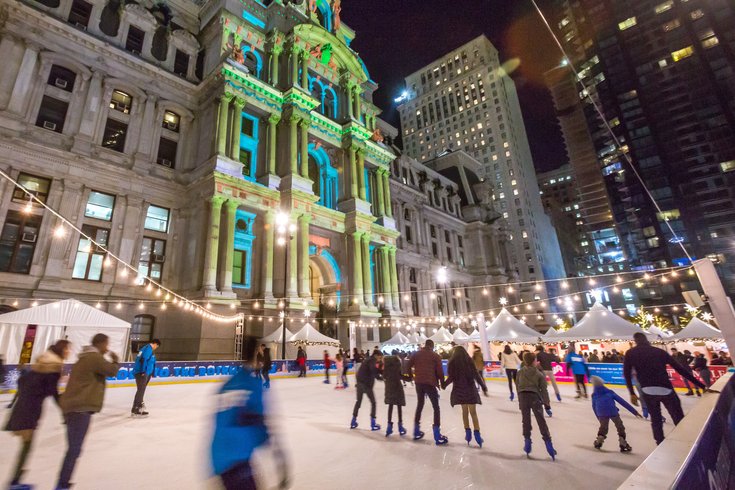 Holiday lights illuminate City Hall during the 2017-18 'Deck the Hall Light Show, ' while people skate on the Rothman Institute Ice Rink at Dilworth Park. The light show and skating rink will return for the 2018-19 holiday season, again joining the Made in Philadelphia Holiday Market and other attractions.

For the second year in a row, the Center City District is bringing a holiday light show to the neighborhood.

The show, called the "Deck the Halls Light Show," will be projected onto the facade of City Hall, set to holiday music. It premiered last year and will return on the west side of the building.

The colorful display debuts Monday, Nov. 19 and will run until Jan. 1. It is a collaboration between the CCD and 6ABC, presented by Independence Blue Cross.

The show has expanded a bit this year, but no more details have been revealed quite yet, except that it will be more vibrant than ever, according to an announcement from the CCD, but we'll have to wait for more on what that means.

Curbed has a video of last year's opening night of "Deck the Halls," just to give you a taste.

“We’re thrilled to be a part of this exhilarating spectacle of sight and sound,” said Bernie Prazenica, president and general manager of 6ABC.  “It’s great to be a part of the holidays right here in Center City, and we’re excited to see how show producers will exceed last year’s electrifying performance.”

Other holiday features will return to Dilworth Park for the season, too, like the ice skating rink, a food and drink cabin, fire pits, and the popular Made in Philadelphia Holiday Market.