'I don't like being put in a box in real life; that goes the same for being typecast as an actor' 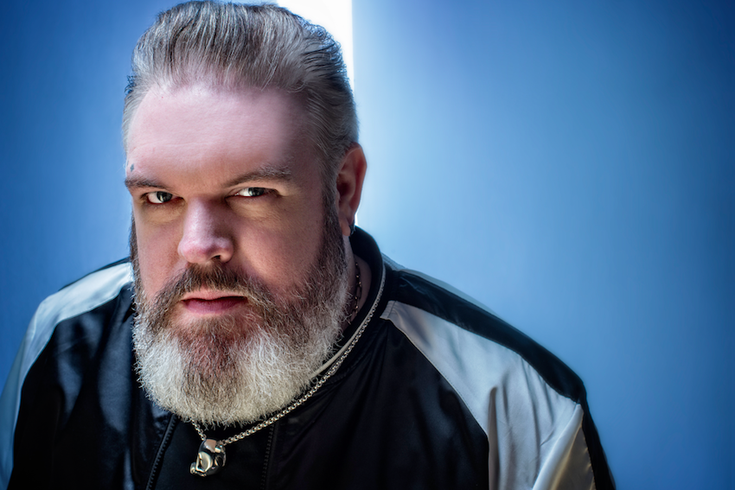 When Northern Ireland-born Kristian Nairn steps into The Fillmore Philly’s Foundry Room on Saturday night, he won’t be wearing the furry, nappy costume that once defined him as “Hodor,” the gentle giant protector of “Bran Stark” in their escape from Winterfell on HBO’s wildly popular “Game of Thrones.” My guess is that the 6 ft. 11 in. Nairn will don a T-shirt or track outfit as he’ll be busy on August 26 plying his usual trade – DJ-ing house music favorites – for a “Rave of Thrones” on the evening before the series’ dramatic 2017 season finale.

“Actually no, I haven't a clue,” Nairn said with a laugh when quizzed about Sunday’s plot.

Long before Nairn went into acting, he was playing in Irish electro-pop bands and spinning at clubs such as Belfast’s legendary gay club, Kremlin.

“Over the years, I learned that I enjoyed performing in many different fields,” said Nairn about the curiosities that drove him in front of the boards and before the camera.

“For me, it's all about the fizz that I feel when watching a crowd, or when you nail a scene, or meet fans in the street. It's a very gratifying feeling, so I guess that it's all about connecting with people, and I'm very lucky to have the chances I have been given to do so.”

Though he was spinning at clubs, producing and generally making the monied best from living the club life, Nairn decided to take a risk and start an acting career.

“At one time or another, I've been at crossroads in my life, like we all have from time-to-time. I don't think I've ever opted for the easy option, or the less risky path. There is power in learning to not only accept change, but to thrive on it.”

By 2011 and 2012, he didn’t just wind up on “Game of Thrones” as the nearly-silent “Hodor,” but as a cast member too on BBC America’s “Ripper Street.” Nairn might talk about the acting biz as being “feast or famine,” but, professionally, it seems as if he got the sweet end of the stick.

“Those two jobs did come about pretty close together, but acting is a funny game,” he said.

“To date, I've been very lucky to constantly kept busy in one way or another. Plus, as I don't like being put in a box in real life; that goes the same for being typecast as an actor.”

Don’t expect Nairn to pull a “Hodor” for any other directors.

Loving the “Hodor” character and respecting his quiet dignity and strength is one thing, but Nairn – like his fellow “GoT" cast members – was taken by surprise by the genuine affection shown by longtime George R. Martin deep fans and novice appreciators, especially for his character.

“I think I can speak for most of us involved in the show, that around season 3, the swell around the show grew tremendously,” he said.

“Obviously, it was an instant hit, but by then it had woven its way firmly into pop culture psyche. I grew to love Hodor. It was interesting and strangely liberating to play someone so simplistic and pure of spirit, so I can understand why he is such a loved character.”

The most challenging element of remaining nearly silent throughout “GoT” – being able to convey emotion and rich information in few or no words is an amazing skill, one that “the physically expressive” Nairn was prepared for as he also has a career as a sign language interpreter.

“That, coupled with the fact that I had hearing issues when I was a child, all helped me with how I played the part,” said Nairn.

“The smaller scenes with subtle nuances were much more challenging than the big ones. I enjoyed all of the challenges though.”

That includes dying during GoT’s 2016, a teary finale that has not ceased his undying love and curiosity about where this feudal fantasy fable is heading.

“I was determined to be able to enjoy the show this season as a viewer, not knowing what was ahead. I can't wait to find out, like everybody else.”

I was determined to be able to enjoy the show this season as a viewer, not knowing what was ahead. I can't wait to find out, like everybody else.”

Nairn doesn’t even really have time to watch television as his passionate DJ/producing career is flourishing, especially with the rash of “Rave of Thrones” parties that have come his way. Did it seem weird (as he doesn’t like to be pigeonholed) to continue to walk the “GoT” path, or is he so spirited and so willing to take the hoopla with a grain of salt that he throws caution to the wind?

“That's an interesting question. I was torn at first. I didn't want to mix my careers. I've now twice found myself on the receiving end of firstly: 'he is a DJ, he won't be able to act,' and then: 'he is an actor, he won't be able to DJ,' or 'he's one of the terrible celebrity DJs.' It's mind-boggling. I found myself hearing from clubs and promoters who had done their homework, before it was common knowledge that I was a DJ and it just grew and grew. Rave of Thrones is an immensely fun night, and I stand behind my sets.”

As a house-music head who “likes a little melancholy in my music, even with upbeat house,” and his first original single “Bigger,” Nairn should stand tall.

“'Bigger’ has been a long time coming for me,” said Nairn about his debut.

“I struggled, on my own, and with various wonderful studio engineers to combine the sounds I like and make some cohesive and something I would be proud to play in my set. I'm so pleased with 'Bigger,' and happily, I can say that I'm even more pleased with the other tracks I've been working on since. It's an exciting time for me, and even after all that's happened, I still can't believe it's my life.”