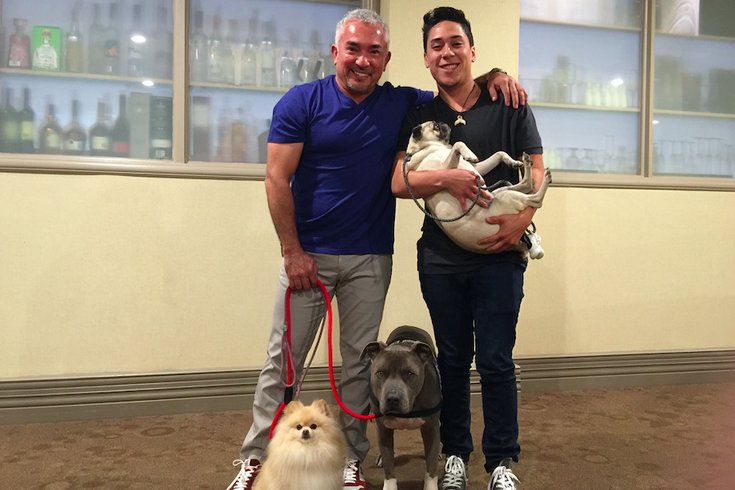 Cesar Millan, his son Andre and friends came to Philadelphia as part of their 'Dog Nation' road trip on Monday, Sept. 12, 2016.

Carol Skaziak has big plans for Sting, a Belgian Malinois dog who’s lived with her in Collegeville, Montgomery County, since April.

For the past three years, she’s run the “Throw Away Dogs” project, which seeks to “rescue, rehabilitate and relocate thrown away dogs so they can now have a purpose to be honored, respected and trusted as K9 working dogs.”

So far, she’s successfully placed 11 dogs with law-enforcement agencies as close as Trenton, New Jersey, and as far away as Maine and Indiana. Sting has presented her with a unique challenge, though.

“He’s so amazing. He’s already trained in explosives detection, but when his handler left the department [where he worked], they couldn’t get a replacement. The dog sat and sat and sat and they heard about me and called offering a donation,” Skaziak said on Monday. “He’s so obedient. He’ll listen to whatever you tell him to do. But if issued a correction on a leash, he will turn around and go to bite.”

"I brought my contribution to America and, of course, taxes. Now, my two kids are contributing to America. We’re making sure that we contribute. I’m the type of guy who wants his country and his people to do better. You have to lead by example." — Cesar Millan

Sting has bitten Skaziak’s husband, a police officer, and her “when I was looking at an injury, without a warning.”

“I don’t know what his previous life was like, but it’s crucial that I find out if [the behavior] can be corrected,” she said, noting that such a remedy would enable Sting to be donated to an underfunded police department that needs K-9 help but lacks the $7,000-plus investment necessary to make it happen. “It’s absolutely possible to repurpose a dog, to give a second chance and a job.”

On Tuesday, the Millans — along with canine friends Junior, Mr. Benson and Sugarplum — will visit with Skaziak to see whether their years steeped in the dog-connecting world can help Sting take that next step toward joining a new police force.

The effort will be the focus of a new Nat Geo Wild show, “Dog Nation,” which will launch early next year.

On Monday, the human duo and pooch trio — still battling the aftereffects of a red-eye flight from the West Coast — took some time to talk about the show’s mission in the lobby of a University City hotel.

They also answered questions about working together on the small screen as a father and son, dog ownership in cities versus suburbs, why dogs and the homeless get along so well and, among other topics, what it’s like to be a Mexican-American in an era of anger-fueled political discourse.

Here are the highlights of that conversation:

PhillyVoice: So, let’s hear all about the new show.

Cesar Millan: Our focus is organizations with certain problems. They’re already doing inspiring things in the community, like ‘Throw Away Dogs,’ which is a very common thing because people do throw dogs away.

She’s seeking the worst-case scenarios, high-level energy dogs, and turning them into police dogs. She makes superheroes out of the worst dogs in America. She finds police departments who can’t fund buying a dog from Germany. For some people, trash is treasure. What I bring to people is a different point of view — I don’t train dogs, I train people — that they haven’t taken into consideration. With this, we’re working with people who are doing amazing things but still need a little help.

Having my son Andre with me, it’s going to give the show a father-and-son feeling. I’m a third-generation dog guy, so here comes the fourth generation coming in to maintain things I’ve learned many years ago.

The kids grew up in 'The Dog Whisperer' [years], an era when I was building a family and a profession. It wasn’t work for him. It was fun. Andre would go in the buckets of water and swim. This is a guy that’s very familiar with what I do. He has no fear around dogs. I started with the ‘red-zone cases,’ had 65 dogs when Andre was little. My two kids were actually raised with a pack of dogs.

PV: What are your earliest memories of all this?

Andre Millan: Well, the bucket situation. I would always come to the Dog Psychology Center, take my Pampers off and go in the bucket. ‘Hey guys, I’m back!’

PV: Where did the idea for this show come from?

CM: I wanted to work with my son. I wanted to do something with him, bring him into my world again now that he’s 22. I’m going to put him in situations where he can fix it, work on it.

PV: Was this always your life plan?

PV: With the talk of giving back to country and family, what do you make of the rhetoric of the election cycle, the talk of walls along the border, as a Mexican-American who crossed the border as a 21-year-old and toiled to make a name for yourself?

CM: Ignorance creates fear and, unfortunately, this is not the first time this kind of behavior has been shared. Now they’re just targeting a different group. Let’s look at it through a dog perspective: In the 1970s, people were afraid of Dobermans. In the ’80s and ’90s, it was the Rottweiler. Then, in the ’90s and the 2000s, it’s the pit bull. So, every so often, humans blame a race or a dog breed.

It’s nothing new, what you’re hearing. What’s sad is that it’s the leadership that’s saying those things instead of seeking a harmonious understanding that everybody has something to share, to add value to the country. Think of it like a dog park. A dog park’s not for just one breed. If you treat it that way, it’s a racist thing, a breed-ist thing.

We need to look at it like, ‘How much can this human help the country?’ I am first Mexican; then, I became an American. I’m the guy who brought exercise, discipline and affection; train the human, then the dog. I brought my contribution to America and, of course, taxes. Now, my two kids are contributing to America. We’re making sure that we contribute. I’m the type of guy who wants his country and his people to do better. You have to lead by example. You can’t say America is the best country in the world if you also act and talk other ways about his own people.

"The reason why homeless people have a more successful relationship with dogs is because they walk all the time. The homeless have a much better lifestyle than a Wall Street person with a dog or a person who owns real estate in LA." — Cesar Millan

PV: Let’s talk about the difference between having a dog in the suburbs, with a yard, and a city like Philadelphia where you might not have one.

CM: Look at it this way: New York versus Los Angeles. New Yorkers walk more than LA people. So, a dog in New York is going to walk more often, get out of his cage more often than a dog in LA. People in LA say, ‘Well, I have a big backyard.’ But the dogs still have to get out. The yard is just a larger cage.

The reason why homeless people have a more successful relationship with dogs is because they walk all the time. The homeless have a much better lifestyle than a Wall Street person with a dog or a person who owns real estate in LA. That’s a more normal lifestyle for a dog.

With those lifestyles you mentioned, they do affection, affection, affection. They don’t walk every day, or maybe 10, 15 minutes walking. So then the dog ends up, for 23 hours and 45 minutes, inside a house. That’s not enough. You’re going to be behind walls 24 hours, do you want 15 minutes outside or an hour? And about the high-energy dogs [involved in the show], they need at least two, three hours outside a day. You call it a house, they call it captivity.

PV: When you look at what your father’s done, do you hope to follow those same footsteps or build upon it?

AM: My goal is to be as established as he is so then I can venture off and do other things. Instead of being just dogs, I want to involve other animals.

CM: This is definitely his idea. He kept saying, ‘Pop, I want to do a show with you.’ As a father, you want to nurture and encourage that but wait for the right moment and format. You want the success so he can benefit from it. We’re going to maintain what people know about me, but what people don’t regularly see is how I am as a father. This show will bring that element in. You’re a dad; you know how important that is.

[Fans] have seen Andre before, they’ve seen him growing up. He definitely has a different view, which he should because he was born and raised in America. He’s the millennial guy and the way they see life is completely different.

I like how he doesn’t want to stay just in the dog world but to help all animals. He’s taking it to another level from my grandfather and father. I took it to another level, now he is. The evolution is great. He’s going in the right direction. Andre wants to do right for the world, and that’s great.

AM: Change perspectives, educate, help spread awareness and also teach prevention. Once you really ingrain an idea or thought into someone, that idea expands and grows within time. With time, examples, help, structure, discipline and exercise, all that can expand to a greater outcome.

CM: I think I became a good example for the grandmas and the moms of the world. Those are my peeps. Those are my fans. By bringing my son into this, he’s going to be a role model for a certain demographic. [Son] Calvin [with a show called 'Mutt and Stuff' on Nickelodeon] is a role model for the 2-to-5-year-olds.

AM: My generation has a lot of opinions coming in from everywhere. If he can’t address that, I can. I’m just turning 22. I know what they’re thinking, in a sense.

PV: What do you hope comes out of this show, highlighting these programs or building support for them?

CM: Both. It’s a community. Family is the first community you know, but if the family doesn’t help each other and communicate, it’s not going to be a balanced family. ‘Ask not what your country can do for you, but what you can do for the country.’ That philosophy needs to come back in America. It’s become very individual-driven. Often, people don’t want to help each other or seek help from others anymore. They want to fix it themselves.

I’m a big believer in the power of the pack. The pack is the family. I was raised in a very traditional family. Our feedback was our own family: grandmother, grandfather, mom, dad. Dogs are very family-oriented, too.

I think sometimes we can just imitate what animals do to find the balance and harmony that everybody wants.