The puppet show, set in the imaginary land created by Fred Rogers, will feature original songs and reimagined favorites 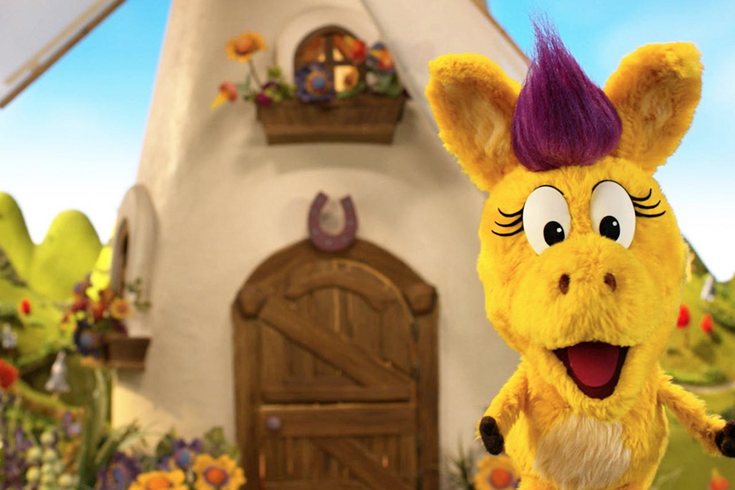 'Donkey Hodie,' a spinoff series of 'Mister Rogers Neighborhood' will follow the adventures of the show's title character, a yellow donkey.

Fans of "Mister Rogers' Neighborhood" will find many familiar features in "Donkey Hodie," a new puppet series set to debut May 3 on PBS Kids.

The spinoff will follow the adventure of the show's enthusiastic title character — the granddaughter of the original Donkey Hodie, who appeared in 59 episodes of "Mister Rogers' Neighborhood."

The original puppet will appear in "Donkey Hodie" as Grampy Hodie. Three other characters, described as friends of Donkey Hodie, also will star.

Just like "Mister Rogers," the new series aims to help preschool-aged children navigate the challenges of childhood. The show is set in Someplace Else, the imaginative land Fred Rogers created for his show.

"Donkey Hodie" will include original music and reimagined versions of the iconic songs from "Mister Rogers." These songs will reinforce the show's themes and adventures.

"As kids laugh and sing along with Donkey Hodie and her friends, they will learn important life lessons about teamwork, empathy and resilience to help them see a world full of possibilities," said Linda Simensky, PBS Kids' head of content.

The series was created by Spiffy Pictures' co-founders Adam and David Rudman and developed by Ellen Doherty, the chief creative officer at Fred Rogers Productions. All three will serve as executive producers.

"Perseverance is a skill that's of extra importance for children right now," Doherty said. "We hope Donkey and her pals will inspire kids to keep trying even when tasks get hard and to face challenges with an 'I can do this' attitude. The show will also help parents guide their children in becoming strong critical thinkers and problem solvers."

"Mister Rogers' Neighborhood" was filmed in Pittsburgh and ran for 31 seasons from 1968 to 2001. The children's show, hosted and created by Fred Rogers, served as the inspiration for the 2019 film "A Beautiful Day in the Neighborhood."