The SiriusXM show features Jerry Seinfeld as its first guest 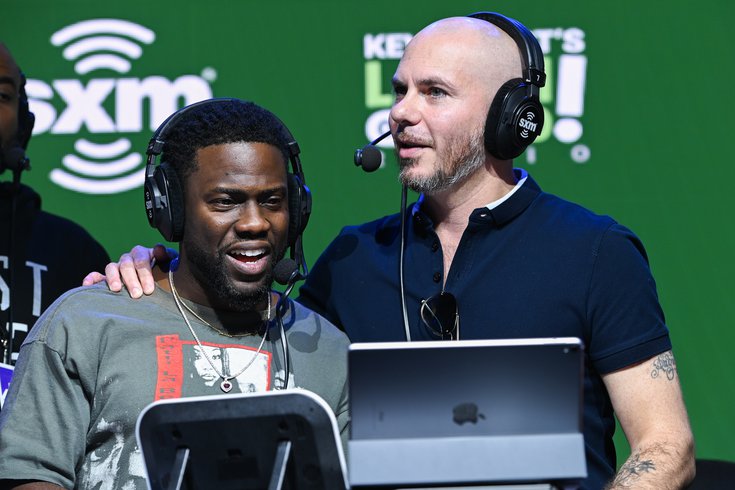 Comedian Kevin Hart, left, during an episode of his Sirius XM radio show, "Straight from the Hart," with musician Pitbull. Hart will host a new podcast, 'Inside Jokes with Kevin Hart."

UPDATE: Kevin Hart may be changing the name of his new "Inside Jokes" podcast after receiving backlash on social media that the name was already taken by other comedy shows.

Hart responded to complaints Wednesday afternoon on Twitter, in particular a message from fellow comedian Andrew Schluz, who also has a show titled "Inside Jokes." The Philly native apologized and said that "all changes are being made ASAP."

I know in your world this makes sense...but in all honesty it wasn’t the case. My team made me aware of this and our title is now being changed. I apologize on me & my teams behalf. We wish you nothing but the best & more success champ. All changes are being made ASAP. https://t.co/SPsjBLlpGb

Comedian Kevin Hart now has his own SiriusXM podcast — and it debuts tonight.

The show, called "Inside Jokes With Kevin Hart," will feature interviews with fellow entertainers, celebrities and comics. News of the podcast — the Philly native's first — was announced Wednesday morning on "The Howard Stern Show."

"I'm sitting down with some of the best voices in comedy to give my listeners the stories behind the jokes they hear on stage," Hart said. "Comedians have been through it all, and I'm excited that I'll be digging deep into the lives of my peers for my first podcast."

"Inside Jokes" will air Wednesdays at 8 p.m. on Sirius channel 96. The first episode features Jerry Seinfeld as the guest. Other celebrated comedians, including Nick Kroll, Bill Burr, Steve Harvey and Hasan Minaj, are scheduled to appear in later episodes.

Sirius also announced the launch of two additional shows from Laugh Out Loud, or LOL, the entertainment company Hart founded three years ago.

"The Ladies Room," a roundtable-style comedy show hosted by actress Jasmin Brown, will air episodes Mondays and Wednesdays at 7 p.m. Brown, who is known for the funny bits she shares on Instagram with her 1.1 million followers, will be joined by co-hosts Natalie Friedman, Briana Lawrence, Renita Woodland and Kiya Roberts.

Hart signed a multi-platform deal with SiriusXM last year that gives him more creative control over his comedy brand, according to the AP. His radio show, "Straight from the Hart," premiered on the Laugh Out Loud channel in 2018. He even recorded a show with the musician Pitt Bull ahead of last year's Super Bowl LIV.

Hart has other projects in the works. On Tuesday, Variety reported he will star alongside Cate Blanchett in the upcoming movie "Borderlands," an adaption of the popular first-person shooter video game.