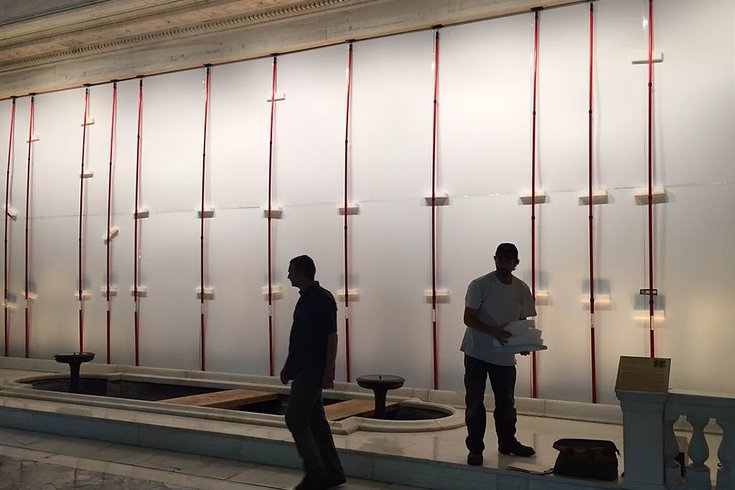 "Dream Garden," a 15-by-49-foot glass-tile mural by American artist Maxwell Parrish in the lobby of the Curtis Center at 6th and Walnut streets, is covered by a protective wall on Thursday afternoon. The priceless mural is a popular stop for tourists visiting the adjacent Independence National Historical Park.

If you're looking to catch a glimpse anytime soon of "Dream Garden," the 15-by-49-foot glass mosaic mural at the Curtis Center, you might be out of luck.

The priceless mural – created with more than 100,000 pieces of hand-blown favrile glass tile in 260 colors under the supervision of Louis Comfort Tiffany – has been covered up by its owner to protect it from further damage. The artwork covers a wall in the lobby of the building at 6th and Walnut streets.

Last week, construction work on a $25 million project at The Curtis was halted after officials noticed damage to the huge mural by American artist Maxfield Parrish from vibrations caused by an ongoing demolition project.

The City's Department of Licenses and Inspections this week permitted construction to resume, though demolition has been halted for the time being.

David Brigham, president of the Pennsylvania Academy of Fine Arts, which owns "Dream Garden," told PhillyVoice last week that vibrations caused a crack to spread along a seam between panels on the left side of the piece. In addition, at least 11 intricate glass tiles loosened and two panels shifted out of alignment, he said.

Mary McGinn, PAFA's paintings conservator, said the academy has erected "zip walls" in front of the piece to prevent further damage. The walls – consisting of foam and plastic panels – apply pressure to the mural wall, keeping the mosaic tiles and panels from shifting.

"We need to put pressure on it just in case there is another vibration event," she said.

Asked about concerns that the mural could sustain further damage with construction resuming, McGinn said PAFA believes the mural will be adequately protected until it can investigate the extent of the current damage.

"We are fine with [construction resuming]," McGinn said. "We are still monitoring the seismometers."

The seismometers, sensitive devices which monitor and measure motion, have been in place since October 2015 and registered vibrations exceeding an agreed-upon safe level at least five times since the renovation project began, Brigham said.

PAFA is still trying to determine what the mural repairs will cost or how long they might take, McGinn said.

"We need to do a little more investigating," she said. "We haven't come up with a plan yet for all that work."

PAFA would like to investigate the piece with borescopes, optical devices with a flexible tube and an eyepiece, to allow the inspection of the inside of the mural to fully assess the damage, she said.

McGinn said she isn't sure how long the piece will need to be covered.

"It's a magnificent piece and we hope we don't have to have it covered for too long," she said.