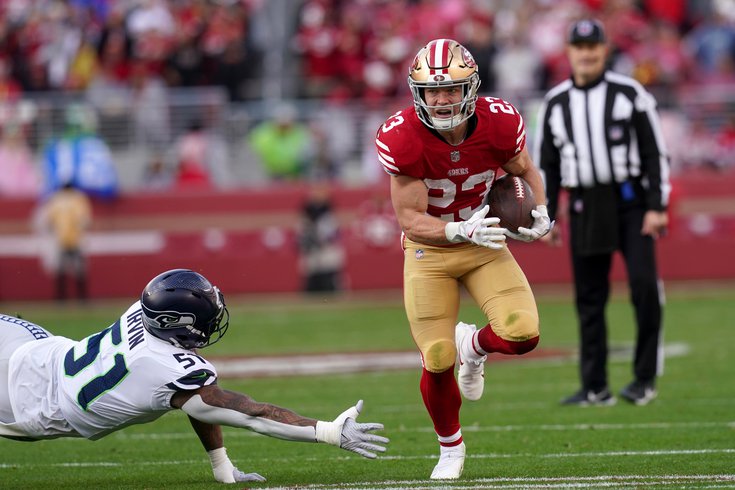 The Philadelphia Eagles may be as healthy as they have been all season heading into the NFC Championship Game against the San Francisco 49ers. The Niners, meanwhile, have some important players who missed Wednesday's and Thursday's practices.

• Maddox's limited appearance on the first day of practice this week is a great sign for his availability on Sunday.

• 11 players got rest days, including Johnson.

• I watched Maddox closely in practice, and he looked like he was able to move around with little issue. Twitter thread of Maddox in individual drills here:

• The Eagles will have all hands on deck, as they have no players with official injury designations.

• The Eagles elevated S Anthony Harris from the practice squad, like they did last weekend against the Giants. They're likely just doing that to give him another game check.

• P Arryn Siposs (IR - Week 15): Siposs collected a loose ball after a blocked punt and was injured while trying to run for a first down Week 14 against the Giants. The Eagles signed 15-year vet Brett Kern to replace him.

*The 49ers have not yet published their official injury report, so we'll update as needed when they do, but Kyle Shanahan revealed who won't practice on Wednesday during a press conference.

• The 49ers' Week 1 starting quarterback was Trey Lance, a dual threat who the Niners traded a bounty of picks for in the 2021 NFL Draft. Lance suffered a season-ending ankle injury Week 2 against the Seahawks, and Jimmy Garoppolo, a player the Niners were open to trading, took over.

They started out with a 3-4 record, but eventually got hot and haven't lost since. They are currently riding a 12-game winning streak, the longest in the NFL. Five games into that streak, Garoppolo suffered a broken foot and the Niners were forced to turn to their No. 3 quarterback, rookie Brock Purdy, who was the 262nd and final pick of the 2022 NFL Draft. Purdy guided the Niners to a 5-0 record to close the regular season, and as noted above, two playoff wins.

• Deebo Samuel is expected to play on Sunday.

• Christian McCaffrey was shown stretching out his calf muscle during the Niners' win over the Cowboys in the divisional round. It's noteworthy that on the 49ers' final drive, McCaffrey was only on the field for two of the six plays. He played the first snap of that drive, and then Elijah Mitchell got four straight carries, and then McCaffrey came in on third down and caught a quick screen pass for a loss of a yard. It would seem nuts to not have the best running back on the field in that situation, unless of course McCaffrey was hurting. His non-participation in practice on Wednesday confirms that he is not 100 percent, but is also makes sense to allow him to rest for calf.

• Elijah Mitchell is nursing a groin injury. He previously missed Weeks 2-9 and Weeks 13-17 with an MCL sprain.

• In addition to appearing on the injury list, Charles Omenihu was arrested earlier this week on suspicion of domestic violence. Shanahan said that Omenihu's arrest will not keep him from playing in this game.

• McCaffrey and Mitchell are both expected to play, but they have now been unable to practice two straight days.

• Mitchell is listed as questionable, but it's a bad sign for the Niners that he did not practice at all this week. Maybe he won't play after all?

• McCaffrey was a full go on Friday. He'll play on Sunday. There was never really a question of whether he will play. It's more about how much his calf injury will affect him.

• The 49ers elevated RB Tevin Coleman and CB Jackrabbit Jenkins from the practice squad. Coleman's elevation is interesting, since Mitchell did not practice all week and is questionable for this game. Jenkins could just be elevated in the event depth CB Ambry Thomas can't go.

• QB Trey Lance: As noted above.

• CB Emmanuel Moseley (IR): The Niners' starting outside cornerbacks to begin the season were Charvarius Ward and Moseley. They also have Jason Verrett, who has missed 105 games over his nine-year career. Verrett tore his Achilles this season and never played a game. Moseley tore an ACL Week 5 against the Panthers. With Moseley and Verrett's seasons both over, second-year corner Deommodore Lenoir has been the CB2 for most of the season. He is likely to be targeted by the Eagles more frequently than Ward.

• DT Hassan Ridgeway (IR): Ridgeway got a fair amount of playing time for the Niners as a rotational DT this season, playing in 12 games, and starting 7. He had 28 tackles, a sack, and 4 QB hits. He suffered a pectoral strain Week 13 against the Dolphins, and landed on IR. The Niners have good defensive line starters, but they are thin on depth.