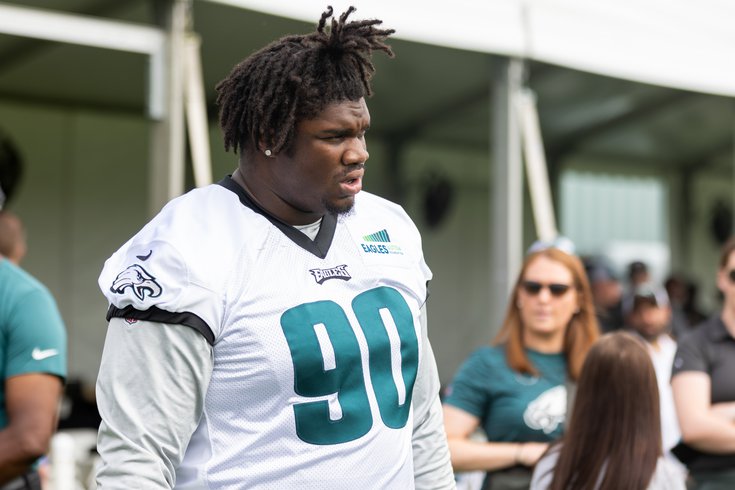 The Philadelphia Eagles announced on Wednesday that they have activated the 21-day practice window for Jordan Davis to return from injured reserve. Davis has missed the last four games with an ankle injury suffered Week 8 against the Pittsburgh Steelers. The Eagles will have to decide by Saturday at 4:00 p.m. whether or not Davis will be elevated from injured reserve, and thus eligible to play this Sunday against the Tennessee Titans.

Davis had meager stats through his first seven games (14 tackles, 1 batted pass), but he was effective in clogging up running lanes up the middle. In Davis' absence, the Eagles signed defensive tackles Ndamukong Suh and Linval Joseph to help out the Eagles' run defense. Joseph occupied the nose tackle role that Davis played almost exclusively through the first six games. His role did expand in the game in which he got hurt, as he began getting snaps in some even-man fronts.

It will be interesting to see what kind of role the Eagles have in mind for Davis when he returns, given the extreme depth the Eagles have at defensive tackle, as Jonathan Gannon will have to juggle snaps between Fletcher Cox, Javon Hargrave, Milton Williams, Suh, Joseph, and now also Davis.

Joseph has played very well in the nose tackle role, and the team should probably just allow him to continue to play it. Davis could still play the nose some and keep Joseph's snap counts down, but the guess here is that his role will also expand a bit.

Will he get snaps in four-man fronts, and how soon will that happen after he returns from injury, if so? Will Davis and Joseph play at the same time? Should they start Davis at safety with Chauncey Gardner-Johnson out? To be determined...