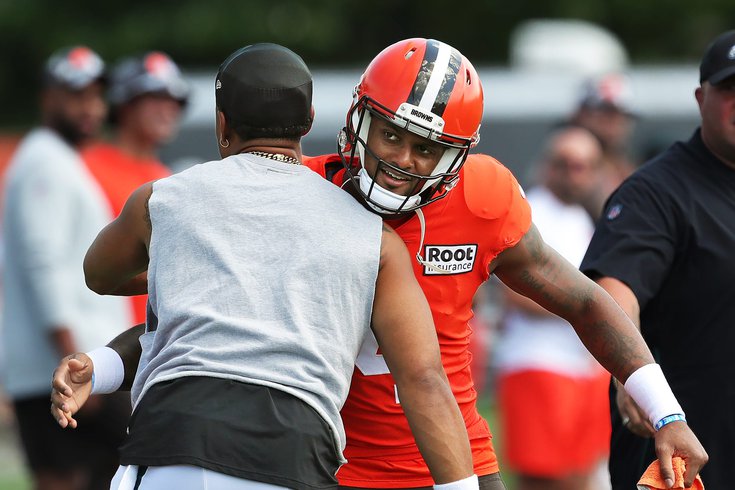 It was an eventful day in Berea, Ohio, as the Philadelphia Eagles scrimmaged against the Cleveland Browns on the day that Deshaun Watson's suspension was finalized. We'll get to more on that momentarily, but first, let's get to the practice notes.

• I though Jalen Hurts was OK. On the positive side, he had one of his best throws of camp today. He stepped up into the pocket and then to his left while keeping his eyes down the field, and threw on the move to A.J. Brown, who was headed toward the sideline about 25 yards down the field. The ball was on the money in between the cornerback and the safety. Great throw.

Hurts has also found something of a crutch throw this camp. He has probably hit Brown on about dozen 10-yard out routes on the right side of the field. Brown always seems to get a lot of separation on that route, and it's a throw in which Hurts gets it out with very good anticipation. Look for that to be a go-to route on 3rd and medium this season.

On the downside, on a similar play as the one noted above in which Hurts moved up into the pocket and then to his left, he threw across his body to the middle of the field and missed, behind Dallas Goedert, where safety Ronnie Harrison was able to break it up. He was lucky that that throw fell incomplete.

Hurts verdict: He made some good throws, and he didn't turn it over (he has avoided INTs throughout camp), but the offense really struggled to move the ball for stretches of time today, and that was with the Browns missing Myles Garrett, Denzel Ward, and CB2 Greg Newsome. I'm going stock neutral. 😐

• DeVonta Smith had an active day. He had a catch in the middle of the field with some room to run, and he looked like he had some juice in the open field. There have been a few times throughout camp in which I have been surprised by Smith's athleticism in which he left me thinking, "I didn't know he could do that." For example, in each of the last two practices, he had leaping catches near the sideline in which he showed off serious hops. Today's flashy run after catch was another example.

Smith also got into it a bit with safety Richard LeCounte, who played at Georgia and faced Smith when he was at Alabama. Apparently Smith and LeCounte have a history.

Joint practices getting spicy! Browns Richard LeCounte extended his trashtalking toward #Eagles DeVonta Smith. Smith says last time he saw LeCounte he put him on the bench in reference to Alabama-Georgia days.

That incident was actually in a high school all-star game.

MUST SEE VIDEO: #ArmyBowl East vs. West 1-on-1 drill gets HEATED! Richard LeCounte pushes DeVonta Smith 5 yds out of bounds over the bench! pic.twitter.com/TtYIWSSwyS

Also, this is fantastic:

That's fun trash talk and all, but I think it goes beyond that. I imagine Smith appreciated his head coach having his back, and with a pretty sweet retort, too.

Players from each team were woofing at each other throughout the final 11-on-11 session of the day.

• Dallas Goedert had a very active day again. In the past, we have noted that A.J. Brown, DeVonta Smith, and Quez Watkins are all capable of making plays at all three levels of the defense. The same can be said for Goedert, who was fifth in the NFL — and first among tight ends by a wide margin — in yards per target.

When you have four guys on the field at the same time who can get vertical, that is a great complement to an elite rushing attack.

• A trio of late 2021 draft picks in Tarron Jackson, Marlon Tuipulotu, and Patrick Johnson have had very encouraging camps. Jackson got first-team reps today, and looked good turning the corner on the first snap of the day against Jedrick Wills. Jackson's get-off at the snap has been excellent.

Tuipulotu dominated in one-on-ones, and today he did it with quickness instead of power.

And finally Johnson was disruptive all day in the backfield. He had at least one sack, and came close a few other times. Jonathan Gannon praised Johnson for the "violence" that he has been playing with this summer.

• I was impressed by Browns RB Kareem Hunt. Howie Roseman should at least find out what it would take for the Browns to trade him. He would instantly be the best back on the team.

• There were two outstanding celebrations today.

• For the first time all camp, Arryn Siposs had a long punting session in which he was going for distance. I'm torn on his performance. He had some bangers, but he also hit two low line drives that I'm pretty certain were not meant to be low line drives. His punt distances and hangtimes:

Again, those distances are good, but I'd be worried about to two mis-hit balls that had fewer than 3.5 seconds of hangtime. In regard to hangtime in general, back when Donnie Jones was the Eagles' punter, he would routinely top 5.0 seconds of hangtime, and would max out at around 5.5 seconds. Siposs never really came super close to any five-second punts.

• On the punt returner front, three players got reps today:

• Thank God the Eagles did not trade for Deshaun Watson. He would have been really hard for Eagles fans to root for, and personally speaking, covering his whole saga would have really sucked. This guy has no remorse whatsoever.

Deshaun Watson on why he’s apologizing then: “For everybody that was affected by this situation. There were a lot of people that were triggered.”