The Eagles are a very obvious choice this week, but the dreaded "trap game" might be in play. 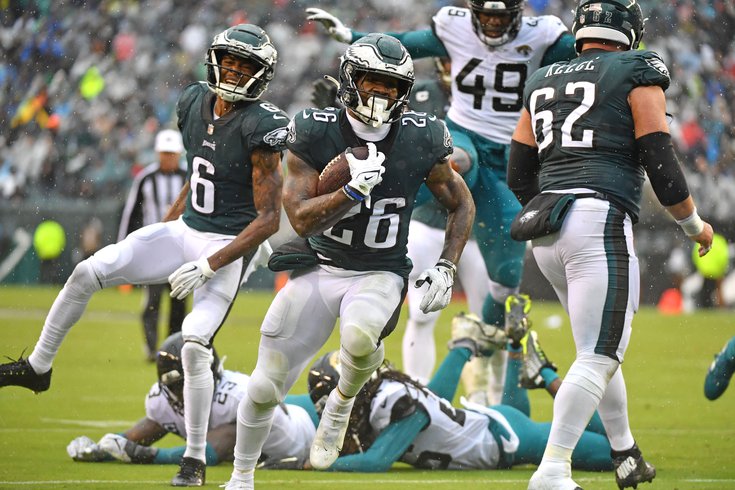 Can Eagles RB Miles Sanders follow up a career day out in Arizona this week?

Will the Eagles keep on rolling and improve to 5-0 or fall into the dreaded trap game against an inconsistent Arizona out west?

While most of our writers see the Eagles coming out on top again, Eytan Shander feels the speed bump coming.

The Arizona Cardinals haven't played great football this year, yet still find themselves with everyone else out west. They get their best WR back from suspension and are slowly getting healthier at the position.

The Eagles are the best team in the NFL, the lone undefeated squad, and have become a public darling in the media and betting worlds. Sure, Philadelphia has the talent to obliterate the Cardinals, but it's the NFL and it's hard to win 17 straight games.

It's a perfect look ahead opportunity for the Eagles as they've flown higher than the Cardinals, and have a Dak Prescott return on the horizon.

How many feel the same? Let's take a look...

• Inquirer.com: All three of the Inky's Eagles writers are expecting a Philly victory. Jeff McLane wrote an extended reasoning for this, but here's a snippet of why he says they'll prevail 31-23:

It’s still too early to make definitive claims, but the Cards defense hasn’t looked good in most respects. They’ve struggled to generate much of a pass rush. Defensive tackle Zach Allen has been a handful for O-linemen and should keep guards Landon Dickerson and Isaac Seumalo — if his ankle is OK — plenty busy. Defensive end J.J. Watt isn’t what he once was after so many injuries. Just last week he had a procedure to correct an irregular heartbeat. The biggest issue in Arizona has been on the back end, though. Facing Patrick Mahomes, David Carr, and Matthew Stafford in the first three weeks may have contributed to some struggles in coverage. But Eagles quarterback Jalen Hurts should have some favorable matchups in the secondary with receivers A.J. Brown and DeVonta Smith and tight end Dallas Goedert.

• The Athletic: The Eagles are going be the favorites in most of their matchups going forward now, and it's well deserved, writes Vic Tafur. He struggles to see how the Cardinals really keep up here, but with a big primetime game looming against Dallas next week, that might open up the door for Arizona to at least cover.

People are starting to talk about the Eagles like they did about the Bills two weeks ago. (And Philadelphia will be favored in every game the rest of the season.) But it’s deserved. The Eagles rank third in explosive play rate (14.4 percent). The Cardinals’ defense, meanwhile, has allowed explosive plays at the league’s highest rate (15.6 percent).

I am not sure how the Cardinals keep up with the Eagles, given that Arizona ranks last in explosive play rate (7.2 percent). But Kyler Murray should be motivated in a matchup against a dangerous, young quarterback in Jalen Hurts that is the new guy and has seemingly passed Murray by. When Murray is aggressively looking to run, he can put up points against anybody, plus tight end Zach Ertz has a favorable matchup against his old teammates. The Eagles are coming off an emotional comeback win over the Jaguars and former coach Doug Pederson, are flying across the country and have a big game against the Cowboys coming up. We don’t think they will lose, but they will leave the back door wide open if need be.

• Gregg Rosenthal, NFL.com: The Cardinals beat a dysfunctional Carolina Panthers team last week, so how much can you really take away from that as far as where Arizona stands? It's a 31-17 Eagles pick for Rosenthal.

Did the Cardinals find some answers defensively last week or did they just play the Panthers? My guess is the latter. It’s crazy that these two organizations were in similar spots late last season, teams at the back end of the playoffs, waiting to see if their young coaches had systems in place that would take hold. It feels weird to keep waiting for Kliff Kingsbury despite his contract extension. [NFL.com]

• Pete Prisco, CBS Sports: Again, the Cardinals are coming off a win, but a win against a bad Carolina team.

The Eagles are riding high as the last undefeated team, but this won't be an easy trip. The Cardinals seemed to right things last week in the second half against the Panthers. But this is a big step up in competition. Look for the Eagles to keep it rolling -- even with the Cowboys on tap next week.

• ProFootballTalk: PFT sees the Eagles as the obvious choice too, but also see the trap game angle in play.

MDS’s take: The Eagles are playing great football on both sides of the ball, and they should win this one easily.

Florio’s take: This is a potential trap for the Eagles, especially with the Cowboys looming.

• Sheil Kapadia, The Ringer: The idea of "any given Sunday" gives the Cardinals some glimmer of hope, but when your biggest obstacle is the play clock, you've got bigger issues.

The biggest rivalry in American sports right now is Kliff Kingsbury vs. the play clock. Every half of every game, the play clock nears zero, the Cardinals call timeout, and Kyler Murray and Kingsbury yell at each other. In a world filled with uncertainty, it’s one of the only things we can count on as a society.

This is an “any given Sunday” game. There’s no real reason to think the Cardinals should win. The Eagles are the better coached team and the more talented team. Their offensive line dominated last week in a win over the Jaguars. They’re the only remaining undefeated team and are second in the NFL with a +44 point differential. If you played this game out 100 times, the Eagles would more often than not win by double digits.

But football is weird. Murray thrives in chaos. Turnovers swing games. The Eagles have some injuries, and they’ve been shaky on special teams. It’s conceivable that they look past the Cardinals and ahead to their big Week 6 matchup against the Cowboys. But given what we’ve seen from these teams so far this season, I’m not going to be the one predicting that will happen.

• Bill Bender, The Sporting News: The Eagles' momentum won't slow down this week.

The Eagles are the last unbeaten team left in the league, and Jalen Hurts is building a MVP case with each week. The Cardinals are 23rd in the league in pass defense, and Hurts averages a league-best 9.1 yards per passing attempt. Kyler Murray will make some fantastic plays, too, but the Eagles keep rolling.

• Vinnie Iyer, The Sporting News: And it'll have them cover the spread too.

The Eagles should get their passing game going in the desert away from the wind, rain and cold at home. Jalen Hurts will roll with A.J. Brown and DeVonta Smith and the Eagles' big-play running game also will have impact. Kyler Murray won't see as many wide-open spaces as a dual threat against Philadelphia's defense.

Pick: Eagles win 30-22 and cover the spread. [The Sporting News]