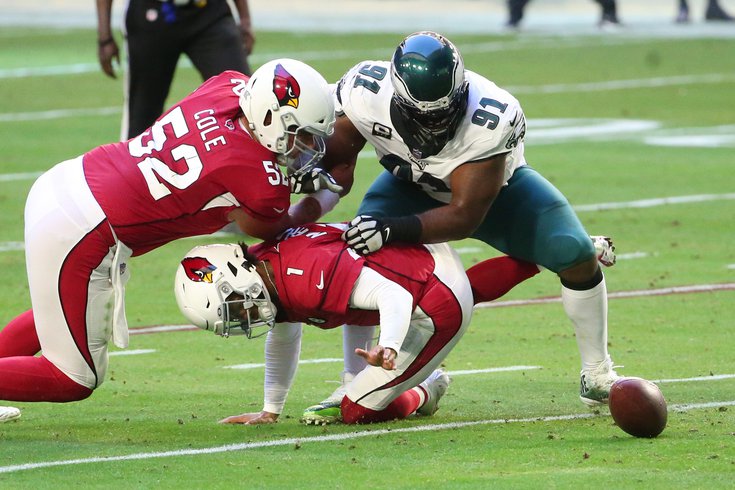 The Eagles' defensive line could go feastin' against a banged up Cardinals offensive line.

For the gambling enthusiasts, here are my Week 5 NFL picks. To note, the team logos indicate who I think will win the game, not cover the spread. At the end of the picks, I'll note a few teams that I like based on the spread.

Colts at Broncos (-3.5): The Broncos have already played in primetime twice, and they'll be the only game on TV four more times this season:

Why did the NFL think fans nationwide would be interested in this team?

Anyway, at least the Broncos have been OK on defense for the most part, while the Colts have been a mess on both sides of the ball, and they'll be without Jonathan Taylor.

The Giants feasted on their super easy early schedule this season, but their games will get a lot harder. Uncertainty at the Giants' quarterback position makes this a tough game to call against the spread, but this is a game that the Packers should win comfortably.

Steelers at Bills (-14): 14 points is an eye-opening line. The Steelers haven't had a losing record since 2003, a streak that appears to be in serious jeopardy. Here are the percentage chances of winning that ESPN's Power Football Index gives the Steelers of each of their games the rest of the season:

They're not over 50 percent in any game. In the future, a pairing of T.J. Watt and Will Anderson would be frightening, but they're going to have a long season.

Chargers (-2.5) at Browns: It looks like Justin Herbert is healthy again, so, ugh, this line looks so low that I'll go ahead and futilely trust the Chargers to play to their level of talent and hate myself for it on Sunday.

Bears at Vikings (-7): The Bears don't have a real NFL offense.

Lions at Patri*ts (-3): The Lions have the No. 1 offense in the NFL, both in terms of yards and points. Unfortunately, they're also the No. 32 defense in both categories. They can't close out games, but at least they're fun to watch? I do like their chances against a bad Patri*ts team that will now be led by rookie Bailey Zappe.

Seahawks at Saints (-5.5): Honestly, if the Saints are hellbent on going all in to win eight games this season as their offseason moves suggested, they may be better off with Andy Dalton over Jameis Winston.

Dolphins (-3.5) at Jets: The Dolphins' early season heat wave bump is over, and they're down their starting quarterback. Meanwhile, the Jets are an interesting young team that may be starting to build some confidence. I was tempted to take the Jets to win outright here, but the Dolphins are just a more talented team right now. I do like getting 3.5 points with the Jets, though.

Falcons at Buccaneers (-9): In a weird way the Bucs' 41-31 loss at home to the Chiefs Week 4 was actually an encouraging outcome. Their offense had struggled badly through the first three weeks of the season, and they finally got back on track, even if their defense had a letdown game against an elite quarterback who made incredible plays all game long. They're getting healthier at wide receiver, and should be able to easily handle the Falcons.

Titans (-2.5) at Commanders: If Carson Wentz has another game that looks anything like his performances against the Eagles or Cowboys, calls for his benching are going to ramp up substantially.

Texans at Jaguars (-7): The Texans are probably the worst team in the NFL.

49ers (-6.5) at Panthers: The Niners have looked great in two games against divisional rivals (the Seahawks and Rams) this season, but they have played to the level of — and even lost to — two other shaky opponents in the Bears and Broncos. For my tastes their offense is a little too dependent on Deebo Samuel making otherworldly plays, which makes them an inconsistent team to rely on. They'll beat this trash Panthers team, though.

Eagles (-5) at Cardinals: After having taken a close look at this Cardinals team, there isn't much to like about them. Offensively, with DeAndre Hopkins serving a suspension, they have not been able to make many plays down the field, and they struggle to run the ball. Defensively, their pass rush is nearly non-existent, and while they have some talent in their back seven, there are too many holes to make up for the lack of pressure generated on the quarterback.

They are also banged up, with 13 players on their injury report, including three offensive line starters and WR Marquise Brown.

As long as the Eagles are not looking past the Cardinals to their Week 6 matchup against the Cowboys, they should cruise.

Cowboys at Rams (-5.5): The Rams can't block anyone and the Cowboys' pass rush has been very difficult to block so far this season. That's a bad combo for the Rams. #Analysis. Matthew Stafford looks nothing like the quarterback who got hot down the stretch last season and won a Super Bowl. He's making bad decisions and has been often been wildly inaccurate.

A Dallas win would set up a HUGE Week 6 showdown between the Cowboys and Eagles in Philly. I mean, it'll be huge either way, but even huger if the Cowboys come in at 4-1. #Huge.

Bengals at Ravens (-3): The Bengals smoked a very injured Ravens team last year, twice, by a combined score of 82-38. This feels like a game Baltimore immediately circled when the schedules came out in May.

Raiders at Chiefs (-7): The Chiefs were my preseason Super Bowl pick, and I can't think of too many scenarios where I'll be picking against them this season, as usual.