Week 9 NFL picks: Rounding up the experts' predictions for Eagles vs. Chargers 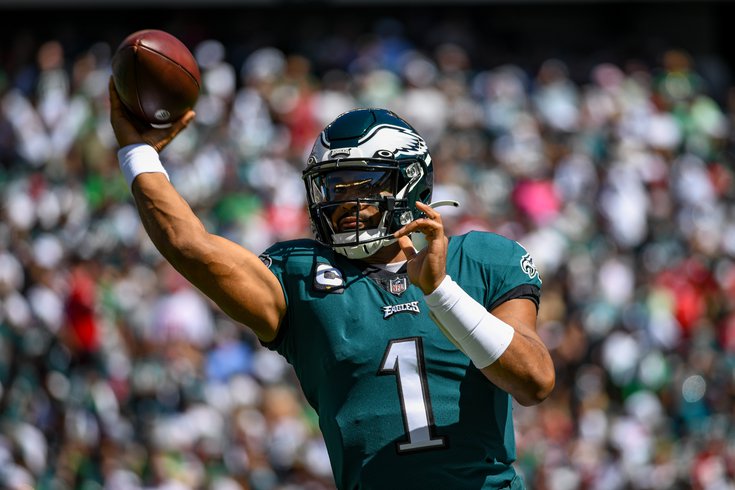 Twice so far this season, the Eagles have tried to stack together back-to-back wins, and both times they've come up short. And while they should have more chances down the stretch given they have the NFL's easiest remaining schedule, the Birds will get another chance this weekend — and a pretty good one at that — when they host the Los Angeles Chargers at the Linc.

Not only are Eagles, who are 1.5- to 2-point underdogs depending on where you look, looking for their first win streak of the season, they're also looking for their first home win of 2021, something that had become a staple under Doug Pederson (winning home games, that is) but has not yet taken hold in the early days of the Nick Sirianni Era.

Can they pull of the upset and let Eagles fans begin to wonder if this is a playoff team, at least for a week, as they currently sit a game behind the Panthers for the NFC's newly-added third wild card spot? Or will the Eagles again follow up a win with a disappointing loss?

As we do every week, we've rounded up a slew of predictions from both the local and national media to get a feeling for how the experts see this Eagles vs. Chargers matchup playing out — including a few against the spread. Let's dive right in...

• PhillyVoice: Just like last week, there's a fairly even split among our writers, at least as even as it can be when you have an odd number of people picking. Here's the prediction from Kyle Neubeck, who is in the majority with the Eagles winning (26-21)...

Picking the Eagles two weeks in a row seems insane, but I choose to view last week as a step forward for the coaching staff, regardless of how bad the opponent was. The Chargers have been trending down the last couple of weeks, Justin Herbert was dealing with a hand issue at practice this week, so give me the team playing at home even though I still think the Eagles aren't very good.

• Inquirer.com: All three of their Eagles beat writers are going with the Chargers, including Jeff McLane, who sees Philly dropping this one by a score of 31-26.

Every game is big in the NFL — Captain Obvious alert! — but Sunday’s meeting with the Chargers may tell us the most about Nick Sirianni and his team through nine games. They dismantled the Lions last week, but their opponent may have had one of the five worst performances I’ve witnessed, and the Eagles were essentially in a must-win situation. I guess the latter could be said about Sunday, but Justin Herbert and company present a greater challenge. ...

I think Sirianni’s group will continue to put forth the necessary effort, and I think the decreasing number of mental errors shows overall improvement. But I don’t think the Eagles have enough offensive firepower to keep pace with the Chargers or enough on defense to stifle Herbert at length. I see a well-played loss, which may not be enough to satisfy the masses.

• NJ.com: Three of their six writers are taking the Eagles, including beat writer Mike Kaye...

While the Eagles’ blowout of the Detroit Lions was a huge boost to morale, the team still isn’t “fixed” just yet. The Eagles will look to, again, run the ball against the Los Angeles Chargers’ porous run defense, and it should work.

That said, when Justin Herbert gets on the field, he should be a tough task for the Eagles’ secondary. This is a tough one to call, especially with Herbert dealing with a throwing-hand injury.

The Eagles finally snap the home losing streak in a toss-up.

• Bleeding Green Nation: For the second week in a row, the typically home-happy BGN staff is going against the Eagles by a 4-3 split.

• The Athletic: Both Zach Berman and Bo Wulf are taking the Chargers in this one. Here's more from Berman, who sees a 28-23 win for Los Angeles...

The Chargers have the better roster and the advantage at quarterback. When those two are on the other team’s side, it’s difficult to win. The Eagles’ best chance of winning this game is if their defensive line can outplay the Chargers at the line of scrimmage. The Eagles haven’t done that frequently enough this season, but if they can get to Herbert and prevent easy completions (or if Herbert is hindered by the hand injury), then they’ll keep the game close. On offense, my guess is the Eagles continue running the ball more than they did earlier this season. But if they fall behind early, I’m skeptical they’ll stick to the run. I have a hard time seeing Hurts keeping pace with Herbert, and I don’t think the defense will be able to keep this game in the teens. The Eagles lose at home again.

The Eagles keep getting these opportunities to return to relevance in the wide-open NFC race for the seventh seed, and they keep coming up short. I liked some of the Chargers' post-bye defensive adjustments, even if injuries at cornerback short-circuited their day. Justin Herbert and offensive coordinator Joe Lombardi were flummoxed by two of the league's best defensive minds in back-to-back games, but Eagles defensive coordinator Jonathan Gannon is not in that league, despite a blowout win in Detroit. Lay the points.

• ESPN: Just two of their 11 experts are taking the Eagles. That's only one fewer than last week against the Lions.

The Chargers have lost two straight and Justin Herbert is struggling. It's time they let him play looser. I think they will here. The Eagles played well last week, but that was against the Lions. The Chargers will get back on track as Herbert plays well.

• CBS Sports: Just one of their eight experts is picking the Eagles to win. He's also the only one who thinks the Eagles will cover the 1.5-point spread (which kind of makes sense given how small that number is).

• ProFootballTalk: Both Mike Florio and Michael David Smith have the Eagles losing to the Chargers on Sunday. Here's more from MDS, who sees a 28-14 win for L.A.

• USA TODAY Sports: Just one of their seven experts is picking the Eagles.

• Bleacher Report: Chargers 31, Eagles 20 (NOTE: All six of their writers are taking L.A. to both win and cover.)

The Los Angeles Chargers haven't won in nearly a month, and they didn't come close to covering in losses to the Ravens and Patriots. But the Philadelphia Eagles aren't on Baltimore or New England's level, and our gang is unanimously on board with the Bolts laying just two points in Philly on Sunday afternoon.

Once upon a time, the Chargers were favored by at least a field goal in this spot at most books. Trends have pushed the line down, but this does seem like an obvious week for a talented L.A. team to bounce back and for an unreliable Eagles team to remind us not to expect much of what we saw from them in a blowout victory over the lifeless Detroit Lions in Week 8.

Against teams with winning records this season, the Eagles are 0-3 with an average margin of defeat of 12.3 points. We'll sacrifice two here.

• Sheil Kapadia, The Athletic: Sheil picks games against the spread every week, and this week he thinks the Chargers cover against the Eagles.

Concerning stat when it comes to the Chargers’ offense: They rank 31st in success rate. Los Angeles is seventh in EPA per drive on offense, but the disparity suggests that the Chargers have lacked consistency and benefited from coming through in some high-leverage situations, which might not be sustainable. Justin Herbert, meanwhile, is dealing with a hand injury going into this game. The Chargers have lost two in a row.

As for the Eagles, they incorporated more under-center runs last week in their blowout win against the Detroit Lions. They ran for 101 yards with Jalen Hurts under center, by far a season-high. In their first seven games combined, they had 76 rushing yards from under center. Combining those runs with play-action seems like the Eagles’ best chance for success.

The Eagles’ defense has struggled against every good quarterback it has faced. Herbert has gone through some growing pains, but assuming he’s relatively healthy, I think he’ll bounce back here.

The Chargers' biggest weakness is their run defense. The Eagles were committed to running more without Miles Sanders in Detroit, but that was tied to being guaranteed a positive game script. The Chargers will adjust with Justin Herbert in the passing game and not force things downfield, working the short-to-intermediate effectiveness with Austin Ekeler and Keenan Allen. Jalen Hurts will be a solid dual threat with Los Angeles' secondary dealing with injuries, but he doesn't have the same reliable depth to catch up with Herbert.