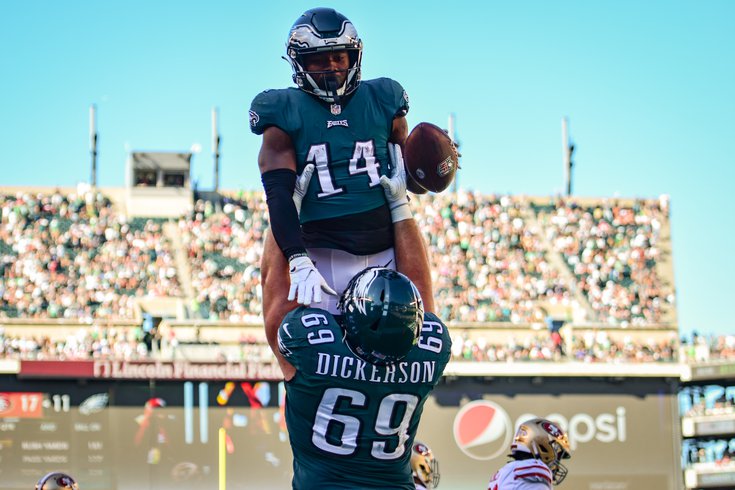 For the gambling enthusiasts, here are my Week 9 NFL picks. To note, the team logos indicate who I think will win the game, not cover the spread. At the end of the picks, I'll note a few teams that I like based on the spread — with all lines coming via Sidelines.io.

Jets at Colts (-10.5): Through the first eight games of the season, Carson Wentz has at times looked like the 2018/2019 version of himself, in the following ways:

There have also been some 2020 moments sprinkled in, like this:

One of the very worst things I've seen a QB do.

As for the Jets, screw you Mike White, for knocking me (and I'm sure many others) out of my survivor pool last Sunday.

I'll guess White comes back down to Earth on Thursday night.

Broncos at Cowboys (-9.5): The Cowboys are rolling.

Texans at Dolphins (-6.5): This matchup has huge draft positioning implications, but we'll get to that in our Week 9 non-Eagles rooting guide.

Both of these teams are on seven-game losing streaks after winning Week 1. At least the Dolphins have had some close games, while the Texans have gotten blown out almost every week since.

Falcons at Saints (-6): Trevor Siemian is a little bit of an anomaly, in that he has been wholly unimpressive on the field throughout his career, and yet, he actually has a pretty good record (13-12) for a backup quarterback. The Saints are going to lose a bunch of games down the stretch if he's their starting quarterback, but they should be able to get to 6-2 against this trash Falcons team.

Raiders (-2.5) at Giants: The Raiders have gone through some extreme off-field issues this season, initially with Jon Gruden's resignation in disgrace, and now the death of a young woman caused by a drunk-driving Henry Ruggs, who was released by the team on Wednesday.

They responded to the Gruden resignation by convincingly beating the Broncos on the road. As such, I'll bet they respond similarly after this latest devastating news against a bad Giants team.

Patri*ts (-3.5) at Panthers: I forgot how badly the Monday Night Football crew did Sam Darnold dirty by showing him saying that he's "seeing ghosts" during an ugly loss to the Patri*ts in 2019.

Darnold took a huge hit last Sunday against the Falcons, and sat out the rest of the game, so his status isn't certain for Sunday, but he'll likely play.

The Patri*ts' defense should be able to feast on whoever suits up at quarterback for the Panthers, whether that's Darnold, who the Patri*ts own, or P.J. Walker.

Browns at Bengals (-2.5): This week, I'm picking all favorites, so my apologies in advance to anyone who cares about that for some weird reason. I tried to talk myself into the Browns, but I just can't get behind Baker Mayfield. ¯\_(ツ)_/¯

Plus, this will be an interesting test to see if the Bengals can rebound from an upset loss last week to the Jets. I think they will.

MORE: From Eagles lineman to unpaid intern, Barrett Brooks paid his dues and earned it the hard way

Vikings at Ravens (-6): As we noted in the NFC Hierarchy this week, heading into this season, Kirk Cousins was 7-35 against teams that finished the season with a winning record. He's 0-3 this season against teams currently with a winning record. My conclusion here is that Cousins doesn't beat very many good teams, and since the Ravens are a good team, I'll take the Ravens. #Analysis.

Chargers (-2.5) at Eagles: Justin Herbert is a very talented up-and-coming star player, and as such the Chargers are going to be competitive for as long as he's their quarterback. As Super Bowl contenders in 2021, however, the Chargers feel a little fraudulent to me. They only have one good pass rusher, they can't stop the run, the right side of their offensive line is a major problem spot, and they have shaky depth.

When this line opened at Chargers (-1.5), that looked like a steal, and sure enough, that line quickly moved to (-2.5). I'm picking the Chargers because they're better than the Eagles (duh), but I don't love their roster, and their coaching staff is overhyped. An Eagles upset wouldn't surprise me.

Packers at Chiefs (-7.5): In case you haven't been following the "Aaron Rodgers is a pathetic liar" news cycle, you can catch up here. The short version is that Rodgers tested positive for COVID, and was immediately ruled out for the Packers' game against the Chiefs, a clear indication that he was not vaccinated, because it would have been possible for a vaccinated player to return to the team in time for the game.

In August, when he was asked a direct question about whether or not he had been vaccinated, he answered affirmatively, and then added that he was "immunized."

Here’s the video on August 26th when Aaron Rodgers was directly asked if he had been vaccinated pic.twitter.com/kskQDRpWi8

There's a one million percent chance Rodgers acts like a gigantic baby in the aftermath of the widespread criticism he is rightfully facing, because, well, that's what he does.

Cardinals at 49ers (Pk): I love a nice pick 'em game, and I'll take the Cardinals, since they're a much better football team. I'm really not sure how the Cards aren't like four-point favorites here. I guess we're still pretending the Niners are good?

Titans at Rams (-7.5): The Rams have won four straight games, each by at least two scores. The Titans have also won four straight, which included victories over the two 2020 AFC Championship participants (the Bills and Chiefs), plus a comeback road win over their only threat in the division (the Colts). Both teams are hot.

But, Derrick Henry had surgery on his foot, and there is no timetable for his return, if he's able to return at all this season, which makes the Rams a pretty easy pick here.

Bears at Steelers (-6.5): Justin Fields had his best game of the season last week and the Bears still lost by 11. He'll likely face non-stop pressure behind his crap offensive line against this Steelers pass rush.

MORE: Eagles trade with Broncos for CB Kary Vincent Jr. | Indianapolis media is already calling for the Colts to bench Carson Wentz | Week 9 NFL odds: Point spread and total for every game, including Eagles vs. Chargers