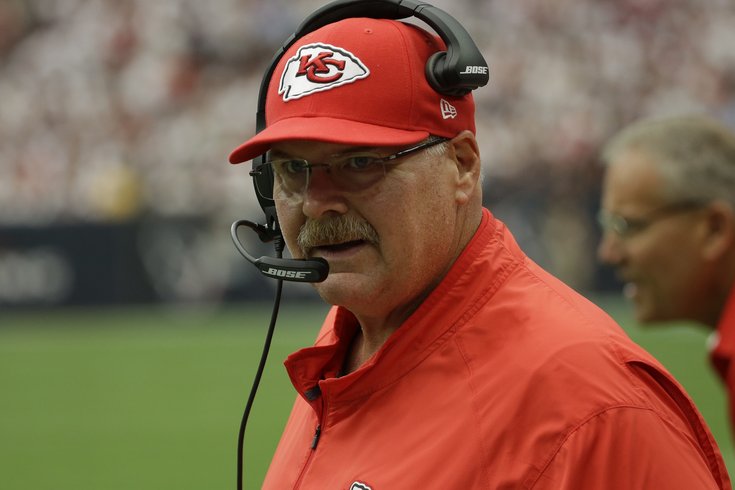 Former Eagles coach Andy Reid seems to be doing better in Kansas City than he replacement in Philadelphia.

A funny thing happened Sunday as a crisp autumn afternoon turned dark across the Delaware Valley. And it wouldn't have have been possible without a little help from some old friends.

With the Philadelphia Eagles' embarrassing 45-17 loss to the Tampa Bay Bucs, Chip Kelly's record since taking over the team in 2013 fell to 24-18. A few hours later, Eagles fans were smacked in the face with a be-careful-what-you-wish-for moment that will likely make Sunday's outcome sting just a little more.

That moment came at the conclusion of the Kansas City Chiefs' 33-3 drubbing of the San Diego Chargers. You see, Andy Reid has coached the same number of games in Kansas City (42) as Kelly has in Philly. Reid's record, however, is now 25-17, one game better than Kelly, the man who replaced him after 14 years as the Eagles' head coach.

If you're wondering if this is the first time Reid has surpassed Kelly in terms of wins and losses, the answer is no. But when you look at how they've arrived at this point, the outlook seems much better for Kelly's predecessor.

Reid jumped out to a 9-0 start his first year in Kansas City, which included a win over his former team in Week 3 -- the only time these coaches have gone head-to-head.

That season, both coaches lost their only playoff game with their current team, but at the end of the season, there was more reason for optimism in Philly then there was in Kansas City, mainly because of how each team performed down the stretch.

That momentum seemed to carry over into the 2014 season for the Eagles, who got out to a 7-2 start before then-starting QB Nick Foles was lost for the season due to injury. They then went 3-4 the rest of the way and failed to make the playoffs. The Chiefs suffered a similar fate. Despite a 2-3 start, Reid's team rattled off five straight wins, including one over the defending champion Seattle Seahawks. But like the Eagles, they struggled late in the season, losing four of their last six and finishing just 9-7, one game behind Kelly's 10-6 Birds.

Through the first 10 games of this season, however, they've looked like two teams heading in opposite directions.

Kansas City is back at .500 after starting the season 1-5 thanks to four-straight wins. The Eagles, meanwhile, have lost three of four and seem to be spinning out of control. Over his last 14 games (dating back to Week 14 of last year), Kelly is 5-9 as a head coach. Over that same span, which includes five games without his team's best player (running back Jamaal Charles), Reid is 7-7.

But it's more than just their win-loss totals. In his two-plus seasons at the helm, Reid's Chiefs have a point differential of plus-256. Kelly's teams have not fared as well; they check in with a plus-134 differential.

Is this where Kelly expected to be 10 games into his third season on the Eagles' sideline?

"No, not at all," he said Monday. "No one is happy about what our record is right now, and all we can do about it is prepare and get ready to play Detroit."

Of course this isn't an apples-to-apples comparison, because Reid had already spent over a decade in charge before being fired while Kelly is only in his third NFL season.

The bad news for Kelly, however, is that the start of his career doesn't exactly match up well when compared to Reid's first three seasons. He may have posted just a 27-21 record over those 48 games -- a number Kelly can reach if they finish 3-3 -- but he also took his team to the playoffs twice, including a win in his first postseason game and an NFC Championship Game appearance in year three. [Yes, that was aided greatly by the fact that they drafted Donovan McNabb and had a franchise quarterback in place almost immediately upon Reid's arrival.]

That began a run of four-straight NFC title games, something that must seem like ancient history to Eagles fans at this point.

Oh, and one more thing, in the three years prior to that disastrous 4-12 season in 2012 that proved to be his last, Reid had a 29-19 record. And following that 8-8 season in 2011, many fans were calling for Reid's ouster. In order to at least match that this season, Kelly would need to finish 5-1 in his last six games.

For now, that seems highly unlikely.