This company will pay an Eagles fan $2,000 to be a Cowboys fan for the rest of the season 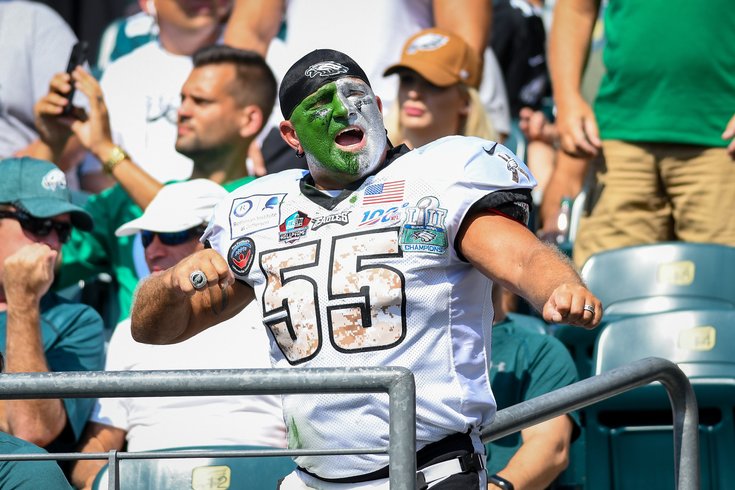 Are Eagles fans getting soft?

An email from a company called CableTV.com came to two PhillyVoice inboxes on Thursday morning, as well as my own.

That's not out of the ordinary, but this one had a better-than-usual pitch: "EAGLES FANS: Is $2,000 worth becoming a Cowboys fan for the rest of football season?"

Would anyone in Philadelphia (or the 'burbs, South Jersey or Delaware) really stoop to being a Cowboys fan for $2,000?

CableTV.com is a website that allows you to compare costs between cable providers. The whole point of this contest is seemingly to make you aware of that fact, and they'll pay you $2,000 to advertise for them, pretty much. Here's what the job entails:

This fall, CableTV.com will pay $2,000 for one (un)lucky NFL fan to betray their team, spend the rest of the season flying their rival’s colors, and brag about it online. Being a superfan of the Philadelphia Eagles is easy, but who can keep that same energy up when it’s a sworn enemy — like the Dallas Cowboys — and do it with pride? Applications opened last week — we will select the most enthusiastic candidate to rally for this challenge come October.

The winner will sport a custom-made jersey and post updates to social media, making their season-long betrayal well-known to friends and family alike.

To be clear, this contest is open to all NFL fans. There are some very intense rivalries out there — Steelers-Ravens, Seahawks-49ers, Chiefs-Chargers, Packers-Bears — but do any of those live up to the Eagles-Cowboys rivalry?

The PhillyVoice staff was somewhat split on this company's offer.

"Gonna have to add at least one more 0 for me," Adam Hermann said. "Maybe two."

"I mean, what constitutes 'becoming a fan' is the question for me," said Kyle Neubeck, who vanished from the conversation after the answer was provided to him.

"I can act," said Matt Mullin, but he spends enough time around the Eagles that this charade would jeopardize his actual job.

And then we have Jimmy Kempski, who maintained his impartiality yet still let his mind wander.

“I can think of a lot of things I could do with $2,000," Kempski said. "I wouldn’t fault anyone for selling their fandom soul for a year’s worth of groceries.”

Hmmm, where the hell is Jimmy spending $38 a week on groceries?

There are two other points to consider. Suppose the Eagles lose to the Packers on "Thursday Night Football" and drop to 1-3? Do you bail on the season for $2,000? Someone will be angry enough to do that on Friday morning, if they lose.

Also, doesn't the Cowboys season technically end when they're no longer in contention? Let's say they go to the Super Bowl and lose to the Chiefs. You would be well within your rights to hate on them immediately after they lose the game, or any time before the Super Bowl if they sputter out.

"The perfect applicant is a die-hard football fan with a stadium-sized personality — we’re not looking for golf clappers and Super Bowl snackers," says the application page, which goes on to ask a bunch of questions about your cable subscription.

Applications are due by Oct. 4. You're encouraged to submit a video if you want to be seriously considered for the role. And if you don't have a social media following to speak of, you're wasting your time. They only want you for the exposure.

I'd say it's only worth $2,000 if you can somehow sabotage the whole thing with well-executed sarcasm. If you can do it in a way that ultimately makes Eagles fans proud, why not?

If there's one thing that sucks worse than the Cowboys, it's cable.