Video of Gabe Ferraro, a New Jersey native, was posted to Twitter and shows him being pelted by rain and fighting the storm's powerful winds 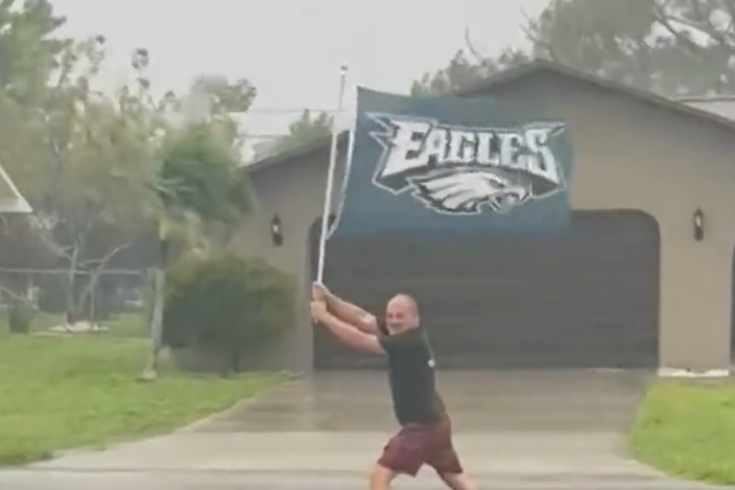 Gabe Ferraro, a New Jersey native who lives in Cape Coral, Florida, appears in a video on Twitter waving an Eagles flag amidst wind and rain from Hurricane Ian on Wednesday.

Amidst the devastation from Hurricane Ian, Cape Coral, Florida, resident Gabe Ferraro braved the storm's high winds to wave a Philadelphia Eagles flag in a video circulating on social media.

Brett T. Holcomb posted the video to Twitter, and it had more than 206,000 views as of Thursday night. The tweet included the message: "This is (my) friend Gabe Ferraro who lives in Cape Coral, FL. He is prepared for Hurricane Ian."

The video shows Ferraro holding a green Eagles flag as he is pelted with rain and braces himself in the strong winds. Ferraro posted a similar video to Facebook with the caption: "Just in case I don't make it. Go birds."

Ferraro used to live in Pennsauken, New Jersey, before moving to Florida, CBS3 reported. He said he lost power for about eight hours Wednesday.

Hurricane Ian made its first landfall on Florida's Gulf Coast on Wednesday as a powerful Category 4 storm. President Joe Biden said the hurricane may be the deadliest in Florida history, with at least nine people reportedly killed as of Thursday evening. Florida Gov. Ron DeSantis declared a state of emergency, and hundreds are being rescued from flooded neighborhoods.