After wreaking havoc in Florida, the storm is expected to move up the East Coast. Severe flooding and high wind gusts are forecast 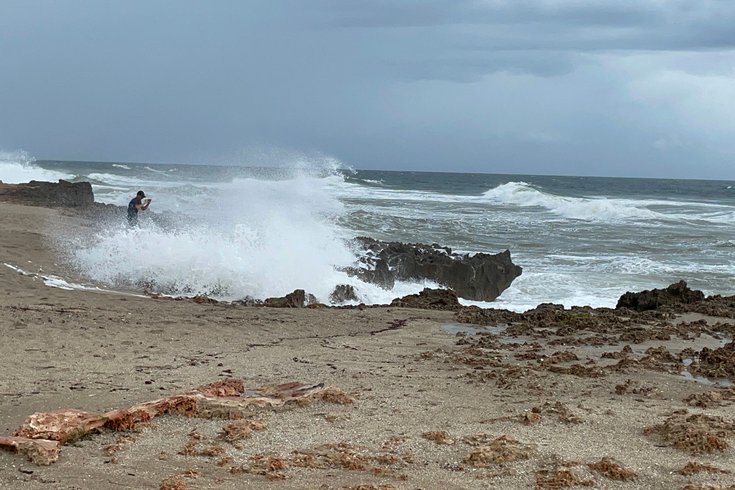 Hurricane Ian made landfall in Florida as a Category 4 storm, leaving 2.4 million residents without power and killing at least 2 people. Pennsylvania rescue workers have been deployed to assist emergency efforts in South Carolina, where the storm is expected to hit Thursday. Above, Ian hits Martin County, Florida.

The Pennsylvania Task Force 1 – a search and rescue team that is aiding the federal emergency response – was deployed to Puerto Rico in the wake of Hurricane Fiona just last week. In South Carolina, they will perform water rescues and relief operations as Hurricane Ian moves off the eastern coast of Florida and progresses into Georgia and the Carolinas.

The storm, which caused severe flooding, left 2.4 million people without power and killed at least two people in Florida, has been downgraded to a tropical storm, according to the National Hurricane Service.

Ian is unlikely to bring significant storm conditions to Pennsylvania, though the National Weather Service forecasts rain from the system will arrive in southern parts of the state, and portions of Delaware and South Jersey, over the weekend.

"Millions of people in the southeastern United States will have a long road ahead of them in terms of response and recovery," said Gov. Tom Wolf. "We are in close contact with emergency management partners in those states and will remain ready to assist however they need us in the weeks and months to come."

Though the tropical storm is unlikely to cause major damage in the tri-state region, Pennsylvania residents are urged to stay alert and be aware of the forecast, which could change as the storm system gets closer over the next few days.

The Pennsylvania Task Force is one of 28 teams that are part of the National Urban Search and Rescue Response System, a federal resource that can be mobilized quickly to respond to emergencies anywhere in the country.

The team is sponsored by the Philadelphia Fire Department. A convoy of buses and trucks loaded with members and supplies headed out from Northeast Philly.

"These are very specialized and very expensive capabilities to maintain, so not every community across the U.S. can maintain these capabilities," Philadelphia Fire Commissioner Adam Thiel told KYW. "We're the sponsoring agency, the Philadelphia Fire Department, and that's essentially the way the system is designed, to surge resources to places that need help."

Here is the latest rainfall forecast for #Ian, issued by the Weather Prediction Center https://t.co/3qxGBAr6Y1 pic.twitter.com/7yAb63IqMa

The team packed boats, floatation devices, rafts, rope and wetsuits in order to reduce the burden on the communities in South Carolina that will be impacted by the storm. The equipment will allow the team to be self-sustainable for at least 72 hours in devastating weather conditions.

Wolf said the state also is working with the Pennsylvania Emergency Management System to assess the federal assistance system for requests for more assistance. The Emergency Management Assistance Compact is an agreement with all 50 states, as well as Washington, D.C., Puerto Rico, Guam, the U.S. Virgin Islands and the Northern Mariana Islands, to share equipment and services during disasters.

Ian approached the Gulf Coast of Florida on Tuesday night. It made landfall as a Category 4 storm and devastated large portions of the state on Wednesday. Parts of Fort Myers, along the west coast of Florida, were up to four feet under water, local authorities said on Twitter.

Florida Gov. Ron DeSantis said Ian will go down as one of the worst storms to hit the state, after the Labor Day Hurricane in 1935, Hurricane Andrew in 1992 and Hurricane Michael in 2018, The New York Times reported.

Part of the state's power system will need to be rebuilt, rather than restored, NBC News reported.

The American Red Cross is collecting donations to help people recover from the impacts of the tropical storm. Any donation to the organization can be earmarked for Ian. The Red Cross sent blood to Florida on Wednesday in advance of Hurricane Ian, and has helped victims and evacuees in emergency shelters across the state throughout the week.