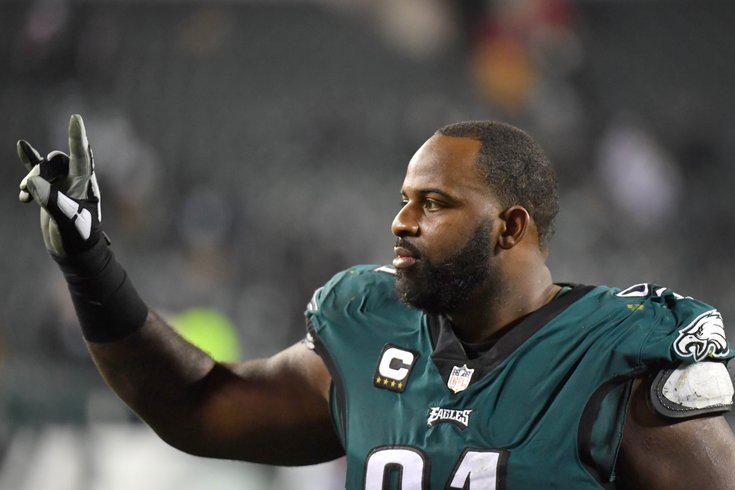 So apparently there are people out there who think Fletcher Cox's $14 million contract was a good move.

On Tuesday, we graded the Philadelphia Eagles' free agency. Today, we'll take a peek at how some of the national folks graded what the Birds have done so far this offseason.

Of the four teams in the division, the most impressive (and, really, the only) splash exists in Philadelphia. Their decision to award Reddick a three-year deal can only be viewed in the moment as a great idea, especially given the compensation vs. previous production formula, with Reddick still being one of the better pass rushers in the NFL. He'll join a defense that was able to release but then re-sign team legend Fletcher Cox to a smaller contract for cap reasons (well played, Mr. Roseman) and with Anthony Harris retained on a one-year deal -- keeping a starting safety in tow -- to make for a still solid defense in combination with Josh Sweat and Brandon Graham.

The offense gets Zach Pascal and Boston Scott on paper to aid Jalen Hurts, and it just feels like while the Eagles aren't off to their usually explosive start to free agency, they're currently winning the race of the four one-legged horses.

#JimmySays: Everything written here seems to be positive, but the Eagles still ended up with a C. Whatever.

Let's get something clear about Cox's contract. There is absolutely nothing cheap about it, and it was not "well played" by anybody. He's already going to count on the 2023 cap for $15,359,292 in dead money, and the $14 million he'll make in 2022 is $4 million more than any other interior defensive linemen has made so far on the open market this offseason on an average annual value basis.

The Eagles could have just let Cox walk and signed a mid-range DT to back up Javon Hargrave and Milton Williams.

There’s been some ridicule of Howie Roseman on social media so far during Philly’s offseason, but there shouldn’t be. The Eagles haven’t lost anybody of significance. They even cut and then re-signed Fletcher Cox.

#JimmySays: Oh my God I'm going to develop a brain aneurism with all this "they cut and re-signed Fletcher Cox" praise. He's 31, he's clearly in decline, he's coming off the worst season of his career in 2021 after a down season in 2020, he doesn't like the scheme, and they paid him $14 million. They took a huge penalty to get rid of one terrible contract of his and then just gave him a new terrible contract. There's nothing wrong with letting guys walk instead of overpaying them.

The Philadelphia Eagles kept their house in order during free agency and picked up a top-tier free agent in edge-rusher Haason Reddick who can immediately help their defense.

Sobleski thinks general manager Howie Roseman will appropriately save the rest of his action for the draft.

"The Eagles haven't made many offseason moves because they didn't need to," he wrote. "The team is already ahead of the curve with quarterback Jalen Hurts' development and making the postseason in Nick Sirianni's first season as a head coach. Plus, the Eagles have three first-round picks in this year's draft."

Sobleski also credited the Eagles for not allowing their key role players to sign elsewhere.

"The Eagles brought back safety Anthony Harris, running back Boston Scott, defensive end Derek Barnett and defensive tackle Fletcher Cox (after releasing him)," he said. "The team also brought in Reddick and wide receiver Zach Pascal. Reddick should give them a consistent pass-rusher, while Pascal's familiarity with Sirianni's offensive scheme will only help Philadelphia's passing attack."

With Reddick, who's logged double-digit sacks in back-to-back seasons, joining Cox, Javon Hargrave and Josh Sweat, Philadelphia has one of the league's best defensive fronts.

#JimmySays: It's news to me that the Eagles didn't need to make moves in free agency, and that they're "ahead of the curve" with Hurts' development. Yikes.

The Eagles' lone significant addition thus far is edge rusher Haason Reddick, who signed a three-year, $45 million contract to bolster their pass rush. Reddick is a former first-round draft pick who was miscast as an off-ball linebacker early in his career before being reborn on the edge — where he always belonged. At just 6-foot-1 and a listed 235 pounds, Reddick is always going to be an undersized edge defender, but that gives him speed and quickness that is hard to match up with. He recorded 100 pressures over the past two seasons and helps replace some of the heat Philadelphia's defensive line has lost in recent years.

Retaining depth players, including tight end Richard Rodgers and offensive lineman Nate Herbig, doesn’t hurt, and the Eagles have also made late moves to re-sign Boston Scott in the backfield and Anthony Harris at safety. Overall, this is a team that has largely kept its war chest intact.

Cutting Fletcher Cox was a move made inevitable by his massive salary and decline in play recently, but the team brought him back on a one-year deal. After a run in which he was arguably the best interior defender in the NFL after Aaron Donald, Cox has seen his PFF grade drop from above 90.0 to 74.1 in 2020 and then 68.7 in 2021. He notched fewer pressures in those two seasons combined than in 2018 at his peak.

Philadelphia is also saying goodbye to a good portion of its defensive snaps from last season as of now, so more replacements should be on the way.

The Eagles had to work some good cap magic with extended GM Howie Roseman and still got one of the most impactful free agents in former Temple star Reddick. They also moved on from fading players.

#JimmySays: What fading players did they move on from? They kept Cox, Barnett, and Harris!