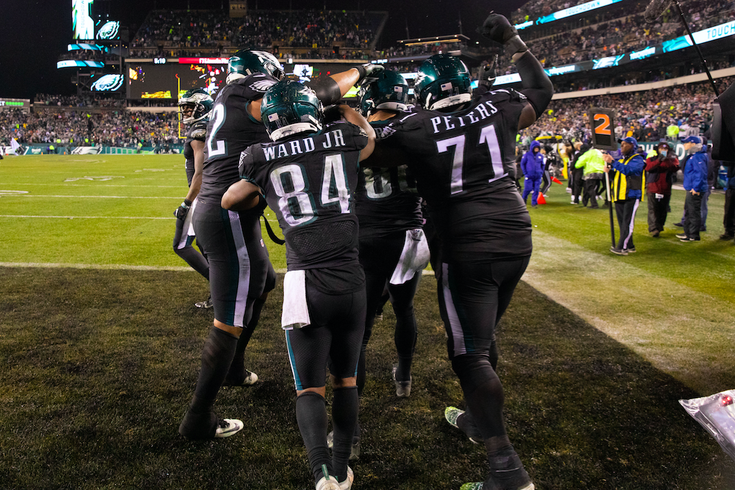 The Philadelphia Eagles braved through the rain for comeback 23-17 win over the New York Giants on "Monday Night Football" on Dec. 9, 2019.

In a game they desperately needed, the Philadelphia Eagles squeaked past the New York Giants in overtime on Monday Night Football, ending their three-game skid and pulling into a 6-7 tie with Dallas for the NFC East lead.

You know those terrible primetime matchups you see as an Eagles fan and go, "Wow, I don't care about this crappy game at all?" For the rest of the country, this was one of those putrid games. The rain put an emphasis on it. Hell, we almost saw backup quarterback Josh McCown reprise his magic as a wide receiver.

Credit to Carson Wentz, the second-half defense and the Eagles' preseason offense for staging the comeback against Eli Manning. Philadelphia was teetering on the edge of a total laughingstock down 17-3 at halftime.

When you have former players coming out of the woodwork to roast the Eagles, you know it's pretty bad.

RELATED: Handing out 10 awards from the Eagles-Giants game

Ballhawk cornerback Asante Samuel, who's been fairly quiet in his retirement, chimed in during the game.

"Put me in the second half I can get 2 INTs off of Eli and get us rite back in the game. Howie!!!!! #pick6," Samuel wrote on Twitter, and then deleted it when the Eagles came back and won.

You know what.... I'll make the Eagles receiving core right now. And I'm currently at a bar at this present moment. 🥃

And then by Monday morning, you had Eagles mole Orlando Scandrick again ripping them for a "laughable" and "pitiful" win.

"It was laughable. That was pitiful. You're not going to beat nobody except the New York Giants with that. Philly is struggling."

It may not have been pretty — and injuries to Alshon Jefferey and Lane Johnson are not good — but the Eagles still remain in control of their destiny. At least they still have Jeremy Maclin in their corner, not taking the bait to rip the team.

Lol retired boss! Ward and JJ will continue to get better with reps. nelly and AJ will be back soon enough. Eagles winning the division! All you gotta do is get in and anything can happen! 🦅 https://t.co/PIg2ctO2AV