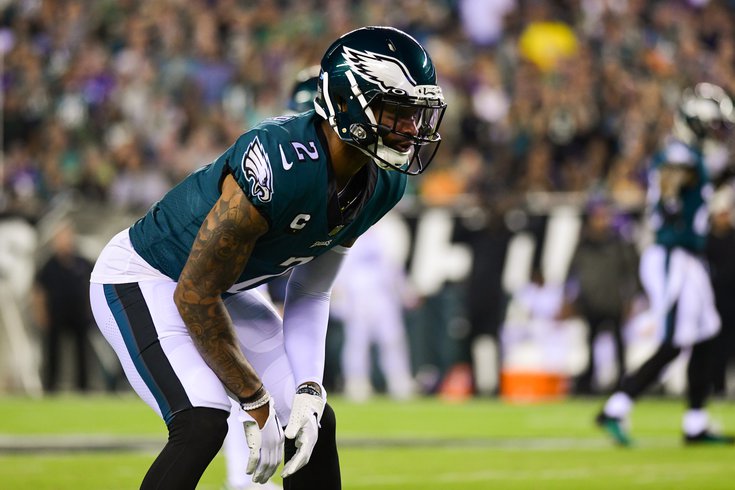 Eagles CB Darius Slay during the Monday night game against the Vikings on September 19, 2022.

UPDATE [2:45 p.m.]– The Eagles left the tunnel for the second half and Darius Slay and Jordan Mailata, both still in pads, came back out with them.

The Eagles got the ball to begin the half, but Jack Driscoll remained in Mailata's spot on the offensive line while he was seen working with a trainer on the sideline testing out the shoulder.

Slay didn't go in to start the Eagles' first defensive series of the half either. Zech McPhearson went back in at the corner spot.

One of the biggest factors working in the Eagles' favor going into this season was a fully healthy roster, but Sunday's game against the Jaguars brought some concerning sites early on.

Pro Bowl cornerback and defensive captain Darius Slay went to the medical tent and then the locker room after the game's opening drive.

Then, after Jalen Hurts' pass to Zach Pascal was tipped and returned for a pick-six on the next series, offensive tackle Jordan Mailata was seen jogging up the sideline and to the locker room.

Per the team, Slay has a forearm injury and is questionable to return. Mailata hurt his shoulder and is also questionable.

Forearm injury for Slay, shoulder for Mailata. Both questionable to return.

The potential losses stand as huge blows to the Eagles' secondary and offensive line, especially in a 14-0 hole early with the rain and wind working against them.

Zech McPhearson filled in for Slay at corner and Jack Driscoll subbed in at Mailata's spot on the line.

Darius Slay is out right now for this next Jags drive. Zech McPhearson is in.

Jack Driscoll in for him.