Eagles' Chip Kelly: We want Sam Bradford to be our long-term QB 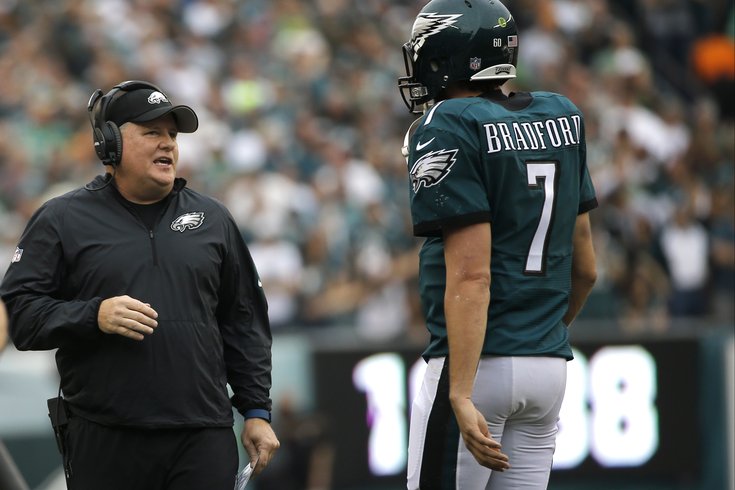 Quarterback Sam Bradford may not be going anywhere for a while, according to Philadelphia Eagles head coach Chip Kelly.

“We’ve always wanted Sam here [long term]," Kelly said Monday, following his team's 23-20 win over the Buffalo Bills. "We wouldn’t have traded for him if we thought he was only going to be here for a year.”

In the offseason, the Eagles traded Nick Foles, who was 14-4 during Kelly's first two seasons at the helm, and a second-round pick to the Rams for Bradford, who is playing in the final year of his rookie contract. It's one thing for a coach to endorse his players, but Kelly isn't just the coach, he's also the general manager, so his words carry even more weight in the halls of the NovaCare Complex.

Kelly's reasons for wanting to stick with Bradford going forward aren't singularly focused, however. It's not just because there aren't many other options out there. And it's not just because the former No. 1 overall pick is now 5-1 in the last six games that he's started and finished for the Eagles. Nor is it the fact that Bradford has shown improvement on a week-to-week basis. Instead, it's a combination of those things.

And in Kelly's mind, there's only one way to go from a serviceable starter to a franchise quarterback -- experience. More specifically, experience in your current system.

“I just think Sam, as a whole, has progressed as the season’s gone on," he said. "I think — not I think, I know — it takes a long while to play quarterback in this league. There are so many different things you have to get into. When we got Sam, we knew like with any quarterback it was going to take time.

Still, despite the fact that he's still relatively new to Kelly's system, there have been signs of growth from Bradford.

"I’ve just seen improvement from Sam on a weekly basis that gets you excited about him," Kelly added. "I thought he threw the ball extremely well [Sunday]. We could have helped him a little better; I thought there were too many drops that really would have extended a lot of things for us. I think Sam has improved in all aspects.”

And the numbers support Kelly's observations.

In his last four games, which includes the loss to Miami when he was knocked out with a concussion and shoulder injury, Bradford has a 97.5 passer rating, 65.85 completion percentage, five touchdowns and one interception. By comparison, here's a look at his season broken down into three segments in order to show his improvement:

As you can see, his interceptions are down, while his completion percentage and yards per attempt are both up. And it's these kinds of improvements that have Kelly excited by the possibility of Bradford being here for the foreseeable future.

The coach also believes that his quarterback's growing familiarity with the system -- coupled with his recent success -- has boosted Bradford's confidence. And in turn, that confidence has allowed him to be even better on Sundays. Kelly said, "confidence" was the main difference between the Eagles team the walked off the field on Thanksgiving after losing to the Lions and the one that walked out of the Linc on Sunday.

And Bradford is no exception.

The Eagles could try to sign the 28-year-old to a long-term deal, assuming they feel confident in what they've seen out of him so far this season. They would also have the opportunity to place the franchise tag on him if they wanted another season just to be sure. However, that would leave them in the same position -- with an uncertain future at the most important position in sports -- at the end of next season.

For now, at least, it seems like Kelly is ready to tie his future, both as coach and GM, to Bradford.