Lane Johnson believes his best football is still ahead

"I feel like my best football is coming. I feel like at this age, the next two years will be my prime." 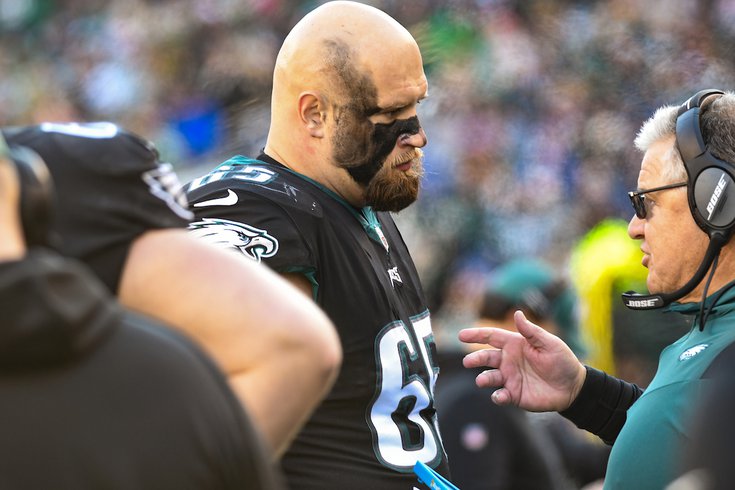 Tackle Lane Johnson and offensive line coach Jeff Stoutland on the sideline during the Eagles' home game against the Giants back on Dec. 26, 2021.

Lane Johnson is going into year 10 and feels that his best football is still ahead of him.

"I can say now, I'm definitely a lot bigger and stronger than what I was during the Super Bowl year," Johnson said Sunday ahead of the Eagles' open practice at Lincoln Financial Field. "I feel like my best football is coming. I feel like at this age, the next two years will be my prime."

If there's more to what he's done already, then buckle up.

Johnson has been a fixture of the Eagles' offensive line for the past nine seasons, and in the last several, has earned a near indisputable reputation as one of the best right tackles in the NFL.

He's made the Pro Bowl three times, made first-team All-Pro and won the Super Bowl in 2017, and earned second-team All-Pro honors in 2021 anchoring one of the best lines in football, which in turn, resulted in one of its best rushing attacks – and this was all while he was rebounding from a season-ending ankle injury in 2020 and addressing anxiety and depression.

Johnson, now 32, was asked Sunday which out of his nine seasons so far may have been his best, which led to the response that he's still got more to give.

However, he did recognize changes in speed and strength over the years, which he said were partially influenced by his history with his ankle.

"It's just different," Johnson said. "Whatever I may have lost in speed, I feel like I've made up in power as I've gotten older. But, really, I feel good, much better than I did last year.

"When I say speed, I feel like I lost some last year because I was on one ankle, but right now I feel fast. I'm running 330 [lbs.]. I feel good. Just trying to keep that rolling. Early in my career, I played around 315-320 and now, I guess it's easier to keep on weight as you get older, but as long as it's not slowing me down too much, I feel good, I feel ready. Practices have been going good and we'll have another good practice tonight at the Linc."

What will also be different heading into this season is who's on his left at guard.

With Brandon Brooks retired, Isaac Seumalo is making the switch over to the right side of the line. It's a shift, but as a fellow veteran of the past six years, going on seven years, it's far from a radical one.

Johnson said Seumalo communicates well, plays at a fast pace, and is "a very quick individual. So he makes life for me pretty easy, just like Brooks did."

"Really nothing surprises me about Isaac," Johnson said. "I've seen him for the past six, seven years. He's one of the more talented guys that's probably ever been here as far as a guy who's played every position but center – both guards, both tackle positions – It's pretty rare you can find somebody who can do that."

Plus, Seumalo's also looking for better after a Lisfranc injury ended his 2021 in September.

"I know he's ready to have a bounce-back year. He was having a tremendous year last before the injury, and I'm just here to work with him and be the best right side we can be."

Isaac Seumalo and @LaneJohnson65 are ready to put in the work.
#FlyEaglesFly pic.twitter.com/SVSX8or5H3