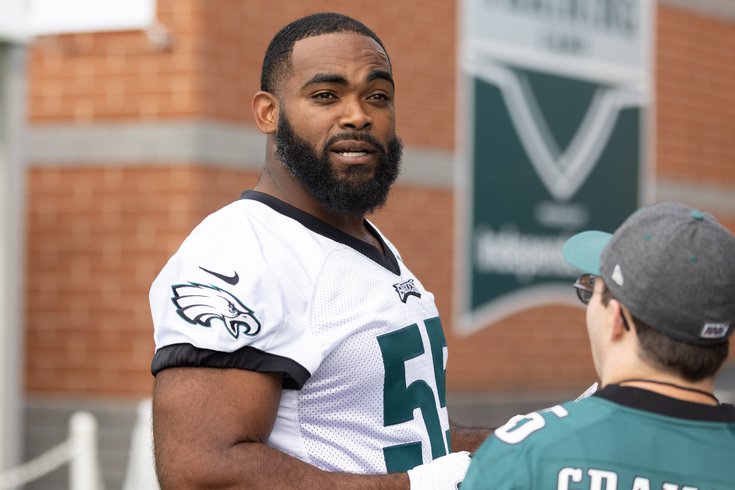 If all goes as planned, it'll have been 357 days between games for Brandon Graham when he takes the field in Week 1. A September Achilles tear in 2021 prematurely ended Graham's season, just as the team captain was coming off his first ever Pro Bowl campaign. Graham's comeback will be in his hometown of Detroit when the Eagles head to Ford Field to square off with the Lions on September 11.

Graham, before his Super Bowl heroics and before he was an All-American at Michigan, was just a student at Crocket High School. Though the school shut its doors in 2012, the old building was just a 10-minute drive from Ford Field. It's a double-whammy that excites Graham: a trying rehab process that now has him ready to play in his 13th NFL season and a "road trip" that is anything but.

"It's so funny how things work out the way they do," Graham said to reporters on Monday about the trek home for Week 1. "You look up: I play Detroit coming off injury and I'm going to be able to play in that game. I didn't get to play last year when we played in Detroit [Week 8 on Halloween]. To start off with the first one, it's going to be something special playing in front of that home crowd coming back from an Achilles injury."

Graham has played in Detroit with the Birds three times in his career. The first time was a Week 2 win in the 2010 season. It was just the second game of his entire career and he recorded his first sack on Lions quarterback Shaun Hill. The second was on Thanksgiving 2015 when Detroit absolutely embarrassed the Birds while the fan base was carving up turkeys. Graham recorded three tackles, including one tackle for loss, in the 45-14 drubbing. The most recent matchup was in Week 4 of the 2016 season. The undefeated Eagles lost to the Lions 24-23, as Graham's now-teammate Darius Slay recorded the game-sealing interception for Detroit. Graham had six tackles (two tackles for loss) on the day.

Graham is ready for the homecoming. It'll certainly be an emotional game for him both because of the locale and what he's undergone over the last year. Per usual, however, Graham was all smiles and joking about the trip to Michigan.

"It's going to be a lot of people," Graham said about how many friends and family will be in the crowd at Ford Field. "Just know that I don't got no tickets this year. Y'all better go on Ticketmaster because everybody and their mama definitely hit me up.

"So I'm excited for that game. It's just cool the support that I get from Michigan, people at home."

The Duce is Loose

The Lions are already in the spotlight this summer. Detroit is the team featured in this year's version of "Hard Knocks" on HBO. A certain former Eagles running back and coach has gotten a share of the spotlight: Duce Staley, who is now an assistant head coach and running backs coach on Dan Campbell's staff.

"Duce looked good. Duce is being Duce. I miss his voice," Graham said of Staley, who played for the Eagles from 1997 to 2003 and coached in Philly from 2011 to 2020. Staley rose from special teams quality control coach in 2011 under Andy Reid to RB coach in 2013 under Chip Kelly and assistant head coach (while continuing RB duties) in 2018 under Doug Pederson. Just Graham and Jason Kelce remain as figures who are in their fourth era of Eagles football.

"I appreciate him so much because he definitely helped me during some tough times, just keeping it positive," Graham said. The defensive end noticeably struggled early in his career, worked hard to shed the "bust" label, and became the guy who made the play in the Super Bowl.

"He don't have that fake energy," Graham continued. "He's like me: happy and ready to go."