What they're saying: Is Jalen Hurts' future secure after Eagles turn their season around?

Plus, why Nick Sirianni deserves the lion's share of the credit and what makes this playoff berth so special 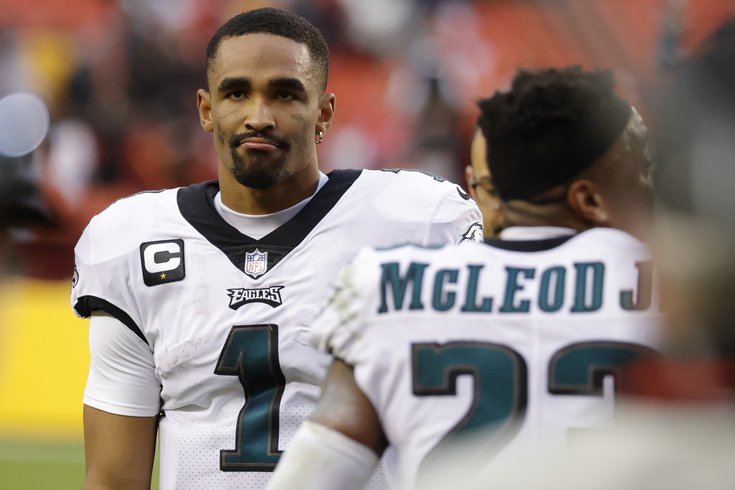 Philadelphia Eagles quarterback Jalen Hurts walks off the field with Eagles safety Rodney McLeod after their win over the Washington Football Team at FedExField.

By now, you probably already know that the Eagles are headed to the playoffs after missing out last year following one of the worst seasons in franchise history, one that led to the firing of a Super Bowl-winning coach and the trading away of a quarterback they not only moved up to draft but had also given extension to. And with a win over the Cowboys on Saturday, they could secure their first 10-win season since they won the Super Bowl in 2017-18.

Needless to say, it's a turnaround not many saw coming under a first-year head coach in Nick Sirianni and a 23-year-old quarterback in Jalen Hurts, especially after the team started the season with a 2-5 record.

But, after going 7-2 over their next nine games, the Birds have clinched a wild card spot and can now rest their starters in Week 18 with nothing left to play for — yes, they can technically move up to the sixth seed with a win and some other dominoes falling their way, but with so many moving parts in terms of seeding, a win or loss wouldn't guarantee a specific opponent either way.

So now that the 2020 regular season is pretty much in the books for the Eagles, assuming Hurts and others get the week off, what have we learned about this team? Its coach? And, most importantly, its quarterback? There will be plenty of time to break down Hurts' season in the coming days and weeks, but some are already writing that he's done enough to prove he deserves to be the guy going forward. And that's where we'll start today's edition of What They're Saying...

Hurts the future at QB?

Over at NJ.com, Chris Franklin wrote about why he believes Hurts should be the guy not just in 2022, but beyond. Given the improvement we've already seen from Hurts — and there's still plenty left for him to improve on moving forward — there's no reason to believe he won't continue to get better. And that combined with his already proven leadership and playmaking abilities make for a potentially bright future for the young QB.

Here's more from Franklin, who acknowledges that Hurts is far from complete, but also thinks that with the right coaching and development the former Heisman runner-up can lead this team deep into the postseason...

Now, the task for the Eagles is to continue to help Hurts with his development and let the chemistry grow between the quarterback and the current group of receivers that include DeVonta Smith, Quez Watkins, Jalen Reagor, and tight end Dallas Goedert. If the Eagles do not have what they believe to be the necessary pieces, they have to go out and maximize Hurts’ talent before he receives an extension that alters the team’s salary cap and their future plans.

The Eagles have a unique talent that they should move forward with for at least the next two or three years. If they do, they very well could find themselves not just in the playoffs but potentially making a deep run. ...

Now, the task for the Eagles is to continue to help Hurts with his development and let the chemistry grow between the quarterback and the current group of receivers that include DeVonta Smith, Quez Watkins, Jalen Reagor, and tight end Dallas Goedert. If the Eagles do not have what they believe to be the necessary pieces, they have to go out and maximize Hurts’ talent before he receives an extension that alters the team’s salary cap and their future plans.

The Eagles have a unique talent that they should move forward with for at least the next two or three years. If they do, they very well could find themselves not just in the playoffs but potentially making a deep run.  [nj.com]

Credit to the coach

The Athletic's Mike Sando covered a lot of ground in his Week 17 recap, including mentioning the Eagles (again) as a possible destination for Russell Wilson, should he be moved in the offseason. But most of Sando's writing on the Eagles complimented Sirianni and his team for making that mid-season with to be a running team, which is a big part of the reason they're in the playoffs.

In fact, Sando had a lot of praise for the rookie head coach, who just last week was getting some consideration for NFL Coach of the Year...

The Eagles get credit for overhauling their scheme from the NFL’s pass-heaviest to its run-heaviest on the fly to accommodate quarterback Jalen Hurts. It’s one of the most dramatic in-season stylistic shifts in memory. It’s the sort of thing people might expect Bill Belichick to pull off, not a rookie coach like the Eagles’ Nick Sirianni.

If you’re looking for more clues that Philly is a well-coached team, consider the shockingly detailed answer Hurts delivered last week when explaining why he did not throw to open tight end Dallas Goedert against the Giants. Basically, Hurts went through his reads exactly as he was coached to do them, even though it meant failing to notice the defense had blown its assignment on Goedert. In other words, Hurts was playing exactly the way the Eagles had coached him to play, right down to the last detail. Not only that, Hurts understood it all, and could explain it in terms the general public could understand.

#Eagles QB Jalen Hurts just provided one of his most descriptive answers of the year when asked by @Jeff_McLane about missing a wide-open Dallas Goedert in the end zone.

At the front-office level, Philly recalibrated a roster that had gotten too old as the team tried to keep open its post-2017 Super Bowl window. This is most noticeable on offense, where the Eagles’ starters are younger on average at every position. Philly still has veterans at key positions, including right tackle and center, but the mix is more sustainable. The Eagles now have a shot at building around Hurts.  [theathletic.com]

A playoff berth worth celebrating

It wasn't just an in-season turnaround, it was a year-over-year change for the Eagles, who went from four to potentially 10 wins in the course of a year (albeit with one more game on the slate). That's impressive, no matter how easy your second-half schedule was.

Over at NBC Sports Philadelphia, Roob took a look at what makes this playoff berth so special for the Birds...

The Eagles are a playoff team, and they don’t have to apologize to anybody for it.

If you don’t think what the Eagles have accomplished is special, consider this: Since 1990, when the NFL expanded to 12 playoff teams, 156 teams have been 2-5 after seven games.

The Eagles are the 9th out of those 156 teams to reach the postseason.

And consider this: The Vegas over-under for the Eagles was 6 ½ games. They’re sitting at nine with a game to go.

And consider this: The Eagles’ five-game improvement – from four wins last year to nine wins so far this year – is 3rd-biggest in the history of a franchise that dates back 88 years.

What this team has achieved is rare, and it shows us all what’s possible when you have a coach who knows how to get players to believe in him and believe in themselves.  [nbcsports.com]

Talk about a turnaround

Martin Frank of the Delaware News Journal took it one step further, ranking the nine best second-half turnarounds in Eagles history. And, unsurprisingly, this year is at the top of the list...

Comment: Sirianni seemed overmatched when he got the job last January, and that kept going into what was called a "transition period" with Hurts as the quarterback. And after the 33-22 loss to the Raiders on Oct. 24, in which Fletcher Cox was revolting against defensive coordinator Jonathan Gannon, it was fair to wonder if Sirianni and his staff would get a second season.

Not only will Sirianni be back, but the Eagles will have three first-round picks to keep building for the future. It's a future that seems much brighter than it looked in October, no matter how long the Eagles last in the playoffs.  [delawareonline.com]

Which others came close? You'll have to go check that out for yourself.

Getting a bit of help

Sometimes it's better to be lucky than good, but this year, the Eagles were a bit of both. In several cases, like facing a depleted Washington team back in Week 15, COVID was the culprit. And in some, it was actually unvaccinated players specifically who helped the Eagles. In addition to the Bucs, the Eagles' most likely first-round opponent, being without wideout Antonio Brown after he stormed off the field on Sunday, a pair of unvaxxed quarterbacks are also aiding the Eagles. Here's more from Marcus Hayes...

Wentz and Cousins are unvaccinated. Both tested positive for COVID-19 last week (unvaccinated people remain more likely to contract the virus). Wentz popped on Monday, so he was cleared Saturday. Cousins popped on Friday, so he missed Sunday’s game.

Cousins’ absence ensured his team’s loss at Green Bay on Sunday night. That loss served as the final tumbler that unlocked the playoffs for the Eagles. They won at Washington, and the 49ers had beaten the Texans.

Wentz’s abysmal play led the Colts, a seven-point favorite, to a three-point loss against the visiting Raiders. A win would have clinched the Colts a wild-card berth. Instead, the loss put the Colts in peril of missing the playoffs entirely — which the Eagles would love.

If the Colts do make the playoffs their draft slot would be, at best, 21st. If they don’t make the playoffs that pick could jump into the teens, depending on other teams’ outcomes Sunday and strength-of-schedule comparisons as the tiebreaker.  [inquirer.com]

And finally, we make one quick stop back at The Athletic, where Sheil Kapadia ranked the 16 teams still in playoff contention in terms of their likelihood of winning the Super Bowl. Unsurprisingly, the Eagles were near the bottom...

They’ve overachieved this season and somehow clinched a playoff berth before Week 18. The Eagles completely changed their identity after a 2-5 start, shifting to a run-first approach with Jalen Hurts, and it’s worked well. Under first-year head coach Nick Sirianni, the offense ranks 10th in EPA per drive. That’s slightly ahead of teams like the 49ers, Cardinals and Cowboys. It’s also a huge jump from last year when they finished 27th.

The defense, meanwhile, has played well against bad quarterbacks and been overmatched against good quarterbacks.

The Eagles overall have consistently been better than the bad teams and not quite as good as the good teams. They’re 0-6 against teams that are currently projected to be in the playoffs.

The Eagles have a great offensive line, a quarterback who is a dual threat and a couple nice weapons in DeVonta Smith and Dallas Goedert. Given their strengths on the lines of scrimmage, they’ll have a chance to pull off an upset in the first round. But anything beyond that would be a surprise.  [theathletic.com]