The Eagles need to use all caution with their MVP candidate QB, writes columnist Eytan Shander 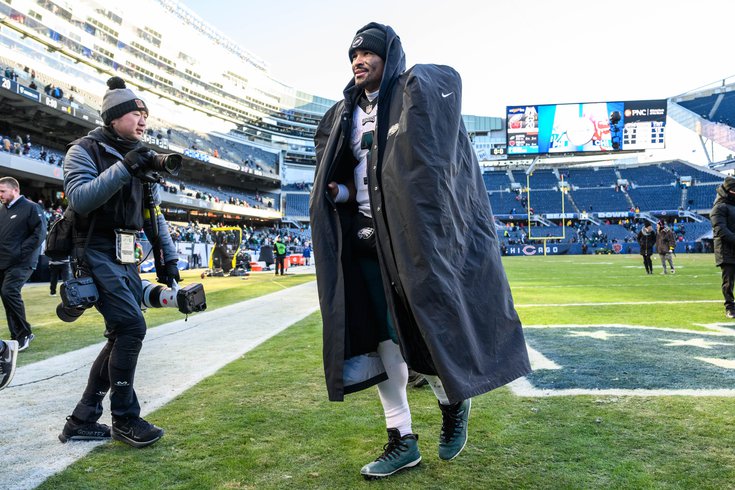 Now is the time to harken back to what will go down as the most famous question ever asked by any Philadelphia athlete ever.

Nothing has changed with the Philadelphia Eagles, and nothing will change come the start of the playoffs. Whether we see Jalen Hurts again in the regular season is still up for debate, but two things are not — how we got here and what happens next.

Bottom line is once we understand those two things, the good news remains. The Philadelphia Eagles are fine and are still the leading candidate to represent the NFC in the Super Bowl. We will get to that in a minute, but first how we got here.

If Nick Sirianni did not hold back Miles Sanders in the first half, limiting his carries against one of the worst rush defenses in the NFL, and Jalen Hurts still was injured, then okay. We know there is risk and that comes with a QB so dangerous with his legs that you must design plays for him to run. Unfortunately, that wasn’t the case. While it was not a direct A-to-B correlation, it’s impossible to sweep under any rug while ignoring that a top RB in the league was denied chances to touch the ball.

That was inexexcusable and Sirianni has been rightfully dragged for such an obvious oversight.

Or maybe it wasn’t such an obvious decision and maybe it wasn’t an oversight. Whether Sanders got in trouble or is being punished for playing in a contract year, it’s hard to think such a talented and successful head coach in his early tenure would willingly deny his best back the football.

But such is life.

Nick Sirianni will never make that mistake again. How could he? From columnists to radio hosts, Sirianni was ripped to shreds. The only thing dumber than ignoring Sanders would be starting a QB with a sprained throwing shoulder when your team only needs one win to clinch home field advantage.

There is simply no way Hurts can play this week and by doing so the Eagles might be a little luckier than we gave credit. I can’t imagine there is any medical professional who works directly with athletes and shoulders that thinks it’s a sound idea to send Hurts back out this weekend in Dallas. The only thing that was impacted by Siranni and Hurts' insane hinting towards the possibility of the latter playing was the spread.

So Sirianni — be it neglect, punishment, or orders from above — made a major mistake in ignoring Miles Sanders. The team isn’t going to see Hurts for most likely the next two weeks. So, what happens then?

The season will most likely be wrapped up. New Orleans has one of the worst coaches in the NFL and isn’t talented enough on offense to beat Philadelphia’s defense. Then it's going to be a meaningless game against the Giants where Hurts either sits or gets some early exposure to knock off any rust. Either way, the Eagles will be fine.

The one thing that cannot happen — this is big — is what happens when Hurts actually returns to the field. Turning him into a pocket passer to avoid contact is the wrong move. Not calling any or as many designed runs to avoid contact is the wrong move. Instead, the Eagles are going to keep doing the same thing they did before Hurts went down — sans the whole ignoring Sanders thing. Let Hurts do his thing and just sit back and facilitate it.

Hurts and the team are at its best when he’s just playing football. Picking his spots to run or hand off, going through progressions with time to throw, and executing both in the air and on the ground. It’s why he’s having one of the more impressive years we have seen since Patrick Mahomes threw for 50 TDs.

The Eagles face a Cowboys team this weekend with a QB who is much closer to Gardner Minshew than Hurts. That’s not some big rip on Dak Prescott, it’s just what the NFL is. There are four to five guys at most each year that are just head and shoulders above everyone else. Quarterbacks that are doing insane things to control games and winning those games as a result. Having a defense, skilled players, depth etc etc etc always helps, but this is about the CEO of a team — their quarterback.

The reality is that most talent gaps in the NFL aren’t that wide. It’s a truly stringent process to get inside this league and unlike others, most guys coming off the bench aren’t just placeholders. Everyone can play. It’s why you see upsets even with banged up teams happening each week. We’ve seen Minshew come in last year and the offense didn’t miss a beat. They will certainly miss Hurts but not to the extent that warrants panic in the street.

Prescott is probably on the higher side of this big pile of average. The position basically reflects the league. You have your Eagles and Chiefs, right down to the Texans. Prescott is like the Giants. Is he as good as Hurts or Mahomes? Laughably not. Is he as bad as Baker Mayfield or Davis Mills? No. He’s just a better than average QB – which in this league is still average.

The harsh reality is there won’t be much of a discernable gap between Prescott and Minshew on the field come Saturday. There will always be a gap between the majority of the league and Hurts. Both can co-exist with the Eagles still being a good football team.

They most likely win 9-10 games with Minshew as their full-time starter and we aren’t talking about an MVP season — nor a trip to the Super Bowl. That is the discernible difference between Hurts and pretty much everyone else except for maybe two guys in this league.

Last thing to chomp on before you start your holiday feasting. Look at the rest of the QB situations around the NFC and tell me you are still concerned about the Eagles so long as Hurts is healthy.

Prescott and Kirk Cousins have losing records in the playoffs. The Niners have a rookie QB at the helm. The Lions will have Jared Goff on the road. Tom Brady is going through the worst personal year of his life and it’s showing on the field. Daniel Jones, Taylor Heinicke, and anyone else who may sneak in.

In a league that is so heavy on QB play — where you can win with average only if he doesn’t make mistakes, dominate with a legend, or lose with a loser — Hurts stands above everyone else. He just needs to be able to stand up on his own when it’s all said and done.