The Eagles' next head coach would ideally be a 'quarterback guru' 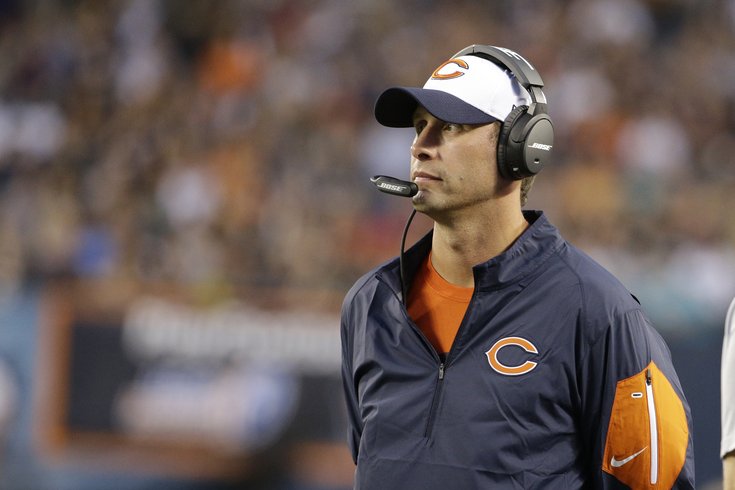 After the Philadelphia Eagles' loss last week to the Washington Redskins, quarterback Sam Bradford was asked if he wanted to be back in Philadelphia in 2016.

"I think throughout my career, I’ve learned that learning new offenses every year, it’s just hard to continue to improve," he said. "You are always learning. You are learning new verbiage, learning new plays, learning new systems. And I would really like to stay in the same one and have the opportunity to play a second year.”

Welp... Unless Chip Kelly gets a head coaching job elsewhere in the NFL and Bradford signs with that team in free agency, it would appear that Sammy Sleeves is learning a new playbook again in 2016. That makes his want to remain in Philly tenuous, at best. Adding to that, while Kelly certainly saw enough in Bradford to trade a second round pick for him last March, there is no guarantee that whoever the Eagles hire to be their head coach will share Chip's affection for him.

The likelihood that Bradford will re-sign in Philadelphia dipped significantly when owner Jeffrey Lurie decided to part ways with Kelly Tuesday night. If Bradford is not the Eagles' Week 1 starter in 2016, they will be starting the season with their sixth different quarterback since 2009.

Only one team, the Cleveland Browns, has had more during that span.

In fact, the Eagles' drastic instability at quarterback doesn't end there. The last time the Eagles had a quarterback start all 16 regular season games was 2008, when Donovan McNabb did it. After Alex Smith starts his 16th game this Sunday for the Chiefs, there will be only one team with a longer drought -- again, the Cleveland Browns.

Since 1991, the Eagles have only had four seasons in which their quarterback started all 16 games. Only one team -- once again, the Browns -- had fewer during that span, and their franchise didn't even exist until 1999. In other words, the only team with a more unstable quarterback position in the NFL than the Eagles has been the lowly, doormat Cleveland Browns.

The Eagles aren't winning jack until that changes.

In 1999, they hired Andy Reid and drafted McNabb, beginning a decade-plus long stretch of the most stability the Eagles have had at quarterback in team history. That era was also arguably the longest amount of sustained on-the-field success in franchise history despite falling short of the ultimate goal, a Super Bowl win.

The Eagles have a chance to marry up a new head coach with a rookie quarterback again this offseason. One head coach who has shown he can get the most out of the quarterbacks he has coached is Chicago Bears offensive coordinator Adam Gase.

Gase got his first offensive coordinator job in 2013 with the Broncos under defensive-minded head coach John Fox. In Gase's first season running the offense, Peyton Manning had arguably the best year of his slam-dunk Hall-of-Fame career.

Here is where Manning's 2013 numbers ranked against himself during his 18-year NFL career:

Manning's numbers understandably dipped a bit in 2014. After Fox and his staff were fired after the 2014 season, Manning's numbers fell off a cliff, as he has thrown for 9 TDs vs 17 INTs in 2015.

Fox and Gase landed in Chicago this season, where they began to get to work and Jay Cutler and Co. Again, under Gase, Cutler had easily the best season of his career. Here is where Cutler's 2015 numbers ranked against himself during his 10-year NFL career:

More impressively, Cutler's season was without stud wide receiver Brandon Marshall, who was traded to the Jets, and first round pick Kevin White, who was lost for the entire season with a shin injury.

Of course, as with almost any new coaching hire, there are risks.

With Gase, an obvious consideration is that he will turn just 38 years old in March. Handing the reigns to someone as young as Gase in the most media-intense and possibly fan-intense city in the NFL could be overwhelming. However, Lurie said during his press conference on Wednesday that he will not be risk-averse.

"I go back to the original hiring of Chip," said Lurie. "It was a bold choice. We knew what the potential pitfalls were. He was our first choice. It was a unanimous decision we all had in the hiring process that we should make that bold choice. I thought after 15 years of going in one direction, that there was a reason to do that. And I think whenever you make a bold choice, I'd hate to ever be risk-averse.

"I don't ever want to operate that way, whether it's acquiring a player or picking a head coach or whatever. It's much better to go for it than to just, you know, say, ‘Okay, well, other teams are doing it that way’ or something like that. That's not the way we've ever operated. So I think one of the things is when you make a bold choice, there's increased risk and sometimes it just doesn't work out when you take risks."

Typically, when talented coordinators are being mentioned for head coaching jobs, they tend to coach on playoff teams. That delays the interview process for those coaches. Gase's Bears, however, will be golfing in January much like the Eagles, and with Lurie getting a six-day head start on the rest of the league's firings, they can be in a good position to get Gase in their building first, if he is on their radar.

With a loss against the Giants this Sunday, the Eagles can potentially pick as high as ninth overall in the 2016 NFL Draft. While the crop of draft-eligible quarterbacks does not appear to include a bona fide consensus No. 1-overall pick-type like Jameis Winston or Marcus Mariota a year ago, it may have a good amount of depth in rounds 1, 2, 3 and beyond.

Marrying up Gase with a rookie quarterback -- a la Big Red and Donny Mac -- could be a logical step toward solving the Eagles' unstable (and currently unwinnable) quarterback situation.