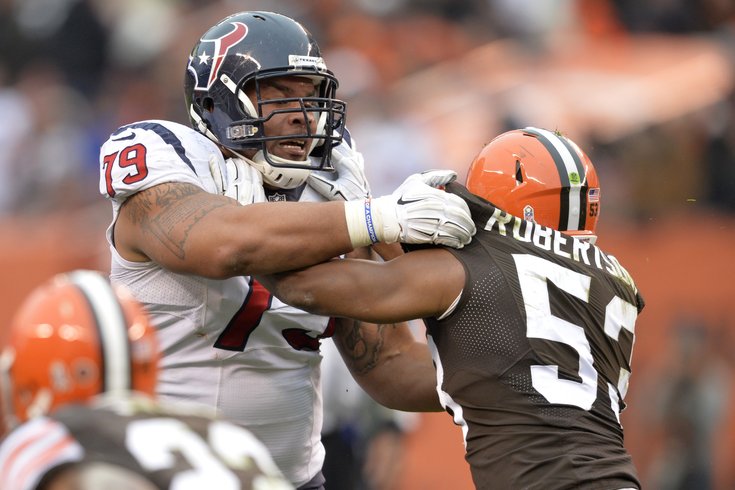 Brandon Brooks was the Eagles' No. 1 target among offensive linemen in free agency this year, according to head coach Doug Pederson, and the Eagles were able to land their guy.

When asked what appealed to him about Brooks, Pederson said, "Big, strong, athletic, road grater-type, nasty mentality and demeanor. He’s a guy that can get out on the perimeter and run. He’s smart. He has all the things that you look for in a guard that we need right now on this offensive line. He’s a leader and a guy that has a lot of games under his belt. It’s going to be a good fit for our line.”

They were so interested, in fact, that the three Eagles who are sure to start along the offensive line this season -- LT Jason Peters, C Jason Kelce, and RT Lane Johnson -- all reached out to Brooks to help recruit him.

"When things opened up on Monday, pretty much from the get-go, the Eagles let me know that I was their guy," said Brooks. "I felt wanted. Players on the team -- Peters, Kelce, Lane -- all texted, saying, 'Come here, we have an opportunity to build something great.'"

One of the things the Eagles' offensive line has lacked for quite some time is an interior lineman who can move defensive linemen off the line of scrimmage against their will. At 6'5, 335, Brooks could be that for the Eagles.

The Eagles' projected starting offensive line now looks like this: