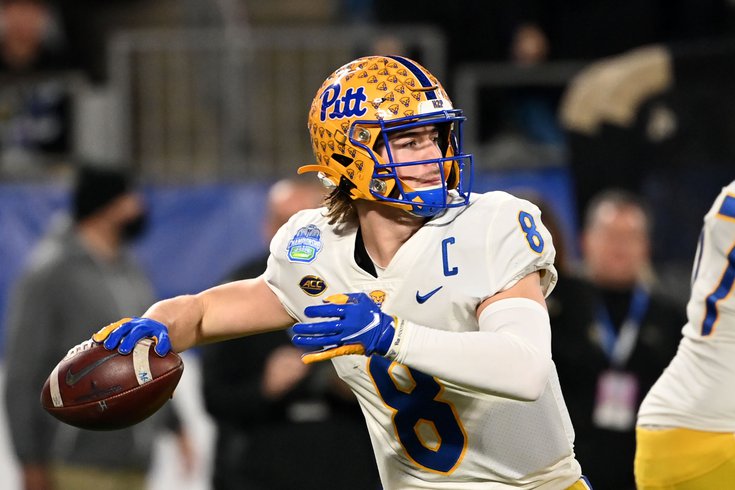 As you're well aware, the Philadelphia Eagles have three first-round picks in the 2022 NFL Draft, and 10 picks total, which should make mock draft season fun this year.

Pickett had an outstanding senior season during which he threw for 42 TDs vs. 7 INTs and a 67.2 completion percentage. He has very good pocket presence, mechanics, and when you watch him play you can pretty clearly see his competitiveness and toughness. His ability to escape the pocket, extend the play, and throw on the run gives me some Tony Romo vibes.

At the 2022 NFL Combine, Nick Sirianni laid out the four traits he values most in quarterbacks:

Pickett has a substantial edge over Jalen Hurts in the accuracy and arm strength categories, and he's no slouch in his ability to create.

The one big knock on Pickett is something he can't control — his Burger King hands, which measured in at 8.5 inches at the Combine. Some teams will care about that more than others.

There are some Eagles fans who would like the quarterback discussion to go away, but let's not fool ourselves. The Eagles had interest in trading for Russell Wilson and Deshaun Watson this offseason. They can say they love Jalen Hurts until they're blue in the face, and maybe then do, but they were looking to upgrade on him in the trade market and still could be in the draft.

The Eagles have shown interest in Pickett, as Howie Roseman traveled to Pitt to watch him play in person in November. They took him out to dinner after his pro day.

Kenny Pickett’s effort today was for all intents flawless. He ran through a 56-throw script, one that ran from anticipation throws to those that showed off his arm strength. He had meetings w/ eight teams from 9am-9:30pm yesterday (dinner was on the #Eagles!) and has more today.

I wouldn't normally advocate for a run stuffing DT in the first round, but if you have a chance to add a player with extremely unique size and athleticism measurables, he's a player who can perhaps develop as a pass rusher.

But even if Davis never becomes a guy who puts up big sacks numbers, he can still be very effective. He is a player that centers will not be able to single block, so he'll at least provide one-on-one matchups across the board against the pass when he's doubled. Against the run, if you plop this dude down in the middle of the line, thus allowing Jonathan Gannon to commit fewer resources toward stopping the run, he would make a lot of sense in the Eagles' defense.

Like DeVonta Smith, Olave has a slight build, he is an excellent route runner, and he makes difficult catches look easy, though he does not possess Smith's contested catch traits. He is more of a deep threat than Smith, however, as he has good speed and ball-tracking ability. He won't remind anyone of Deebo Samuel or A.J. Brown in the run after catch department.

The Eagles could use a big receiver opposite Smith, but their interest in trading for 6'1, 190-pound Calvin Ridley shows a willingness to just add good receivers instead of fixating on a certain type of receiver. And really, I don't see the harm in having two skinny guys who create a ton of separation and make life easier for their quarterback.

Mafe came in at No. 17 on Bruce Feldman's "freaks" list this past offseason.

He backed up that hype at the 2022 NFL Combine:

With David Ojabo having torn his Achilles, this draft's edge rusher depth took a hit. Since we've already profiled Purdue's George Karlaftis and Florida State's Jermaine Johnson in previous Eagles-only mock drafts (and we don't repeat players), this is a scenario where the Eagles are forced to address edge rusher in Round 2.

Andersen is one of the most intriguing prospects in this draft, due to his extremely rare versatility, size, and athleticism. He played quarterback and running back at Montana State before flipping to linebacker. In 2021, Andersen had 147 tackles (14 for loss), 2 sacks, 2 INTs, and 7 PBUs.

He also impressed at the Senior Bowl with a strong week of practice.

He’s still learning, but this is why you bet on those athletic traits. pic.twitter.com/hQRJWjzg17

Andersen has some learning to do at linebacker, but he has sideline-to-sideline range and can cover larger areas of the intermediate areas of the field where the Eagles got killed last season.

Hey, there's a theme here. Athletes! Woods is another one at the safety position.

Woods had 5 INTs in 2021, and 3 in 2020. We'll see what the Eagles do at safety through the rest of free agency, but Woods is a player with excellent speed who can play deep responsibilities.

Likely had a pair of very productive seasons to close his college career, and some ridiculous yards per catch averages from a tight end.

Likely finished second in the nation among tight ends in 2021 in receiving yards and touchdowns. A look:

The Eagles can use a second tight end to complement Dallas Goedert, and Likely could be a fun mismatch against linebackers.

The Eagles can use a younger, more durable version of Jordan Howard. Haskins is a big 228-pound between the tackles banger who is going to get you the yardage that is there, but isn't much of a threat for home runs.

He'll be a chain-mover in the NFL, and would be a good fit as a rotational back for any run-heavy offense.

The Eagles love them some versatile offensive linemen, and Tom played both at OT and C at Wake Forest. His home in the NFL will almost certainly be at center, and he brings outstanding athleticism to the position.

Give Jeff Stoutland a year to coach this guy up to eventually take over for Jason Kelce.

Penn State's Jordan Stout is another draft-worthy punter, who averaged 46.0 yards per punt in 2021. He also handled placekicking duties (he was just OK there), but will focus on punting in the NFL. Do we have punting highlights? You bet your ass we do.

Oh baby, that was fun.

Arryn Siposs turned into a Shankopotomous machine at the end of the season. The Eagles shouldn't lose their minds and use some sort of valuable resource on a punter, obviously, but in the sixth round? Sure, what the hell.