John McMullen: Inside the Eagles 'five-minute' chase of Deshaun Watson 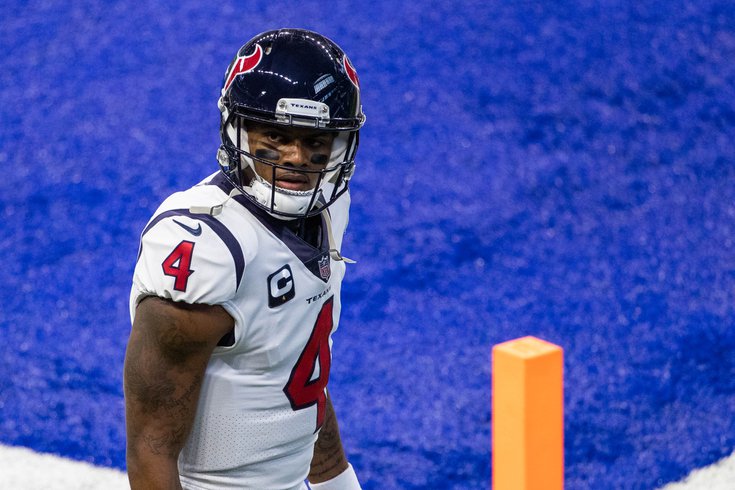 Deshaun Watson and his agent David Mulugheta may have pulled the string on one heck of a curveball but the final destination of Cleveland for the embattled and newly enriched quarterback was not an indication that the Eagles would have been considered had Jeffrey Lurie's organization kept pressing and matched the unprecedented fully guaranteed five-year windfall ultimately obtained from the Browns.

One perception surrounding Watson was not necessarily debunked but it was proven to be malleable in that the quarterback's preference to play in the Southeast was exactly that, a preference, not a hard-and-fast rule.

As for sizing up actual rosters of the perceived finalists — Atlanta, New Orleans — and the supposed original runner-ups — Carolina, and the Browns — that's a convenient spin.

Yes, the team who ended up offering the best financial package would also be regarded by most independent observers as the most talented of the bunch, something the savvy Mulugheta played up in an effort to paint Watson in the best light possible when it comes to the average fan's perception of wanting to win.

This was as the kids say about getting the bag in the form of the richest contract in league history: $230 million with every penny fully guaranteed over five years.

Had the Falcons, Saints, or Panthers gone to where Cleveland did financially, they would be in the winner’s circle, lesser roster or not. And the failure to acknowledge Houston’s role in all this is purposeful because of the tremendous leverage Watson had from his full no-trade clause. There was a baseline every team in the running needed to hit when it came to compensation and all four reached it, according to sources in South Texas.

The Eagles were dismissed very early in this process.

It had nothing to do with the talent in Philadelphia or any potential financial hangup because things never got far enough to talk turkey on money. When it comes to compensation, that part of the equation was never going to be an issue with Philadelphia, which has significant draft assets at its disposal.

Whether hyperbole or not, the phrase “being turned down in five minutes” was used by multiple NFL sources to describe the Eagles’ efforts, and what can be said categorically is that Philadelphia was dismissed very quickly when requesting a meeting with the talented QB.

Armed with the no-trade clause, Watson, presumably through Mulugheta, informed Texans GM Nick Caserio that they would not consider Philadelphia as a potential destination.

Despite all the rumors you may have heard over the closing days of this soap opera about the Eagles being a potential mystery team and Howie Roseman pulling off some magical subterfuge, there was no 3D chess in play, no secret meeting commenced or even scheduled.

The truth of the matter is the Eagles turned the page the minute the rules of the game were clearly defined by the Texans and Philadelphia was excluded from playing by the Watson camp.

The interesting part is why Watson was so steadfast in his refusal to come to Philadelphia from start to finish in this entire saga. The principles aren't going on record anytime soon but the strongly held belief around the league is that Watson's aversion to the Eagles had to do with his loyalty to Jalen Hurts.

Sources familiar with Watson's sentiments pointed to the relationship built between the two players in the offseason through the connection of working with the same QB trainer, Quincy Avery.

The old adage that it’s “show business” and not “show friends” would have only applied if Watson didn't have any other suitors because he simply didn't want to take an opportunity away from Hurts.

Whether the Eagles knew it or not, the moment Watson wasn't indicted on criminal charges by a Harris County, grand jury was the turning point. The floodgates opened and it became clear that there would be no shortage of teams chasing the embattled signal-caller by employing the greater the talent, the greater the tolerance equation.

That reality shut down the Eagles' only path to a superstar.

Had Watson and Hurts never cultivated their relationship, it's likely the Eagles would have gotten their meeting, been considered, and ended up like everyone else, however, beaten out by the Browns' historic contract offer.

By late last week, the prevailing thought around the NFL was that Watson, a Georgia native, would be returning home to Atlanta and the Falcons were certainly acting like a team preparing for Watson's arrival. At that point, per an NFL source, Mulugheta circled back to Browns, who had been previously informed they were out of the running, and asked if Cleveland wanted one more opportunity to sweeten their offer.

What came next was the diabetes-driving presentation where no other team in the history of professional football had ever gone before, an unprecedented fully-guaranteed commitment over five years for a player still facing 22 civil allegations of sexual misconduct, the court of public opinion that awaits, and a likely short-term suspension at the very least coming from Roger Goodell.

‘All in’ is underselling where the Browns went for Watson and it's almost inconceivable that is a place the Eagles would have ever gone even if afforded the opportunity.