Eagles players requested to practice in pads this week

In his Tuesday press conference, Doug Pederson revealed something of an interesting nugget about his players. According to Pederson, players came to him and requested to practice in pads this week, after conducting a week of walk-throughs with no hitting at all leading up to the Week 17 finale.

"This is something that the players want," said Pederson. "It's not a punishment thing. It's not coming directly from me. It's what the players want. I listen to my guys. I think they understand that there is a sense of physicality that we have to get back to. I'm not saying we're not there because obviously football is a physical game, but I think there is a sense over the course of a few weeks when you've been in shells, pad level begins to rise, and intensity sometimes can be minimized.

"So you get back into pads and it sort of refocuses the guys a little bit. It's not like we're going to tackle. It's not a training-camp-type-of practice. The fact of just having them on, banging around on one another, but still protecting each other, I think can be a nice asset for us going into our first game."

In Pederson's time in the NFL, he has seen a variety of ways other head coaches have handled practices this late in the season.

"Everybody is different," he said. "Some people give the entire week off; others do meetings; some people just do walk-throughs; some people do shells. Everybody is a little bit different. I go back to my days even when I played in Green Bay. There were times when coaches put us in pads for a day or for a practice during a bye just to get everybody back on the same page.

"This is the decision that I've made, and we'll stick with that."

On Wednesday, here they were, in pads (though they were inside the bubble, making it somewhat less badass): 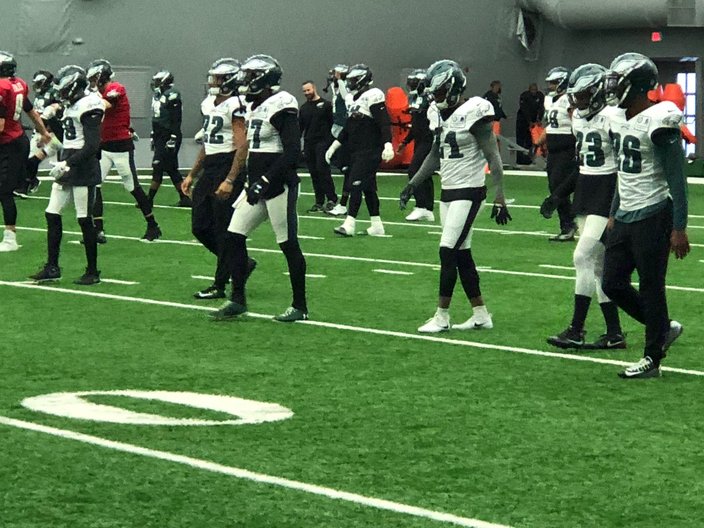 I'm not often one for analysis on intangibles like a quarterback having 'it,' or a team having 'the heart of a champion.' Still, I will say that the Eagles' desire to practice in pads -- and thus hit at a time when everyone on the team has some kind of bump or bruise, when they maybe didn't otherwise have to -- shows that this team is willing to do whatever they can to put themselves in a better position to win.