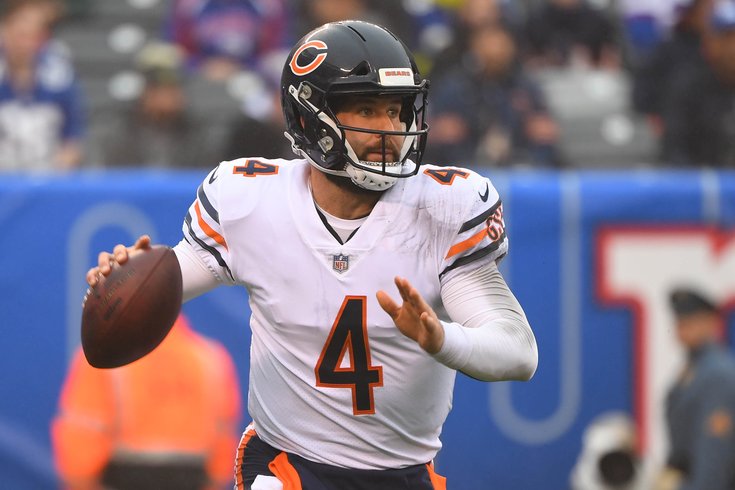 The Eagles may (eventually) be pinning their playoff hopes on Chase Daniel next Sunday.

Two Week 17 games of importance to the Philadelphia Eagles were moved to the late afternoon from their originally scheduled 1:00 p.m. kickoffs next Sunday. They were Eagles at Redskins, and Bears at Vikings.

The NFL does this, of course, in an attempt to keep every team that has anything to play for in Week 17 motivated. For example, if the Bears lose on Sunday or the Rams win, the Rams would earn the No. 2 seed in the NFC, and a first round bye. If the Bears lose during the 1:00 p.m. games, the Rams, playing at 4:25 p.m., would likely rest their starters and play their backups, having already secured the bye.

So Bears-Vikings got moved.

So Eagles-Redskins got moved too.

Unfortunately for the Eagles, their playoff odds are hurt by the NFL moving the Bears-Vikings game. Had Bears-Vikings just stayed at 1:00 p.m., the Bears would have almost certainly played their starters and gone all out for a win, with a chance at a first-round bye still on the line. By moving it to 4:25 p.m., their motivations could potentially change, in-game.

What do I mean by that? Well, if the Rams are blowing out the 49ers early (as they did earlier this season), the Bears could obviously see that, and decide that because the first-round bye is now off the table, they'd be better served to pull (and preserve) their starters.

Adding to their likelihood of mailing in a loss is the fact that the Bears' likely first round playoff opponent will be, you know, the Vikings. It would probably behoove the Bears not to show their best game plan ideas in a Week 17 game made meaningless by the Rams-49ers result out west, when they're going to be facing the same exact team the following week in an elimination contest.

Not to mention, Bears quarterback Mitchell Trubisky recently missed two games with a shoulder injury, which has to be on the Bears' minds.

In you think that all sounds like a reach, tell that to Vegas. The Vikings opened as 7-point favorites in sportsbooks, despite being an inferior team to the Bears.

The Eagles wouldn't have to worry about any of this stuff had they won more games. Nevertheless, while the NFL's flex of Vikings-Bears could keep more viewers tuned into the Rams-49ers game, it potentially comes at a competitive disadvantage to the Eagles.

Update: So it appears that the Bears will indeed be scoreboard watching.

Matt Nagy says the Bears will have to be "smart" against the Vikings - as in, if the Rams are blowing out the 49ers at halftime, if that means potentially pulling starters for the second half of the Vikings game.