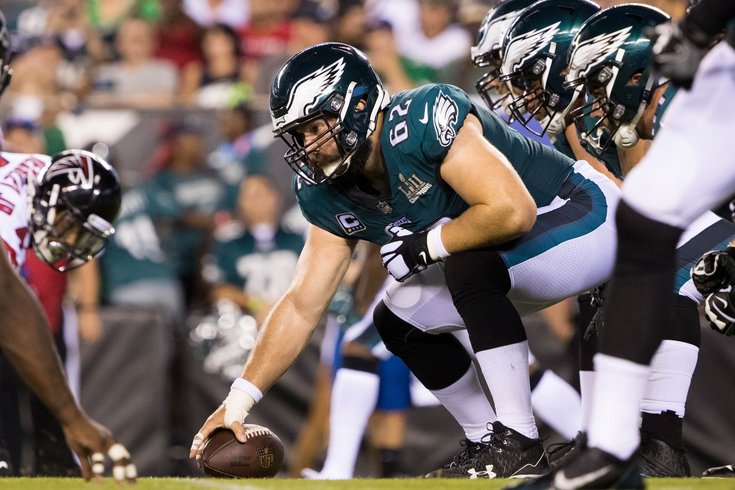 Jason Kelce is a new addition to the Eagles' injury report.

As usual, the Philadelphia Eagles will head into Sunday's matchup with a laundry list of injured players. However, their opponent, the Washington Redskins, are arguably even more banged-up than the Eagles, for a change.

• QB Carson Wentz (back): Wentz is obviously done for the rest of the regular season, and also probably for the playoffs, should the Eagles make it that far. That said, the team has not yet placed him on IR, so they have not yet shut him down for the season.

• CB Sidney Jones (hamstring): Jones has suffered several setbacks this season to a hamstring that has never really gotten better.

• LG Isaac Seumalo (pectoral): Seumalo was injured against the Cowboys, and Stefen Wisniewski filled in at LG. Wis has faced very good interior defensive lines in the Rams and Texans since he has retaken his job as the starting LG.

• WR Mike Wallace (ankle): Wallace began the season as the No. 2 receiver, as something of a replacement for Torrey Smith in the speed receiver role, but he broke his fibula against the Buccaneers Week 2, and has been on IR ever since. The team activated Wallace off of IR on Monday.

• OT Jason Peters (quad): Peters only played five snaps against the Texans, as he had to leave early with a quad injury. Doug Pederson said on Wednesday that Peters was likely to play on Sunday.

• C Jason Kelce (knee): Kelce is a new addition to the injury report. With Seumalo already out, Wisniewski would likely slide over to center, and Chance Warmack would play LG if Kelce can't go.

• LB Jordan Hicks (calf): Aaaaaaand Hicks is back on the injury report after not appearing on it last week.

• DE Michael Bennett (foot): Bennett has been the Eagles' most productive edge rusher this season, as he has collected eight sacks and two forced fumbles. Bennett has played through pain for the last month, and it is expected that he'll do the same against the Redskins.

• OL Ty Nsekhe (knee): Nsekhe is a backup OG/OT on a team already devastated by injuries along the offensive line.

• WR Maurice Harris (concussion): Harris has 28 catches for 304 yards and 0 TDs. The Redskins are already without WRs Paul Richardson and Trey Quinn, as noted below.

• TE Vernon Davis (concussion): The Redskins will likely be without their top two tight ends, as Jordan Reed was placed on IR this week.

• WR Josh Doctson (illness): Doctson should be a go, but if he can't play, the Redskins will be without five of their top six receiving yardage leaders.

• OG Tony Bergstrom (knee): Yet another banged up guard.

• QB Alex Smith (IR): Heading into the game in which he was injured, Smith had led the Redskins to a 6-3 record, throwing for 10 TDs and 3 INTs, with a quarterback rating of 90.7. The Redskins' backup quarterback is Colt McCoy, an eight year veteran with a career starting record of 7-18. McCoy is almost like a less-talented version of Smith. The Redskins didn't carry a third quarterback at the time of Smith's injury, but they have since signed Mark Sanchez.

• QB Colt McCoy (IR): McCoy was Smith's backup. He broke his fibula Week 13 against the Eagles.

• TE Jordan Reed (IR): The Redskins' leading receiver (with a meager 558 yards) used to kill the Eagles, but he has been neutralized in recent years by Malcolm Jenkins.

• RG Brandon Scherff (IR): Scherff made each of the last two Pro Bowl rosters, but was lost for the season after injuring a pectoral muscle. He was replaced in the lineup by Tony Bergstrom.

• LG Shawn Lauvao (IR): In the same game the Redskins lost Scherff, they also lost Lauvao for the season with a torn ACL. Lauvao was replaced by Jonathan Cooper.

• RB Derrius Guice (IR): Leading up to the 2018 NFL Draft, Guice was a player commonly mocked to the Philadelphia Eagles, who were thought to be in the market for a running back. Instead, Guice was passed over by the Eagles and the rest of the league, likely due to what was considered to be at the time, “personality concerns.” He ended up being selected in the second round, 59th overall, by Washington. After an encouraging offseason, Guice was lost for the season with a torn ACL, and the Redskins signed Adrian Peterson to replace him.

• CB Quinton Dunbar (IR): Dunbar was a starting corner who tried to play with pain in his leg, but he was obviously unable to run, and was exposed as a result by Amari Cooper of the Cowboys, among others. He probably should have been shut down sooner than he was.

• S Montae Nicholson (NFI): Nicholson appeared in 14 games for the Redskins this year, starting 7. He had 41 tackles, on pass breakup. He was arrested and charged with assault last week.

• WR Trey Quinn: Quinn was a slot receiver and returner for the Redskins at times this season. On the season, he had 9 catches for 75 yards and a TD.

• OT Geron Christian (IR): Christian was the Redskins' third-round pick in 2018. He played at LT in relief of Williams at times this season. Should Williams go down against the Eagles, Ty Nsekhe would fill in.

• OG Jonathan Cooper (IR): After Scherff and Lauvao went down, the Redskins signed Cooper, who started four game before going down with a torn biceps.

• LB Reuben Foster (Commissioner's exempt list): Foster was released by the San Francisco 49ers on Sunday after being arrested on charges of domestic violence late Saturday night at the Niners' team hotel in Tampa. It was his third arrest in 2018, and second accusation of domestic violence in the last year. The Redskins scooped Foster up off of waivers without even contacting the police for more information of his arrest. Instead, they claimed to have spoken with former teammates of Foster's at Alabama who are presently on the Redskins' roster, of which there are five. It was later uncovered by the Washington D.C. media that the Redskins only spoke with two of Foster's former Bama teammates. What a joke of a franchise.